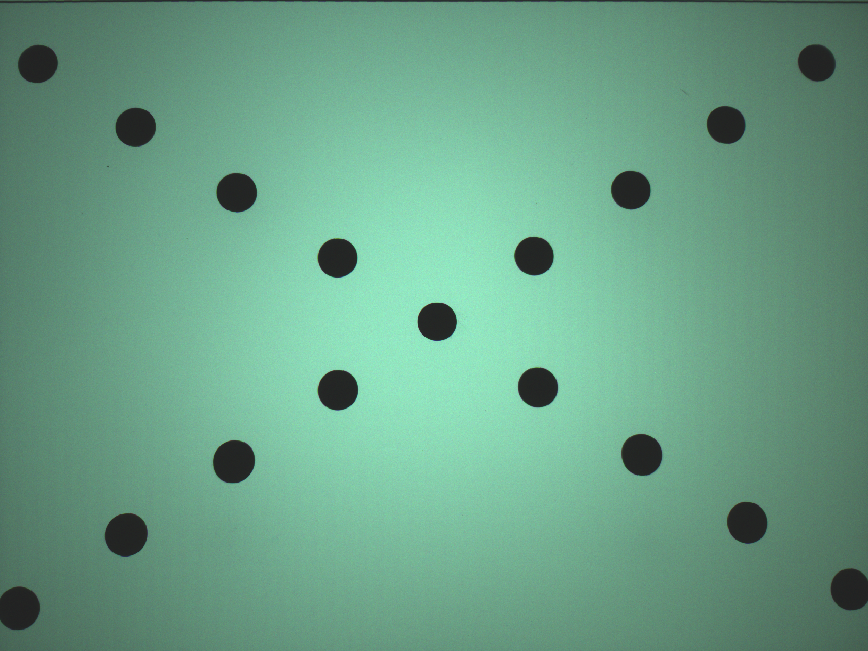 Last month, we posted Considerations when evaluating a Near Infrared camera. We reviewed important considerations for a NIR camera test setup and demonstrated how sharpness can vary between visible and NIR wavelengths. This post continues on that theme by testing Veiling Glare (Flare) using the ISO 18844 method.

What is Veiling Glare or Flare?

Flare occurs to some degree in all lenses and optical systems. Stray light that enters the lens is reflected among the optical components and fogs the image. Below is an example of very bad lens flare. 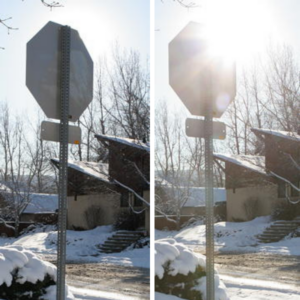 An example of bad flare (right).

In these images, we can see how Flare is showing light in the image where there should be none. Flare in optical components is a major limiting factor for a systems overall dynamic range. Sensors often can boast dynamic range >120 dB. In practice, the system cannot get close to that range because of the effects of flare. For more information, please read our documentation on Veiling Glare (Flare).

Setting up the NIR camera test

For this test, we will be using the same Raspberry Pi camera and Imatest light source from our previous post. The major differences are the chart and image processing. The ISO 18844 chart features numerous black dots arranged in an X pattern according to the standard. The chart is made out of clear polyester film and the dots are made from Acktar black to prevent reflections that would ruin the test.

The other major difference for this test from our previous one is the change in processing. The image needs to be linear. Nonlinear processes such as auto white balance and jpeg compression can influence the results if enabled. Fortunately, it is possible to get raw sensor data from the Raspberry Pi Camera V2. This recipe was used to capture a raw image from the Pi.

Images of the flare chart were captured under two lighting conditions; visible and NIR (850 nm). 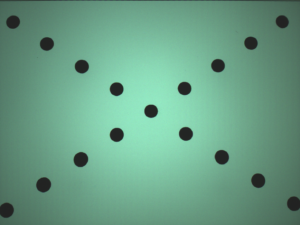 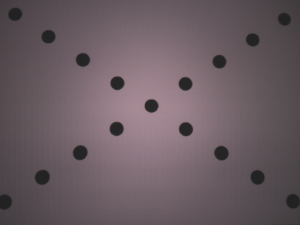 Note: These images look different than normal images captured on the Pi because this is raw data. There is no auto white balance, gamma, or other processing done. For more information on reading raw images with Imatest see our documentation.

We then analyze each image with the Uniformity module in Imatest Master 5.1.9. In the Uniformity Settings dialog we want to select “ISO 18844 flare method C: Linearize with Color Space”. For this analysis, we can ignore the rest of the options.

Imatest will display several plots related to uniformity but we are only interested in the ISO 18844 flare plot for this test. The plots for each of our measurements can be seen below. 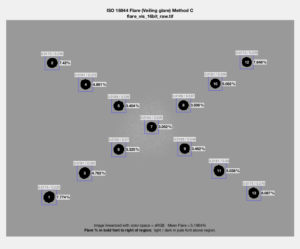 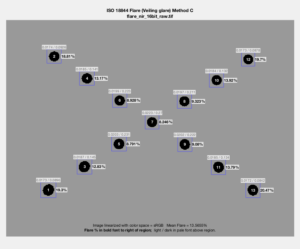 The plots show the % flare for each dot according to the 18844 calculation as well as the Mean Flare at the bottom. From the plots, we see that Mean Flare for the visible light sources is 5.2% and 13.6% for the NIR.

Similar to our previous test on sharpness, there is a drastic change in quality when the wavelength of light is varied. The ISO 18844 Flare increases more than 2.5 times in the NIR versus the visible. The expectation then is the NIR camera has a diminished dynamic range due to the increased flare. In applications such as security or automotive cameras, the diminished dynamic range could significantly decrease the effectiveness of the system to detect obstacles or intruders. The large change in quality shows how important it is to construct a test environment that matches the application of the imaging system. This is especially true when the system is multi-purpose, such as a security camera with a day (visible) and night (NIR) modes. A good follow up to this test would be to measure the dynamic range of the system in either lighting condition.

This entry was posted in Educational, Test Setup.