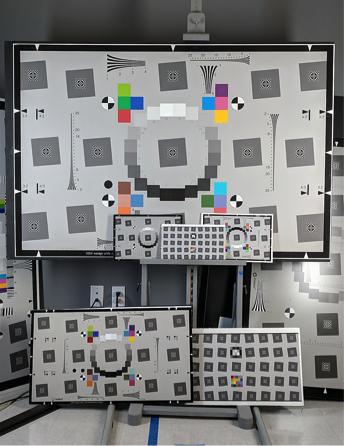 Camera MTF (sharpness) measurements are subject to a number of variations, some of which, like noise, are random and difficult to control, and some of which are systematic and can be corrected. Variations caused by limitations in chart sharpness are in the latter category. These variations are also affected by the Field of View (FoV) of the image used to test the camera, which is closely related to chart size for charts designed to fill the camera frame. For a given print technology, increasing the FoV, which typically means increasing the spacing between the chart and camera, will increase the measured MTF— making it more accurate. However, there are many practical situations where space is limited and small FoVs are called for, and chart sharpness can significantly affect the measurements. This post describes a method for quantifying and correcting such measurement variations. The method has the following steps.

There is little mention of test chart sharpness in the literature, perhaps because when the ISO 12233:2000 standard was created, high-resolution cameras had only about one megapixel, and hence it was easy to print adequate test charts.

View the video below for Norman Koren’s talk on Compensating MTF Measurements for Chart Quality Limitations. This article describes the concept in detail.

The first step in compensating camera MTF measurements is to measure the test chart MTF. This should be done by photographing the same features used to measure camera MTF. We describe the process for slanted-edges, but other patterns, such as Siemens stars, could also be used. Since we have found that edge sharpness in inkjet charts can depend on the edge orientation, we measure up to four edges (the left, right, top, and bottom of a dark square on a light background).

We performed our chart measurements with a 24 Megapixel APS-C camera that has a 23.5×15.6mm sensor with a 3.88-micron pixel pitch. We used a mechanically-focused 60mm prime macro lens that had a scale that displayed magnification. This enabled us to maintain constant chart magnification mchart for our tests, which is difficult to accomplish with lenses that have electronic focusing. We used mchart = 1:2 (0.5×) for inkjet charts and mchart = 1:1 (1×) for photographic paper and film charts, which are sharper. Chrome-onGlass charts are too sharp to be measured with this setup. 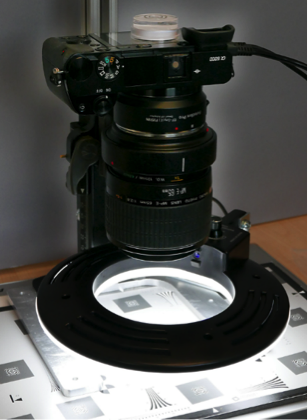 The setup (Fig. 1) consists of a custom-machined aluminum base and a sturdy aluminum extrusion column. Fine focus is controlled by a micrometric positioning sliding plate. The lens is fixed at mchart = 1:2 or 1:1. Simple adjustments are used to keep the sensor plane is parallel to the test chart. A non-flickering LED ring light is used for reflective charts; a light box is used for transmissive charts.

When calculating chart MTF it is important to select large enough Regions of Interest (ROIs) to obtain consistent results. For inkjet charts, which can have rough edges, especially when photographed at chart magnification mchart = 1:1 (1×), MTF50 can vary by as much as ±10% for small ROIs. To obtain good measurement consistency, we photographed inkjet charts at mchart = 1:2 (0.5×), using region sizes ≥ 900×1300 pixels. For chart media other than inkjet, all of which are finer, we used mchart = 1:1.

Fitting measured MTF to an equation

The measured chart MTF must be fit to an equation in order to reliably perform MTF compensation, where the measured camera MTF is divided by the model of the chart MTF projected on the sensor. We have chosen a function that (a) is simple– only two parameters, (b) is a good match to our chart MTF measurements, and (c) is guaranteed to decrease at high spatial frequencies.

Parameters a and b are stored in a file along with metadata (the name of the test chart image file, chart magnification mchart, date, etc.) This file is read into the analysis program when chart compensation is to be applied. We have found that, apart from old charts made with unknown printers and settings, charts don’t need to be measured individually. A compensation file based on media, printer type, and print settings should be sufficient.

Fig. 2 illustrates an MTF measurement for a horizontal slanted-edge on an inkjet chart photographed with mchart = 0.5×. The upper curve shows the average edge profile. The rise distance (14 pixels) is large enough so that camera software sharpening will not affect the results. The lower plot shows the measured MTF (bold black curve) and the fit to the MTF (bold cyan curve) from Equation (1) for f < f30. The parameters for this fit are a = 0.10507 and b = 0.09407. 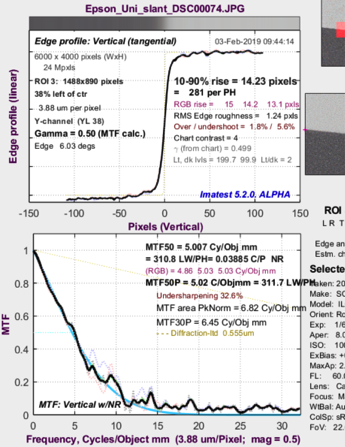 Curious artifacts sometimes appear in chart MTF measurements. Figure 3 is the MTF of an edge from a chart printed with the edges along the directions of paper and print head motion (not slanted). Test charts printed this way are cut slanted. A strong MTF response peak, visible around 13.5 Cycles/Object mm, appears to be caused by periodicity in the inkjet dots. (It’s not present when edges are printed slanted.) Fortunately, it’s well outside the analysis passband as well as the frequencies used to calculate a and b in Equation (1). 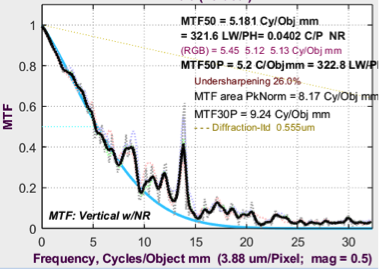 There are sometimes surprises in the MTF measurements. Chart MTF for photographic film printed on an LVT (Light Valve Technology) printer have a response indicative of sharpening (Fig. 4), apparently caused by uneven depletion of the film developer near edges—familiar to the author from his wet darkroom days. Note that the curve from Equation (1) (cyan) is a good match to the MTF curve, which has a sharpening bump. 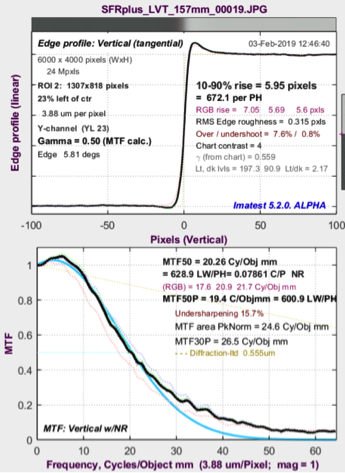 To calculate MTF compensation, the chart spatial frequency in Cycles/Object mm, fchart, must be transformed into Cycles/Pixel (C/P) on the image sensor. For test magnification mtest,

The MTF of the chart projected on the image sensor is:

Finally, the chart-compensated MTF is:

Limiting the minimum value of MTFdiv to 0.3 prevents excessive high-frequency noise boost. And as we have shown in Fig. 3, chart MTF measurements at frequencies where MTF drops below 0.3 (f > f30) can be strongly affected by chart noise (especially for inkjet charts), and hence are not reliable.

The effects of chart compensation were tested using a 10-megapixel digital camera (a Panasonic Lumix LX5 from 2010) that had the following:

FIGURE 5. SOME OF THE TEST CHARTS USED TO VERIFY MTF COMPENSATION

Fig. 5 illustrates the two types of slanted-edge chart used in our testing: Imatest SFRplus (a grid of slanted squares with bars at the top and bottom) and eSFR ISO (an enhanced version of the ISO 12233:2014 edge SFR chart). Both charts have 4:1 contrast slantededges, as recommended in ISO 12233:2014. Sizes varied over a range greater than 10:1. These charts were printed over several years on a variety of media— inkjet and photographic paper (reflective), and color photographic film (transmissive).

The reported Fields of View (FoVs) are typically slightly larger than the active area of these charts. Both chart types have geometrical features that facilitate the calculation of test magnification mtest. For each image, four edges — Left (L), Right (R), Top (T), and bottom (B) from the square closest to the chart center — were analyzed for compensated and uncompensated MTF.

Since we didn’t know the history of the charts, MTF for sample edges was measured individually for each chart.

MTF measurements in Figures 6-9, each from an edge near the center of four very different test charts, illustrate the effects of chart MTF on results. Uncompensated MTF is shown as a magenta line. Compensated MTF is a bold black line. MTFdiv is a cyan line. MTF50 (the spatial frequency where MTF drops to 50% of its low-frequency level) is the key summary metric for comparing results. 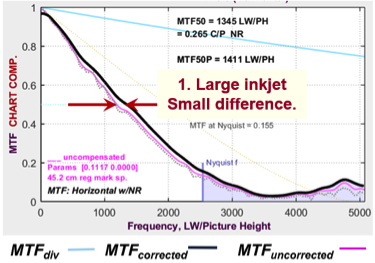 The large inkjet chart in Fig. 6 (147×97cm Field of View FoV) has MTF50 = 1166 LW/PH (uncompensated) and 1345 LW/PH (compensated). Correction makes only a small difference in the MTF measurement, as expected. The MTF50 difference is largely caused by a small noise-related response bump. 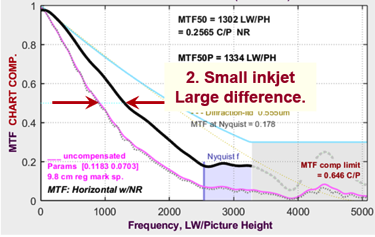 The small inkjet chart in Fig. 7 (32×21cm FoV) has MTF50 = 922 LW/PH (uncompensated) and 1302 LW/PH (compensated). Correction makes a significant difference. Results would be inaccurate without it. f30 is far enough above the Nyquist frequency to ensure good measurement results. 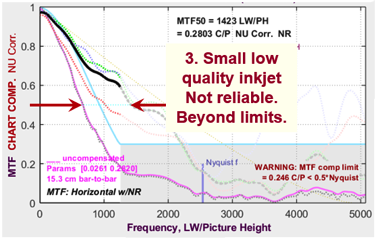 The small, low-quality inkjet chart in Fig. 8 (25×17cm FoV) has f30 well below the Nyquist frequency. Results are not reliable. This chart is inadequate for measuring the quality of this camera system. 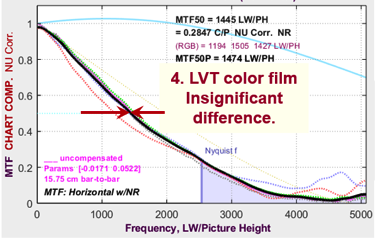 Each group of five bars represents MTF50 results for slanted edges from different charts. Groups are labeled by the edge near the image center used for analysis. The four groups on the left (L, R, T, B) contain uncompensated MTF50. The four groups on the right (L comp, R comp, T comp, B comp) contain the compensated MTF50 of the corresponding edges. 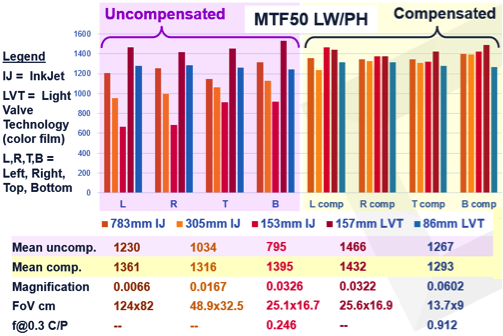 The medium and small inkjet charts showed the greatest improvement. The small LVT chart may have had consistently lower corrected MTF50 because it had a larger magnification than the other charts, which might have affected lens performance. 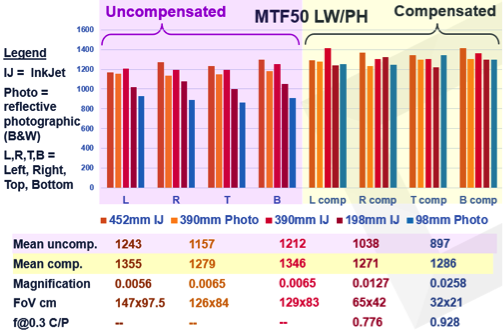 The key takeaway from Figures 10 and 11, summarized in Table 1, is that compensated results are larger and have a lower standard deviation σ, i.e., they are more consistent and hence more accurate.

Equations (1) through (5) can be used to predict the suitability of a test chart for a specific application.

We should note that our guidelines for chart suitability assume that the camera is relatively sharp, i.e., not out of focus or blurred for another reason, such as poor lens quality. A reasonable criterion for a “sharp camera” is that it makes good use of available pixels, which would be the case when the unsharpened MTF50 > 0.1 Cycle/Pixel (C/P). Typical values are around 0.15 – 0.3 C/P for high-quality cameras.

After running numerous images, we developed the following guidelines for chart suitability, based on the projected chart MTF at the Nyquist frequency (0.5 C/P), MTF@ fNyq, on the image sensor. 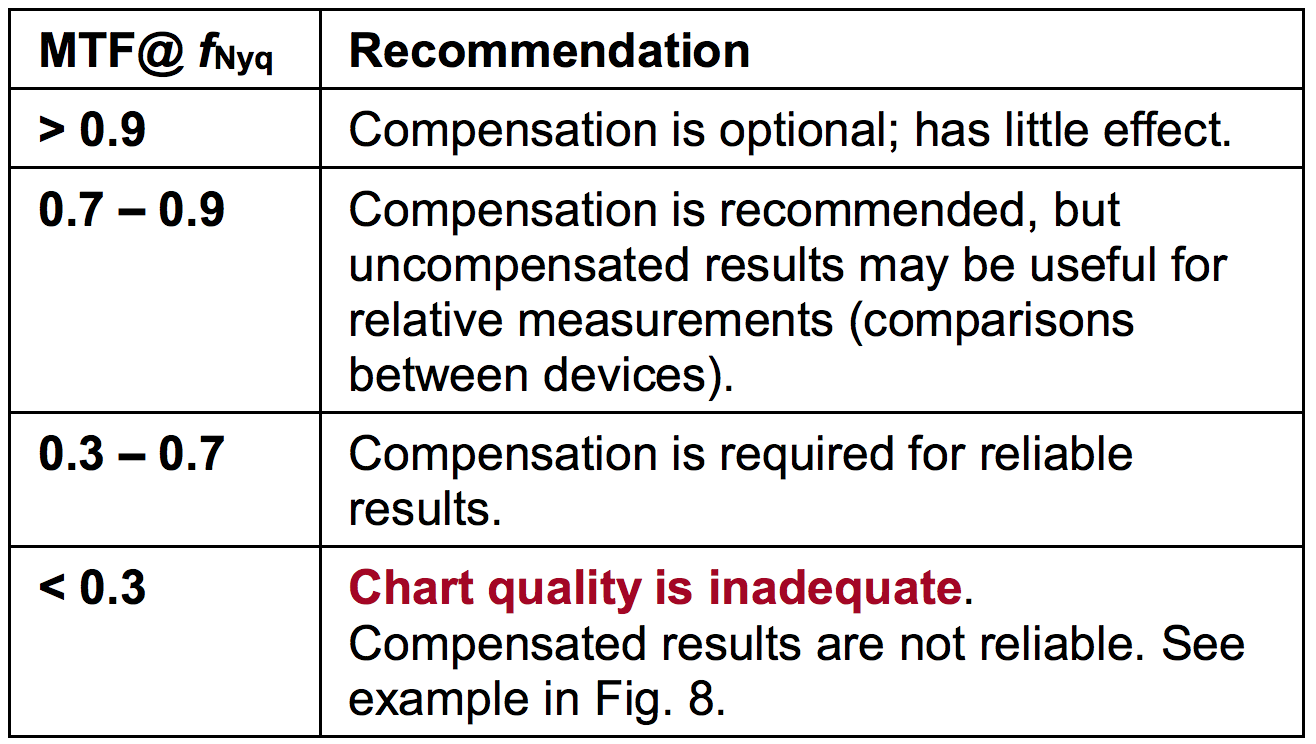 Fig. 12 shows results of a test chart suitability calculation for the chart/camera combination of Fig. 7. The compensation file had a = 0.1138 and b = 0.07027. Three of the following four parameters are manually entered.

In typical operation the three geometrical parameters (vertical field, µm per pixel, and sensor height) are entered, and magnification mtest = sensor height / vertical field. From Table 2, we see that the key result, MTF@ fNyq = 0.41, indicates that the chart is being used close to its operating limit (MTF@ fNyq = 0.3), and MTF compensation is definitely required. 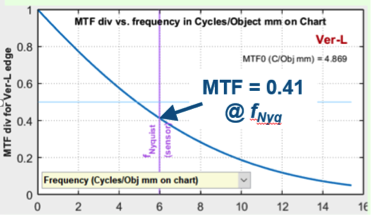 Analysis is not reliable at spatial frequencies where the test chart MTF projected on the image sensor, MTF@ fNyq, drops below 0.3. This is well beyond the normal recommended limits.

Greater care is required when analyzing chart measurements. The correct compensation file should be specified and the correct test magnification mtest (or geometric parameters for calculating mtest) must be entered.

Chart compensation does not (yet) work well for strongly barrel-distorted (fisheye) images, where radial magnification is a function of distance from the image sensor, and hence radial and tangential magnification may differ.

Noise at high frequencies– especially above fNyq – may be strongly boosted. The response above fNyq should usually be ignored.

MTF compensation improves the consistency and accuracy of camera MTF measurements made from different test charts (often at different locations), especially when charts are used near their megapixel limits. Some MTF variation, primarily due to noise, remains after compensation. In our verification tests we may have observed some MTF variation caused by differences in lens performance at different test magnifications.

MTF compensation files should be created for each printer/media/setting combination. Except for old charts where these details are not known, charts don’t need to be measured individually. We have determined two limits related to MTF compensation:

We have been using the chart MTF measurement techniques described here to improve the quality control of our printed test charts. 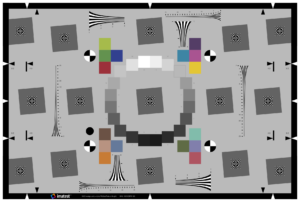 This entry was posted in Educational, Test Setup.