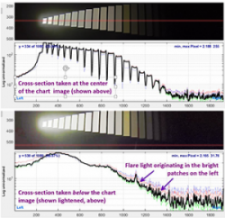 A camera’s Dynamic Range (DR) is the range of tones in a scene that can be reproduced with adequate contrast and good signal-to-noise ratio (SNR). Camera DR is often limited by flare light, which is stray light in the image, primarily caused by reflections between lens elements. Flare light reduces DR by fogging images; i.e., washing out detail in dark areas.It is the primary reason that the DR of cameras (which include lenses) is poorer than that of image sensors, which can be up to 150dB (30 million:1) for recent HDR (high dynamic range) sensors.

In the past 2 years we’ve learned that flare light in test chart images could, in theory, be mistaken for the image of the test chart, resulting in exaggerated DR measurements. The situation became real in mid-2019, when we started seeing actual images where this error occurred. By studying these images, we have developed techniques to guard against exaggerated Signal-to-Noise Ratio (SNR) measurements caused by flare light. We describe these techniques here.

We recognize that some customers may actually prefer exaggerated measurements because they yield very HDR numbers—sometimes over 120dB—that approach the specifications of HDR sensors and look good in marketing materials. The reduced but realistic DR measurements obtained when the effects of flare light are removed may make some of these customers uncomfortable. We will do our best to deal with their objections.

The effects of flare light

Flare light can be illustrated with an image of the XYLA chart—a precision HDR test chart with a linear configuration—that consists of 21 gray scale patches with Optical Density steps of 0.3. The image is from a low-cost “black box” camera.

The upper cross-section plot, made with the Image Statistics module, is taken at the center of the XYLA image. Flare is most obvious in the image and as a decay in the cross-section plot to the left of the brightest patch. 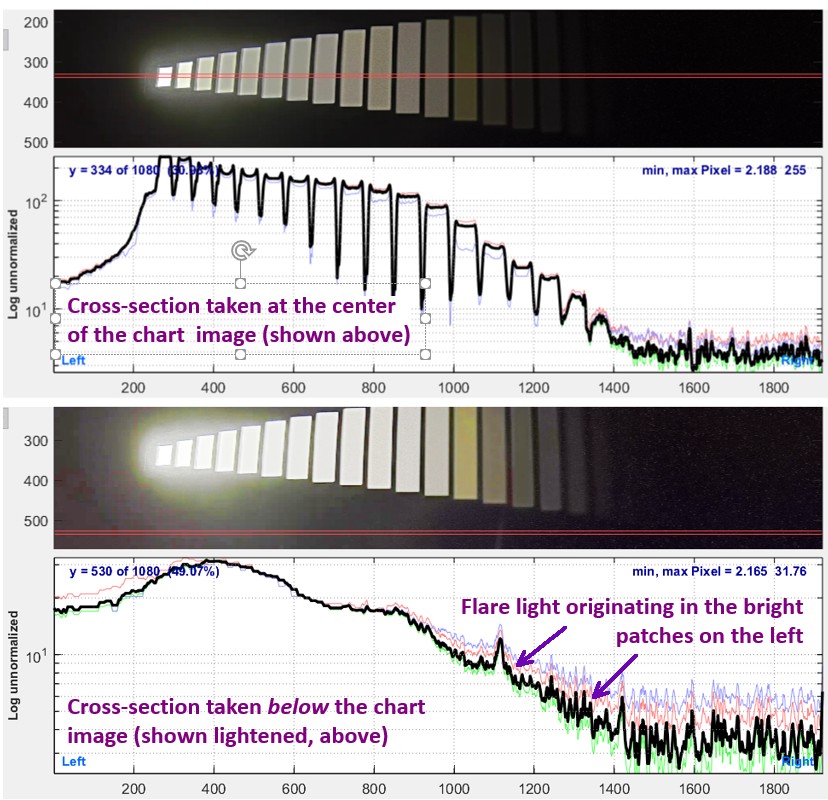 XYLA image (from the same image; the lower is lightened) and corresponding cross-section plots

The lower cross-section was taken outside (below) the active chart image, which is shown lightened above to make flare light more visible. The variation in pixel level on the right side of the chart (x between 800 and 1600) is caused by flare light diffusing from the brightest patches on the left.

If the flare light were any worse, it could easily have been mistaken for a signal from the chart itself, leading to an false DR measurement.

Flare light can be extremely complex. It can add an offset to the image (often called “veiling glare”), which is difficult to distinguish from a black level offset in the image processing pipeline. Most of the time it is largest near bright patches, then decreases with distance from these patches. The rate of decrease is rarely a well-behaved exponential. 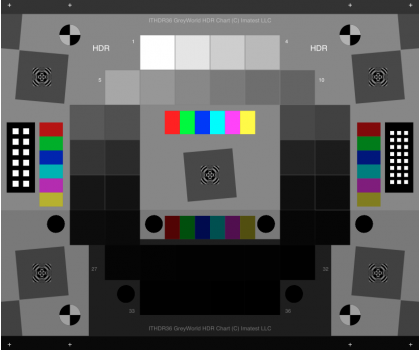 The test charts recommended by Imatest for measuring DR are transmissive (i.e., backlit) charts with (approximately) circular patch configurations; i.e., those that are not linear (like the XYLA chart, shown above). The two- or three-layer High Dynamic Range Chart, shown on the right, comes in several versions. Because photographic film charts are not manufactured with consistent patch densities, a reference file is required when these charts are used.

Until recently, most of the DR images we analyzed came from DSLR or mirrorless cameras that had relatively low flare light. The recent images we’ve seen with severe flare light are from inferior cameras. We have not determined exactly why the flare light is so much worse; it might be due to inferior coatings in the multi-element lenses or less baffling in the barrel of the lens.

Here are examples of results from high-quality cameras. Click on the thumbnails below to view full-sized images. 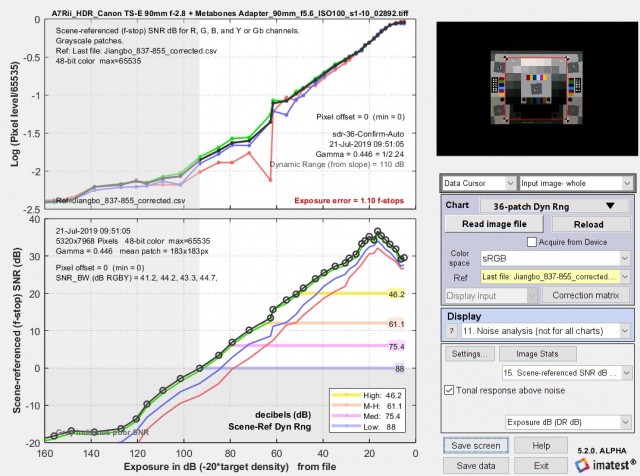 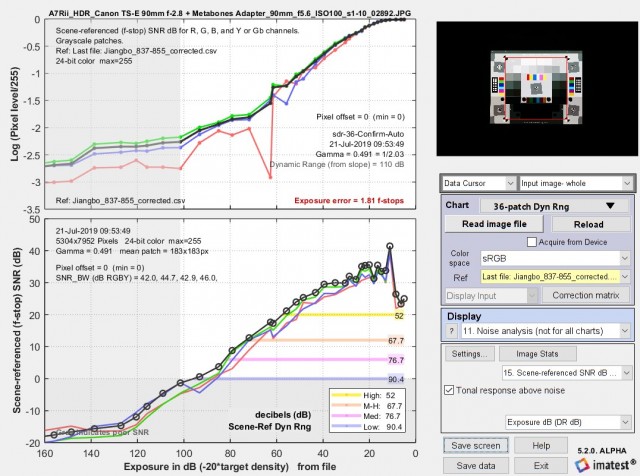 The four images are for 48-bit RAW (or TIFF derived from RAW) and 24-bit JPEG files captured on the Sony A7Rii camera with two very different lenses:

As expected, the 90-mm T/S lens has significantly better DR, and the JPEG files had more of a response “shoulder” (an area of reduced slope in the lighter part of the image). But there is one surprise. The DR of the JPEG images is comparable to the raw images—apparently because gamma encoding, which decreases the number of pixel levels in bright regions and increases it in dark regions, extends DR beyond what would be expected for a linear 8-bit (256 level) file.

Note that in three of the four images above, the low quality DR is lower than the DR from slope; they are very close in the remaining image. We don’t recommend the use of slope-based DR by itself (because it often extends well beyond the region where SNR = 0dB (Signal/Noise = 1); i.e., it includes regions where poor SNR causes noise to completely mask image detail.

The differences between the DR of the two lenses (medium and high quality) seems to be minor when compared to an image from a low-cost “black-box” camera we recently received. 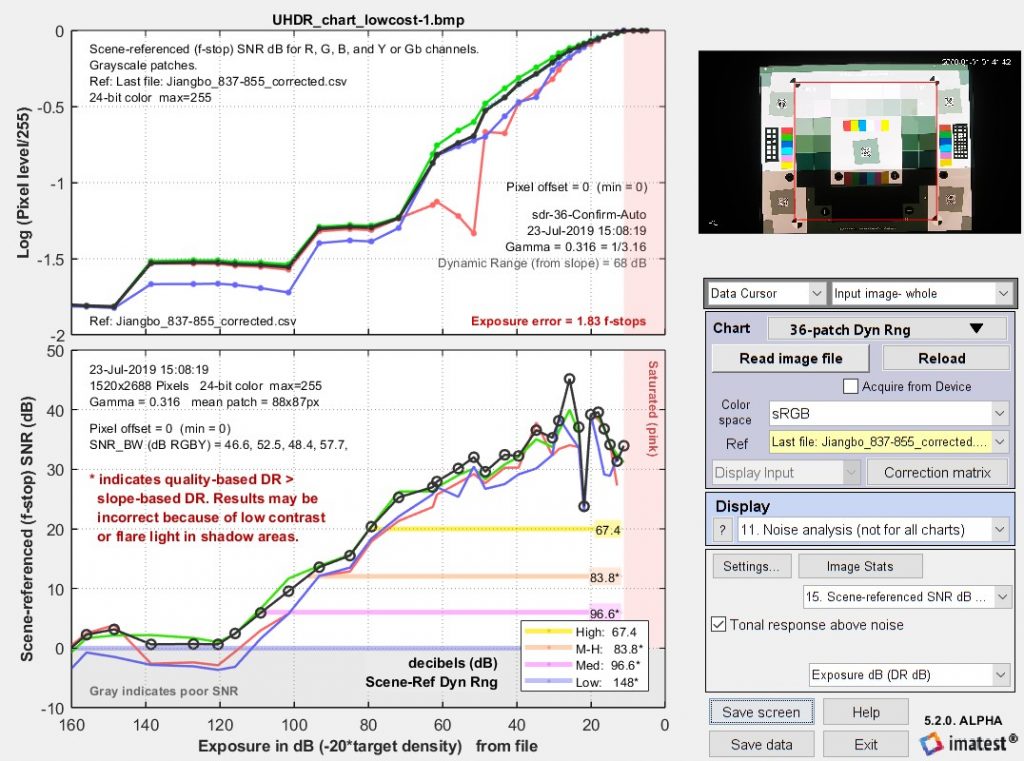 The low-quality (SNR = 0dB, labeled Low ——— ) DR is measured as 148dB—an astonishingly high number; DR from slope is 66dB—much lower than several quality-based DR measurements (and lower than the slope-based DR for the 90-mm T/S lens). Note that the two darkest patches don’t appear on this plot because their densities (8.184 and 8.747) are beyond the 160-dB limit of the plot. (A 160dB is a range of 100 million to 1—more than expected from any sensor or camera. Put another way, if one photon were to reach the darkest patch, the lightest patch would set the chart or sensor on fire).

To understand what is happening, we need to observe the dark portions of the images from high-quality cameras, shown as extra (X-) or XX-lightened to make detail visible in the darker patches, and compare these to a comparable region in the low-cost camera. 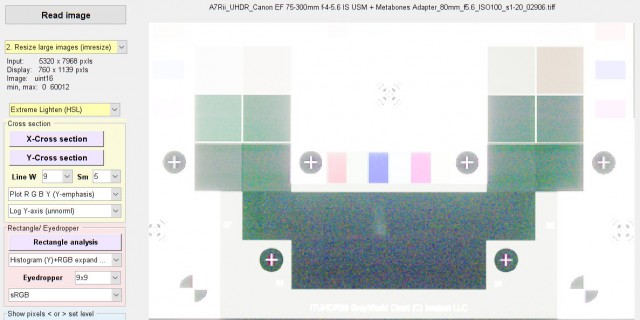 The RAW image for the six-element (5 groups) 90-mm lens shows distinct regions of decreasing brightness in the 7th row (second from the bottom; patches 27-32), and still shows distinct regions in the bottom row, though brightness no longer decreases. A reflection (possibly from the lens) is visible in patch 30. The JPEG image from the 90-mm lens has more noise. Some may be quantization noise since the JPEG has only 256 levels (0-255). The images from the 15-element (10 groups) 75-300-mm lens definitely show more evidence of flare. 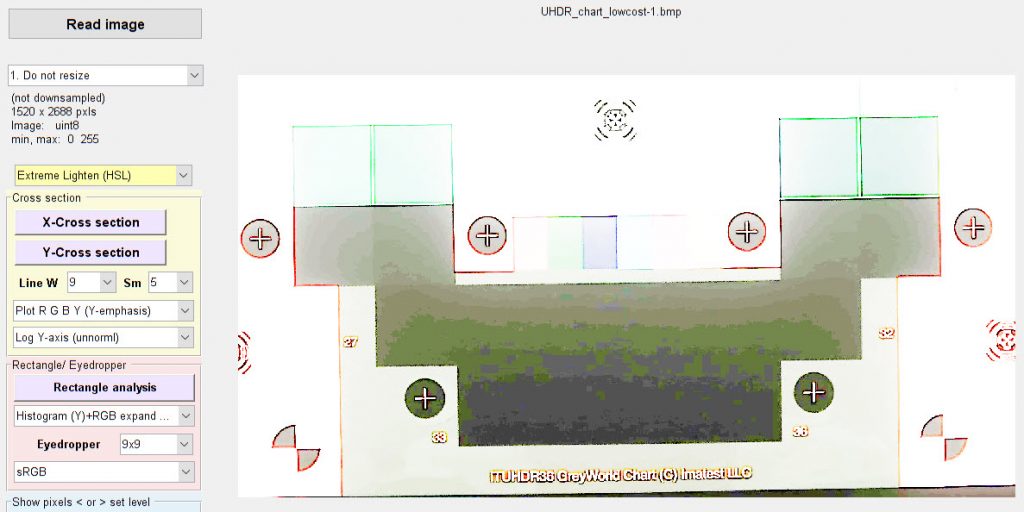 No patch detail is visible in the bottom two rows (patches 27-36). Instead of decreasing from left to right in each row, the pixel level decreases from top to bottom, remaining relatively constant across the bottom two rows, with banding (the result of 255 levels) clearly visible. This is clearly flare light, not signal from the test chart. Unfortunately the SNR in these rows is quite good because Imatest removes the effects of illumination nonuniformity in noise calculations. (A setting can turn this off, but we generally recommend leaving it on to give better results in the presence of actual illumination nonuniformity). But this signal is an artifact, not the real thing.

This leads us to the inescapable conclusion that the quality-based DR results for the low-cost black-box camera are incorrect, and that we need to detect the patches where flare light overwhelms the signal from the chart image and exclude them from the DR calculation.

Fortunately this is not difficult for DR test charts with a circular configuration, such as the 36-patch DR chart illustrated above (harder for linear charts). Because of the patch arrangement, the patch level stops decreasing when flare light dominates the scene. This is clearly visible in the bottom two rows in the above example, where the image gets darker from top to bottom in these rows—perpendicular to the patch sequence. When the patch brightness ceases to decrease, we can be confident that flare light dominates; i.e., we are outside the camera DR. This is the case for patches beyond the slope-based DR.

For this reason it makes sense to limit all quality-based DR measurements to the slope-based DR (maximum).

In Imatest 5.2, the Options II window (accessed from the button at the lower-right of the Imatest main window) offers a choice of whether to limit quality-based DR to slope-based DR. When the box is checked, the limit appears in the results display. 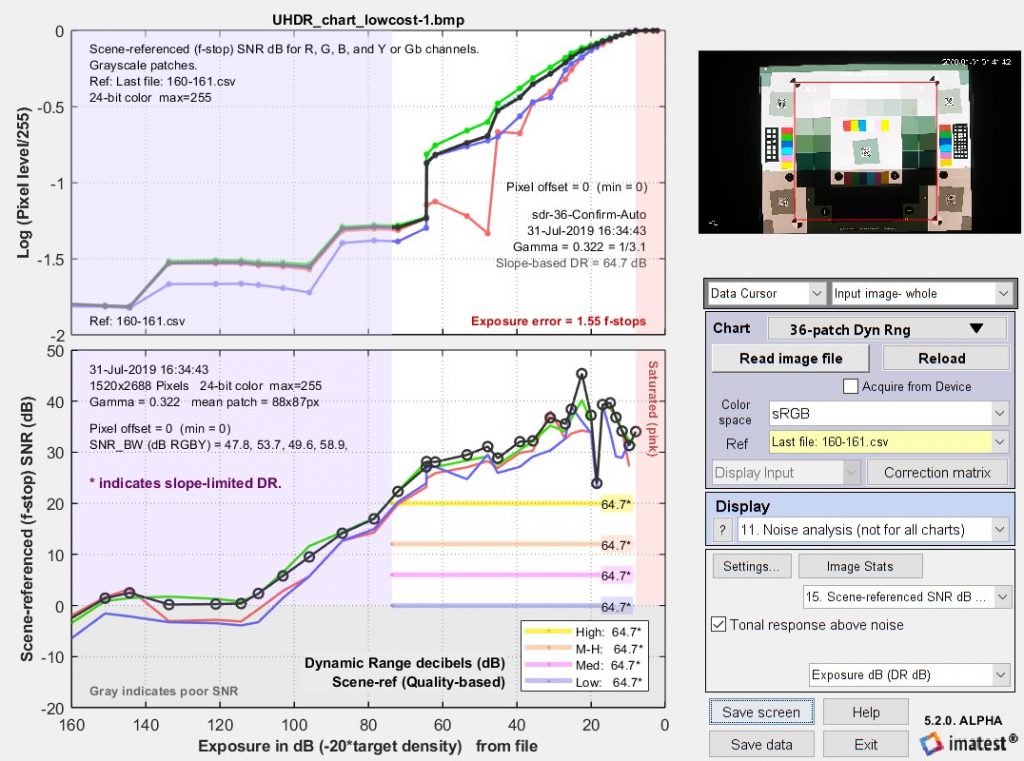 This entry was posted in All Versions, Imaging Tech.