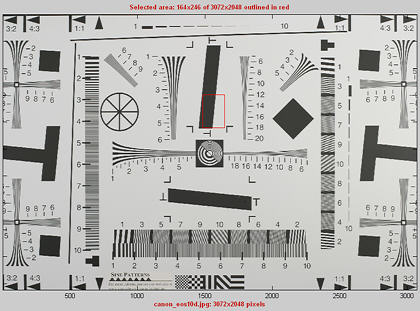 It uses a simple slanted-edge (black-to-white) target described in Sharpness: What is it and how is it measured? Although it doesn't provide the as strong a visual indication of MTF as the test described in Lens testing, it provides a far more accurate quantitative measurement.

Imatest SFR uses a standardized sharpening algorithm to compensate for the different amounts of sharpening in different cameras, allowing them to be fairly compared.

The algorithms for calculating MTF/SFR were adapted from a Matlab program, sfrmat, written by Peter Burns to implement the ISO 12233 standard. The original Matlab code is available on the I3A download page on ISO 12233 Slant Edge Analysis Tool sfrmat 2.0. You can write Peter at

Printing, assembling, and photographing the target

Although Imatest SFR works splendidly with the IMA/ISO 12233 target (available from Sine Patterns; expensive), you can run it with any clean, sharp, straight black-to-white or dark gray-to-white edge. The solid areas need to be smooth and uniform: white on one side and black or dark gray on the other. Since Imatest does not yet sell a printed chart (it's planned), the quickest way to obtain a chart is to download a file and print it on a high quality inkjet printer.

You can download a printable test chart by right-clicking on one of the thumbnails below. (These charts are included in the samples folder of the Imatest installation.) The chart on the left, which has pixel levels 47 and 255, has a contrast ratio of  (255/47)2.2 = 41 when printed at gamma = 2.2 (the normal setting). This is close to the minimum recommended by the ISO 12233 standard. The chart on the right, which has pixel levels 0 and 255, prints with the maximum possible contrast ratio for the printer/paper combination, typically between 80:1 and 100:1. This may result in clipping near the edges in some cameras. For this reason the reduced contrast chart on the left is recommended.

A printable vector-graphics version of the ISO 12233chart is available courtesy of Stephen H. Westin of the Cornell University Computer Graphics Department. If you use it, you should print it as large as possible so edge sharpness is not limited by the printer itself. (There may be some jaggedness in the slanted edges; not a problem with the recommended target.)

The charts are printed straight and physically tilted because the edges print sharper that way. If they were printed at an angle, the printer dot pattern would result in a slight jaggedness. A 5.71 degree angle ( = tan-1(1/10)) is an offset of one part in 10.

I use Velcro to attach the Colorchecker and Q-13 charts to the foam board. That makes them easy to remove. With Velcro, the surface of the Colorchecker is about 1/4 inch (6 mm) in front of the board.

There is no need to remove the inexpensive printed charts, so I mount them on sheets of 1/4 inch foam board using 3M Photo Mount Spray Adhesive (anything similar will do), then I mount the foam board using RTV silicone seal, which can be removed without much damage.

The chart below summarizes lighting considerations. The goal is even, glare-free illumination. Lighting angles around 30 degrees are ideal. Al least two lights (one on each side) is recommended; four is better. Beware of lights behind the camera, which can cause glare. Check before you expose.

Cameras with more pixels, and hence higher potential resolution, should should have a larger image field width. Some gudelines for the minimum field width are,


The above image (taken from the Canon File Viewer Utility) is close to a perfect exposure.

Save the image as a RAW file or maximum quality JPEG. If you are using a RAW converter, convert to JPEG (maximum quality), TIFF (without LZW compression, which is not supported), or PNG. If you are using film, develop and scan it. The file name should be descriptive and should indicate the parameters you are testing. Use dashes and underscores ( - and _ ), but avoid spaces. (Spaces work with Imatest, but they can be troublesome in DOS command lines and web pages.) An example would be Canon_EOS10D_70-200f4L_100mm_f8_ctr.jpg.