Imatest is opened by double-clicking the Imatest icon

After several seconds, the Imatest main window, shown below, opens. Then click on one of the SFR buttons on the upper left. The SFR: Current file button is grayed out (inoperative) for the first run because no file has yet been read. It can be used in succeeding runs to save time when analyzing different regions, though multiple ROI (region of interest) runs are more efficient. 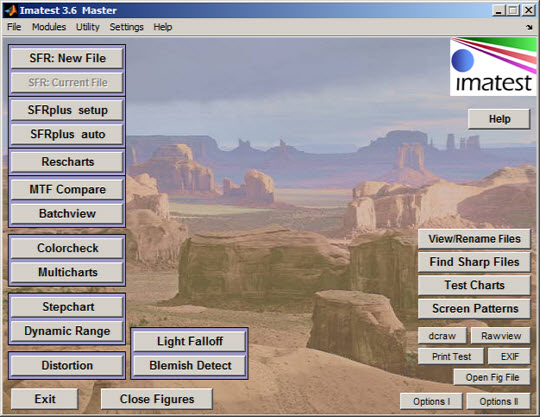 Several cropped slanted-edge JPEG images are included in the images subdirectory of the Imatest directory. Complete ISO12233 charts are not included with Imatest because they are large (usually over 2 megabytes). They can be downloaded from dpreview.com reviews, typically in the last page titled "Compared to...," and from Imaging-resource.com reviews, typically on the page labeled "sample images."

Selecting the ROI (Region of Interest)

If the image has the same pixel dimensions as the last image in the previous run, a dialog box shown below asks you if you want to repeat the same ROIs (regions of interest) as the previous image.

does not work here. Imatest mistakely assumes you are trying to select the entire image. To enlarge the image (to view the crop area more clearly), maximize it by clicking on the square next to the upper right corner of the Window.

The Imatest SFR data window, shown on the right, appears after the Region of Interest (ROI) has been selected, unless Express mode has been chosen. It appears only once during multiple ROI runs. Succeeding runs have the same entries except for Crop location. All input fields are optional. Most of the time you can simply click OK (the button on the lower right) to continue.

Title defaults to the input file name. You may leave it unchanged, replace it, or add descriptive information— as you please.

Plot controls which results are plotted. Plot settings are saved between runs. Only the Cycles per (pixel) and Chromatic Aberration plots are checked by default. The LW/PH plot is unchecked (by default) because it is largely redundant.

Picture Width and Height   defaults to the width and height of the input image in pixels, assuming landscape format, where height < width. If the input image has been cropped, or if it doesn't represent the entire camera image, Picture Height (and Width) should be entered manually.

Gamma is used to linearize the input data (explained below). It defaults to 0.5 = 1/2, which is typical of digital cameras, but is affected by camera (or RAW converter) contrast settings. It may be quite different for scanned film images.

Since SFR sharpness measurements are moderately sensitive to the Gamma setting (a 10% error in gamma results in a 2.5% error in MTF50), it's a good idea to run Colorcheck or Q-13 stepchart to determine the correct value of Gamma.

Crop location is the position of the center of the selected ROI (Region of interest), expressed as the percentage the distance from the image center to the corner. The orientation of the ROI with respect to the image center is included. It is blank if the input image has not been cropped. Crop location can be entered manually. This is only recommended when that image has been cropped outside of Imatest SFR.

Additional parameters (all optional) for Excel .CSV output  EXIF data is entered, if available. These settings are optional but useful when several tests are run for different lenses, focal lengths, apertures, or other settings.

Save settings  If checked, most parameters are retained for additional runs. This is useful when the same camera and lens is tested at a number of apertures and focal lengths. Saved settings are overridden by EXIF data, if it is present. Some settings can change between runs: Description is always reset to the input file name and Picture Height and Width are calculated from the input file. Location is calculated for each Region of Interest (ROI).

When entries are complete, click OK. A Calculating... box appears to let you know that calculations are proceeding. Results appear in individual windows called Figures (Matlab's standard method of displaying plots). Figures can be examined, resized, maximized, and closed at will. Their contents are described in the pages on Imatest SFR results: MTF (Sharpness) plot, Chromatic Aberration, Noise, and Shannon Capacity plot, and Multiple ROI (Region of Interest) plot.

The third file is identical to the Imatest Figure (below), except that the background is white instead of gray.

These results are explained in Sharpness: What is it and how is it measured?

The meaning of the answers is self-evident except for "Yes, Express mode."This button is the same as "Yes," except that the Input dialog box and the two Save dialog boxes (for individual Figures and for the multiple ROI figures at the end) are omitted. Default settings or settings saved from previous runs are used. The clipping warning boxes are suppressed. This speeds up repeated runs; for example, it's very handy when you are testing a lens at several apertures (f/2.8, f/4, f/5.6, etc.).

Imatest SFR creates or updates output files for use with Microsoft Excel. The files are in CSV (comma-separated values) format, and are written to the results directory. CSV files are ASCII text files that look pretty ugly when viewed in a text editor:

But they look pretty decent when entered into Excel.

CSV files can be edited with any of the usual text editors: Notepad, Write (WordPad), etc, but it makes far more sense to edit them in Excel, where columns as well as rows can be moved and/or deleted. Some fields are truncated in the above display, and Date/time is displayed as a sequence of pound signs (#####...).

There are no limits. But I've said enough. ( I'm not an Excel expert! )

Two .CSV files are used as a database for storing data from SFR runs. If possible, data from the current run is appended to these files. A third file for storing MTF data is described below.

When SFR is run, it looks for the two files in the same folder as the slanted-edge input image. If it doesn't find them, it creates them, writes the header lines, then writes a line of data for the run. If it finds them, it appends data for the run to the files. You can rapidly build a spreadsheet by doing repeated runs from files in the same folder. The following table contains the entries. Camera and the entries that follow are all optional. With the exception of Loc, which is calculated when the ROI is manually selected, they are only added if you answer y to the question, Additional data for Excel file?, and enter them manually.