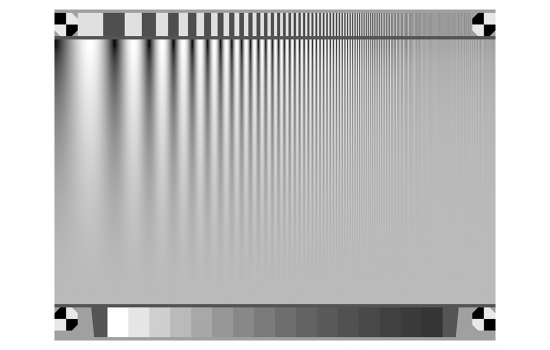 Log F-Contrast (short for Log Frequency-Contrast; not in Imatest Studio) measures the effects of signal processing— noise reduction and sharpening— on imaging system performance using a chart that varies in spatial frequency on the horizontal axis (log frequency increases with x) and in modulation (i.e., contrast) on the vertical axis. Modulation is proportional to (y/h)2 for image height h. Because the Log F-Contrast chart is sinusoidal (rather than a bar pattern) its modulation is equivalent to SFR or MTF.

Log F-Contrast can be run through the Rescharts interface or as a fixed module (capable of analyzing batches of images).

This module is particularly valuable for measuring the loss of fine, low-contrast detail (texture) due to software noise reduction, which can result in a “plastic” appearance in areas where fine texture is missing. This type of nonuniform image processing, which is common in consumer cameras, especially those with tiny pixels (< 2 microns) such as camera phones, is often implemented as a bilateral filter, which can be simulated and analyzed in the Imatest Image Processing module. The chart can be purchased at the Imatest store or created by Test Charts and printed on a high quality inkjet printer. An image of a Log Frequency-Contrast chart, acquired with a Canon EOS-20D camera, is shown below, slightly reduced. The chart design was modified in July 2014 to work with automatic region detection in Imatest 4.0+. 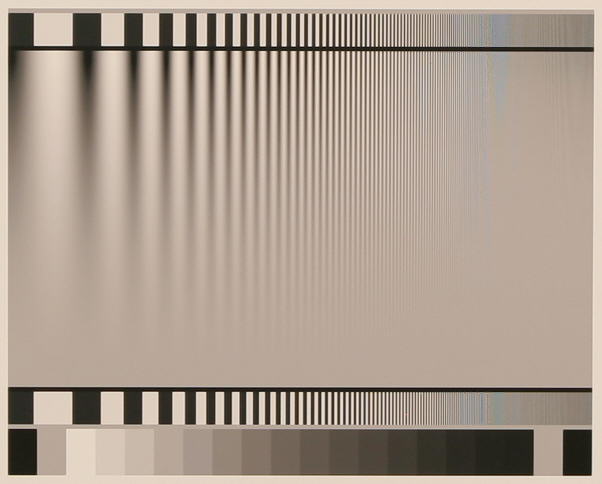 Log F-Contrast divides the chart into twenty-five zones (numbered from top to bottom) for analyzing contrast (MTF), which can be displayed in several ways. Second-order interpolation and smoothing are used to increase the accuracy and readability of the MTF calculations. Spatial frequency is derived from the pattern. 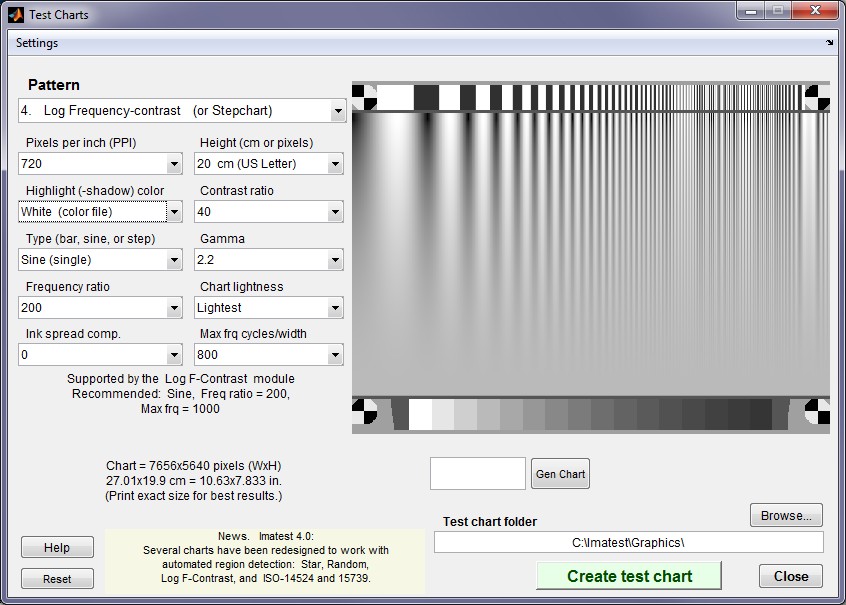 Creating and printing the chart

The Log Frequency-contrast can be purchased from the Imatest Store, downloaded, or printed on a high quality photographic printer from a file created with Imatest Test Charts.

Test Charts has a number of options. The dialog box and recommended settings are shown on the right. The post-July 2014 chart design, which includes registration marks near the corners, is shown. 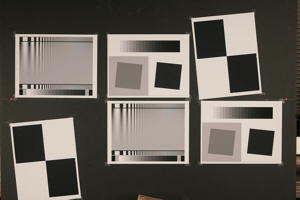 Example: The Log Frequency-contrast chart shown on the right occupies 857 of 3504 horizontal pixels of an original image taken with the Canon EOS-20D. f = 857/3504 = 0.2446. The chart was created with m = 1000 cycles/pixels. The maximum spatial frequency in the chart image is mimage = m/fW = 1.17 cycles/pixel— slightly higher than optimum, but not excessive because the highest frequencies occupy relatively little chart real estate. The chart image spatial frequencies are detected automatically.

When the settings are correct, select the TIFF output file name using the Test chart directory and File name boxes on the lower-right and click Create test chart. Do not print from the preview image. Print the image from the TIFF output file from an image editor or viewer, paying careful attention to the printed image size and color management settings. More details can be found on Test Charts. Examine the printed chart carefully for defects and for image quality, especially at high spatial frequencies. The tones in the 16-step grayscale step chart at the bottom of the test chart should be compared with a standard chart such as the Kodak Q-13/Q-14 with density steps of 0.1. (There may be some divergence in the darkest zones, but zones 1–12 should be very close.) The sine pattern tones will be accurate if the tones match visually.

Photographing the chart and running the program

Mount the chart on a flat dark board— 1/2 inch foam board works well; thinner board warps more easily. Depending on the number of horizontal pixels in the chart to be analyzed, the chart should occupy 1/3 to 1/4 of the horizontal frame. Other charts can be mounted along with it.

Orientation. Although the orientation shown on this page is recommended, the pattern may be rotated by multiples of 90 degrees: it can have portrait as well as landscape orientation.

Photograph the chart using the sort of lighting described in Imatest Lab or How to test lenses, taking care to avoid glare. Save the image in any one of several high quality formats, but beware of JPEGs with high compression (low quality), which will show degraded quality, unless, of course, you are testing JPEG degradations. (Unlike the slanted-edge, the Log f-Contrast pattern reveals JPEG losses quite clearly). RAW images decoded with dcraw tend to produce very different results from in-camera JPEGs.

For fixed (non-interactive; batch capable) analysis: Open Imatest, then click on the Log F-Contrast button in the Imatest main window. Select the file or batch of files to analyze.

Cropping The pattern should be cropped to leave a small margin (about 1/2 – 1% of the image height) at the top and bottom of the pattern, as shown below. The fine adjustment window may be maximized to facilitate fine selection. 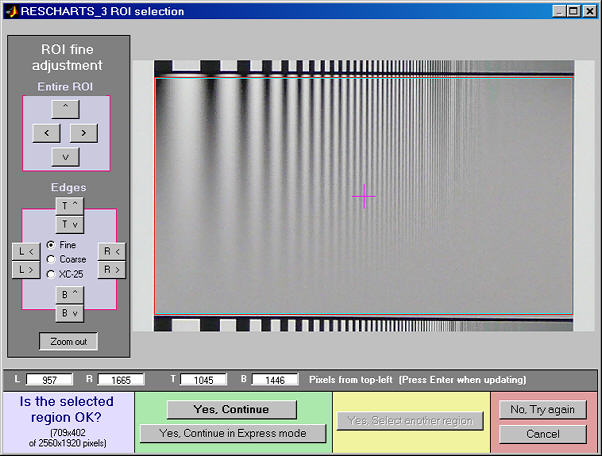 Crop for the Log Frequency-contrast chart. Leave a small margin
(1/2 – 1% of the image height) at the top and bottom. 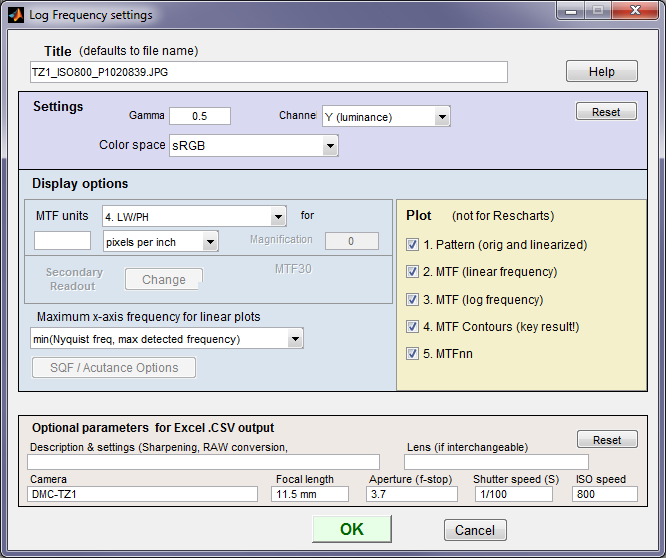 If Yes, Continue (not Express mode) is selected, the settings window shown on the right appears.

Gamma is used to linearize the test chart. It can be measured by Stepchart or Multicharts using the 16-step (0.1 density increment) grayscale below the Log F-C pattern. 0.5 is a typical value for color spaces intended for display at gamma = 2 2 (sRGB, Adobe RGB, etc.).

MTF plots selects the x-axis scaling. If Cycles/inch or Cycles/mm are selected, the pixel spacing (um/pixel, pixels/inch, or pixels/mm) should be entered.

X-axis scaling for linear plots selects the maximum spatial frequency to be displayed.

Plot (not for Rescharts) The five plots in this section are available as output figures. They are referenced as Plot n in fixed module below. EXIF data appears on the right of plots 1, 2, 3, and 5. 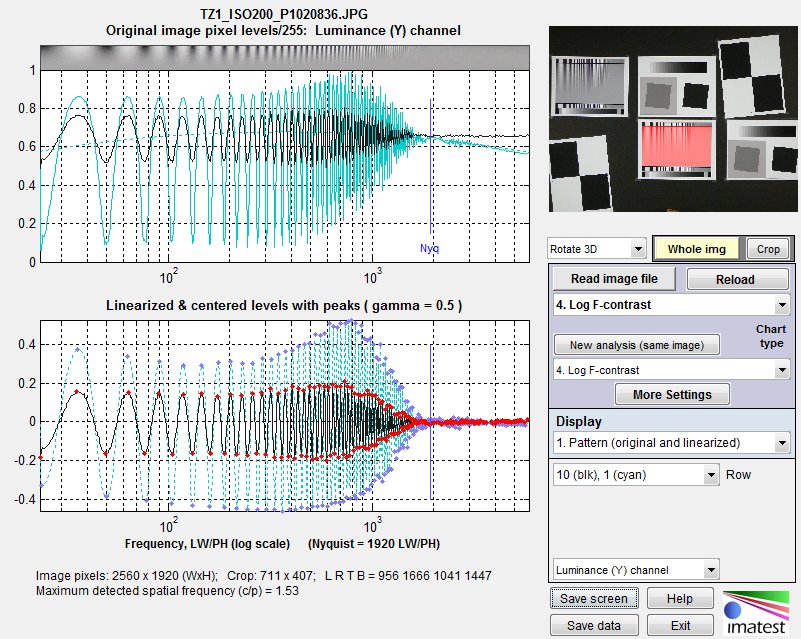 Pattern: original and linearized. Similar to Plot 1 in fixed module

The entire Rescharts window is shown. The upper plot is the normalized pixel level (pixel level/255 for bit depth of 8) of the top of the image (row 1 of 25; where modulation is maximum). The lower plot (linearized using the gamma setting) allows the row to be selected: The cyan plot is the top of the chart (the highest modulation). Note that row 10, which is displayed in black, has much less sharpening (much less of a peak around 0.2 cycles/pixel) than maximum modulation row 1.

This selection produces the most detailed results. It has several options:

Parameter determines which parameter to display. Normalized contrast level is the most generally useful choice.

Style selects the frequency scale and whether to show a color bar to the right of the main display.

Sharpness and Texture Analysis using Log F‑Contrast from Imaging-Resource compares the the effects of sharpening and noise reduction in several cameras using images downloaded from Imaging-Resource.com. using the MTF (normalized) plot. The differences in signal processing are very revealing.
The displays on the right show the Normalized contrast level (MTF normalized to 1 at low spatial frequencies for all chart modulation levels) for the Panasonic TZ1 camera with ISO speed set at 80 (right) and 800 (right, below). Spatial frequency is displayed on a linear scale with a maximum frequency of 0.5 cycles/pixel = 1920 LW/PH (the Nyquist frequency; selectable by pressing More settings ).The image on the right (ISO 80) shows significant sharpening at moderate to high modulation levels: peak normalized modulation is over 1.1 for chart modulation (shown in the scale on the left) greater than 0.18 (about 1.3:1 contrast ratio; shown inside the image, just to the left of the row number). The amount of sharpening decreases very gradually with chart modulation, indicated by the moderately slanted contour lines between 0.9 and 0.1 at modulations over 0.2. 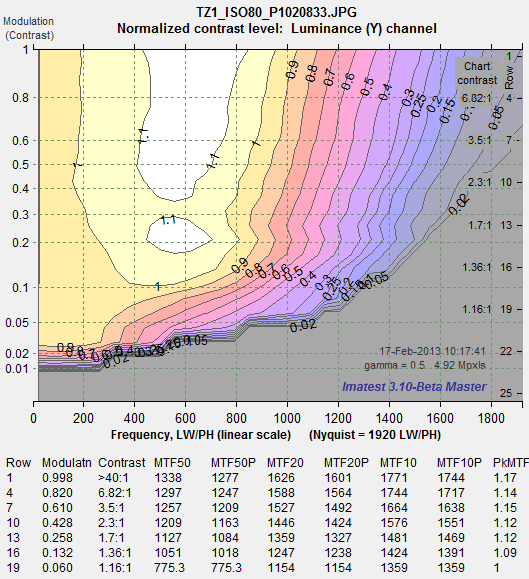 The difference between the two images is striking. At ISO 800 the TZ1 has much less sharpening and more noise reduction— and correspondingly less detail. The amount of sharpening decreases more rapidly with contrast than for the ISO 80 case, as shown by the more slanted contour lines. 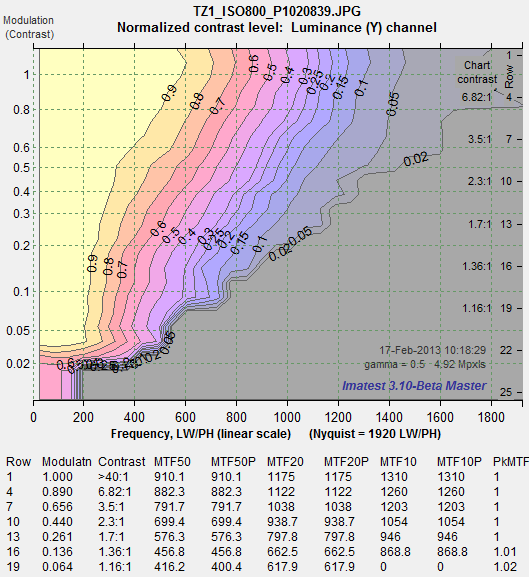 This selection produces a concise summary of results for this module. It has several options:

Second-order interpolation, illustrated below, is used in detecting peaks at spatial frequencies between 0.06 and 0.5 cycles/pixel It increases the peak amplitude for detected peaks between sampling points.. At lower frequencies it does little to improve accuracy because the signal varies slowly. It also has no benefit above the Nyquist frequency (0,5 cycles/pixel), where the signal consists of noise and aliasing. The red dots in the illustration show the peak amplitudes corrected with second order interpolation (with uncorrected peak locations).

Smoothing  The MTF & Moiré displays contain two curves: unsmoothed (thin dashed lines) and smoothed (thick solid lines). The smoothed curves are emphasized because the roughness in the unsmoothed curves is entirely an artifact of the calculations, resulting from sampling phase and noise— irregularities can result from noise on a single peak. Irregularities are reduced, but not eliminated, by second-order interpolation. It is important to realize that the features of the unsmoothed curve have no physical meaning.

Frequency display  Let x1 and x2 be the left and right x-axis limits and let f1 and f2 be the minimum and maximum display frequencies. Then,

Frequencies are detected automatically in Log F-Contrast. The frequency ratio (f2 / f1) is specified when creating the chart in Test Charts.