SFRplus is one of several Imatest modules that measures distortion and Field of View (FOV). Distortion: Methods and Modules has a detailed comparison of their capabilities. A key attribute of SFRplus is that it gives correct distortion and field of view measurements with pre-distorted charts, which enable measurements to be made close to the edges of the image with strongly barrel-distorted (fisheye) lenses.

The Imatest SFRplus module can handle moderately distorted images but it fails for extremely barrel-distorted images. (We’ve never seen an extremely pincushion-distorted image.) To handle this we provide charts that are distorted inversely to lens distortion, i.e., that have pincushion distortion. For testing a fisheye lens you should select a chart that has the approximate inverse of the lens distortion; it doesn’t have to be exact. When the correct chart is chosen the chart image will have low enough distortion to be properly analyzed. Although SFRplus can analyze images with large amounts of distortion, many currently-available lenses, some with fields of view of 180 degrees or more (not uncommon in the automotive industry), can only be analyzed with SFRreg.

The Imatest store offers several pre-distorted SFRplus charts that enable SFRplus to work with highly barrel-distorted (fisheye) lenses. These charts can be purchased from the Imatest store or printed from SVG files created with the Imatest Test Charts module (though we only recommend printing your own chart if you have a photographic-quality wide-body printer, a knowledge of color management, and skill in operating the printer). Here is an example of Test Charts settings for a pre-distorted chart. 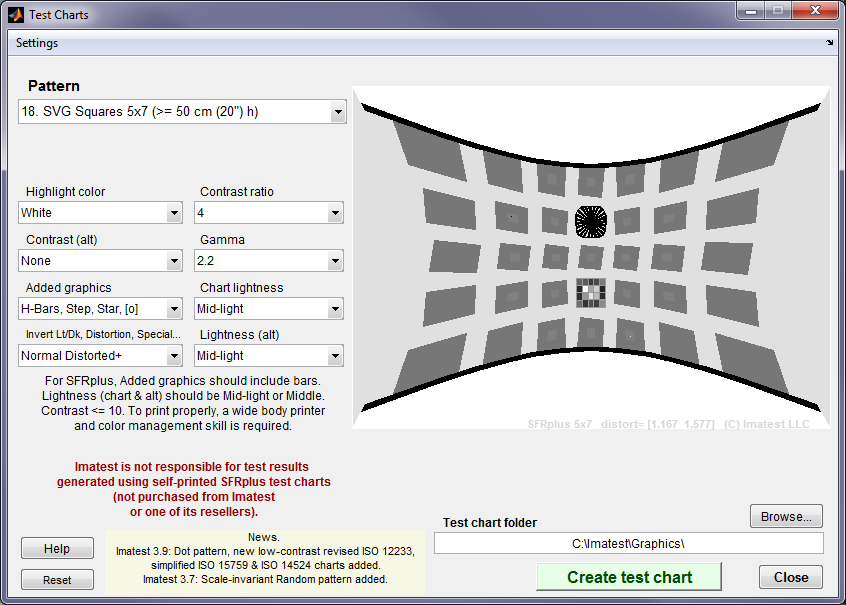 Note the two distortion parameters at the lower-right of the image: [1.167 1.577]. These must be entered in the More settings window for SFRplus analysis to obtain correct distortion and Field of View (FoV) measurements.

SFRplus settings that affect distortion and Field of View calculations

Bar-to-bar Chart height cm. Must be entered to calculate the Field of View in cm.

Lens-to-chart distance cm. Must be entered along with Bar-to-bar chart height to calculate angular Field of View in degrees.

Distortion parameters You should enter the numbers printed in light gray (to not interfere with bar detection) on the lower-right of the chart. Typical values are [0.8333 1.123] for the standard pre-distorted chart and [1.167 1.577] for the extra pre-distorted chart. Use the default values of [0 0] for undistorted charts. Charts with custom distortion (selected by clicking Normal custom distort in the Invert Lt/Dk, Distortion, Special… dropdown menu) have different values.

Distortion calculation selects the equation to use for calculating SMIA TV distortion (a summary metric) and Field of View, both of which involve extrapolating distortion beyond the bars. The fourth selection, Use best of above, is generally recommended.

Algorithm: The optimizer for calculating the distortion coefficients (k1 for 3rd order; h1 and h2 for 5th order; p1 for arctan/tan) is run for each equation. It works by finding the straightest top and bottom bars and the most even distances between the left edges and right edges of the squares in the center row of the SFRplus chart. The optimizer returns a residual error— the square root of the sum of the squares of the errors. This number is a reliable, robust indicator of how well the optimizer worked. When Use best of above is selected for the distortion calculation, the calculation with the lowest residual error is selected. This choice is strongly recommended because it is not always possible to predict which equation will give the best solution (though it’s occasionally obvious– 5th order works best for visible “mustache” or “wave” distortion). 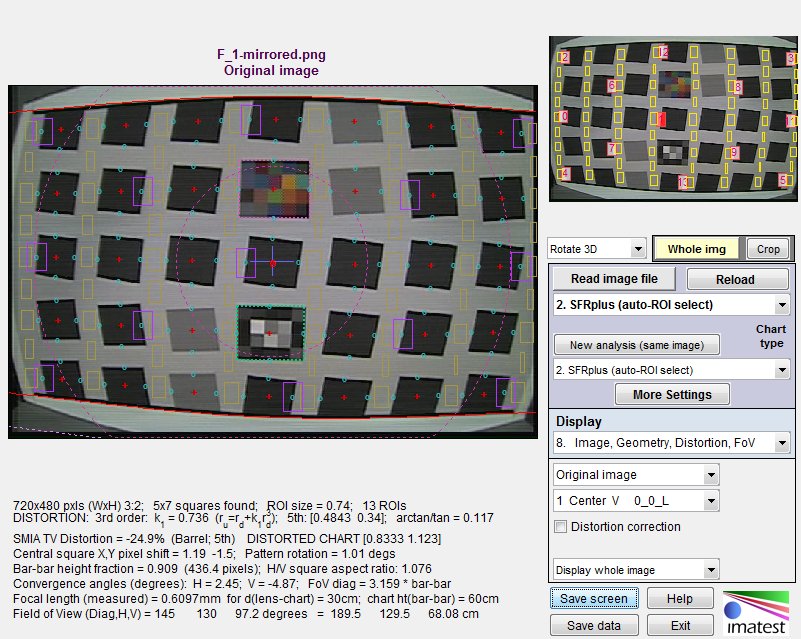 The three sets of distortion coefficients (3rd order, 5th order, and arctan/tan) are shown in the second line below the image.

SMIA* TV Distortion (barrel or pincushion), the selected equation (5th order in the above image) and the Distortion parameters (for non-zero values— pre-distorted charts-only) are shown in the third line. If Use best of above was selected in the Distortion calculation dropdown menu, the actual selected calculation is shown. [*SMIA is the now-defunct “Standard for Mobile Imaging Architecture”, started by Nokia and STMicroelectronics in 2004.]

However the traditional TV distortion is likely to be included in an upcoming ISO standard. When this happens we’ll offer a choice (a checkbox). 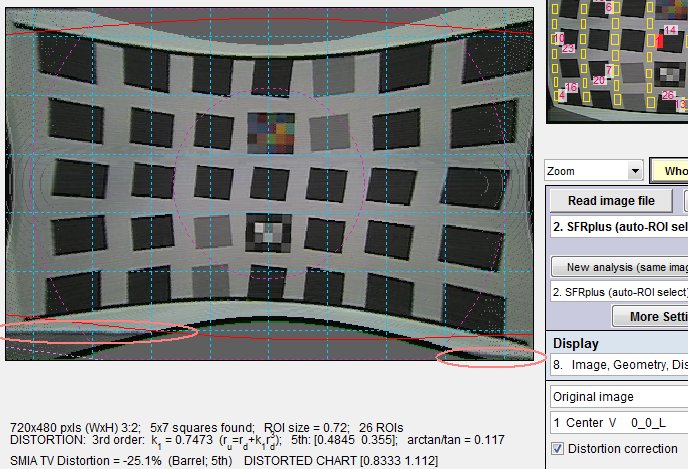 Distortion correction checked, Distortion parameters kept for the standard pre-distorted chart.
The chart edges (shown inside the red ellipses at the bottom) have been straightened. 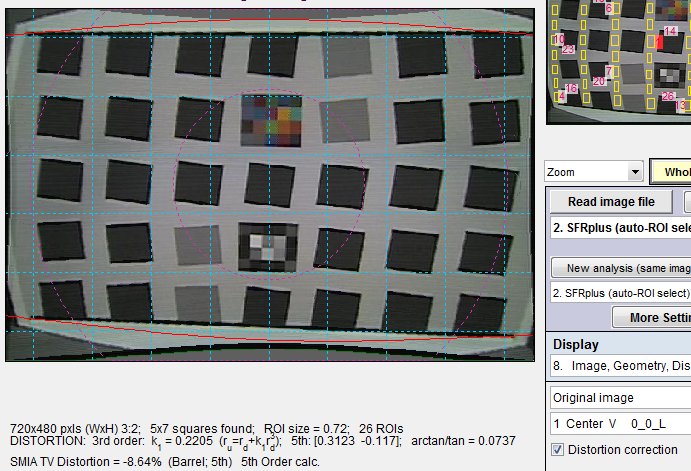 Distortion correction checked, Distortion parameters set to 0.
The top and bottom bars have been straightened. 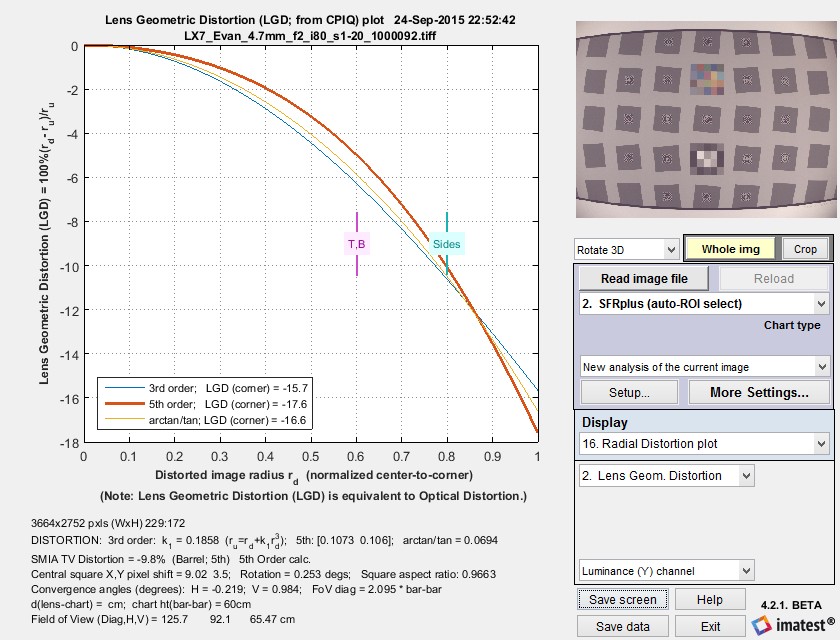 The bold solid lines show Δr or LGD for correction formulas: ru = rd + k1 rd3 (3rd order; blue); ru = rd + h1 rd3 + h2 rd5 (5th order; green); or the arctan/tan equations (red). With these equations |Δr| often increases as a function of r(distorted), i.e., it tends to be largest near the image corners. The selected value (or the one with the least error, err) is shown in boldface.

Comparison with other modules—  Distortion: Methods and Modules contains a detailed comparison of SFRplus distortion results with Distortion, Dot Pattern, and Checkerboard.