Batchview is a postprocessor for displaying lens test results generated by SFR, SFRplus, eSFR ISO, or Checkerboard batch runs (analyses of groups of test chart images taken at various apertures, focal lengths, etc.). It can store and display up to four sets of results for convenient comparisons in Imatest Master; two in Studio.

Typical use: You’ve tested a lens at a range of apertures (for example, f/2.8, f/4, f/5.6, f/8, f/11, and f/16) at several focal lengths with SFR or SFRplus. To get a good feeling for its performance, you’ve measured its sharpness (MTF) at the center, corners, and part-way to the corners (ideally, selecting 9 regions in SFR; 13 or more in SFRplus). That’s a whole lot of data– at least 54 MTF curves for each focal length. You want to see a nice, concise summary.

The image below shows MTF50 in Line Widths per Picture Height (LW/PH)— a good measure of total image sharpness)— of four sets of tests (batches of runs). 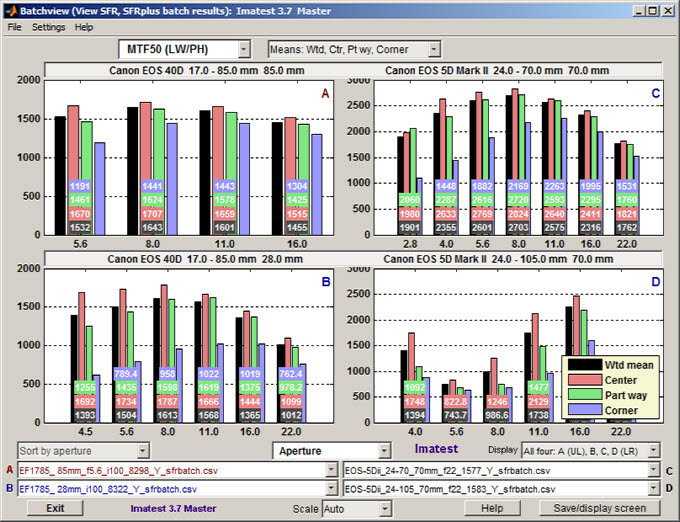 Batchview display from four sets of tests on different cameras and lenses
Note that the legend (Plot D; lower right) can be moved to uncover the numbers (LW/PH results).

The black, red, green, and blue bars are the weighted mean, the mean of the center region, the mean part-way out, and the mean of the corners, respectively. Numeric values displayed near the base of the bars are optional(they can be turned of in the Settings dropdown menu if desired).

If a single Display is chosen (selected in the Display box on the right, just below the plots), more detail is displayed. 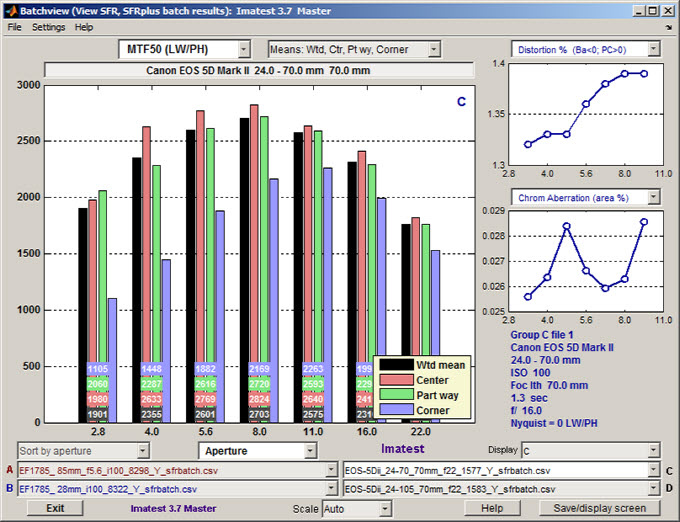 Batchview display from one set of tests

Two small plots (SMIA TV Distortion and Chromatic aberration area in %) and some EXIF data (metadata) from the first file in the batch are displayed on the right.

The first step is to acquire one or more batches of test chart images— sequences of images in which one parameter is varied (most often aperture, i.e., f-stop, but focal length, ISO speed, etc., can also be varied), usually with most other parameters fixed. (Of course if aperture is varied, exposure time must also be varied to keep exposure constant.) You can use one of the composite charts illustrated in The Imatest Test Lab, but the most convenient and consistent results are obtained with the SFRplus, eSFR ISO, or Checkerboard charts. An SFRplus chart is shownbelow inside the in Rescharts SFRplus setup window, which should be run to save settings prior to doing a batch run for several files in SFRplus Auto (the batch-capable, non-interactive version of SFRplus). 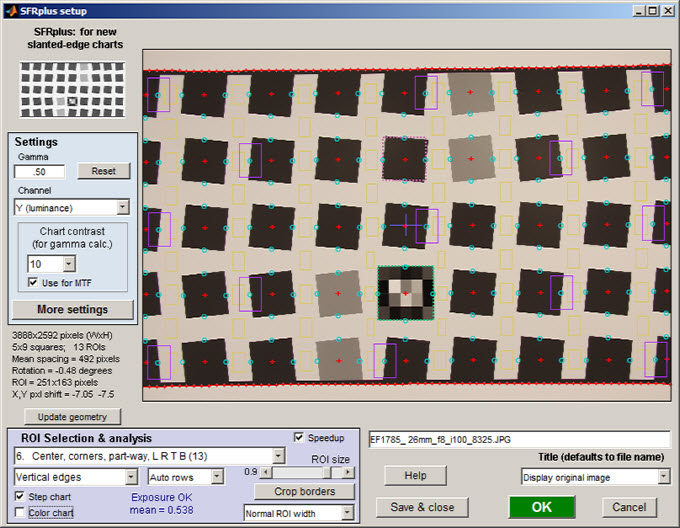 SFRplus: The following settings are recommended when you run SFRplus in Rescharts. (Full instructions for running Rescharts can be found here).

Run the batch of images — Press SFRplus auto , eSFR ISO auto , or Checkerboard auto  in the Imatest main window and select the batch of files to analyze. A maximum batch size of eight is allowed in Imatest Studio. 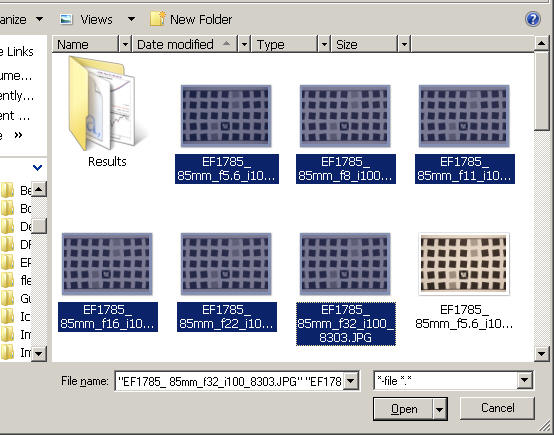 Use the Rename files module to change the meaningless names generated by the camera to more meaningful names that contain key EXIF data such as the aperture, focal length, etc. The file names in the above illustration were processed through Rename files.

SFR can also be used to generate input for Batchview, especially with targets that contain slanted-edges near the center, part-way out, and near the corners, but the slanted-edge modules with auto ROI detection — SFRplus, eSFR ISO, or Checkerboard — are strongly preferred. Instructions for running SFR with this chart can be found in Using SFR Part 2. The sections on Repeated runs, Multiple ROI fine adjustment, and Automatic ROI refinement contain some helpful tips.

To run Batchview, click the Batchview button in the Imatest main window. Initially, a blank screen will appear. In succeeding runs, saved file names will be read in, and a display will appear on the screen.

Enter the batch summary file(s), whose names have the form rootname_chan_sfrbatch.csv, into one of more of the file name windows (A, B, C, or D) at the bottom of the Batchview window. Rootname is typically the root name of the first file in the batch (the file name omitting the extension). Chan is the channel: Y (luminance), R, G, or B. Starting with Imatest 22.1, the same …_sfrbatch.json file used for FocusField can be entered.

When files have been entered into the file name window(s) corresponding to the Display menu (lower right), the results will appear. Here is an example showing results for A and B in Imatest Studio.

Batchview results with two displays (Imatest Studio)
The plots are displayed side-by-side if you click Settings and uncheck 2 plots on top, bottom.

A large number of display options are available.

X-axis (independent variable; in the center below the plots)

Sets the independent (X) axis. All except numbers are derived from EXIF data. If EXIF data is not available, the numbers can be added by editing the sfrbatch.csv file in Excel of Open Office.

Sort order (Left, below the plots)

The X-axis order of plots usually needs to be specified (the default order determined by Windows rarely makes sense). The settings are Standard order, Reverse order (these two from Windows), Sort by aperture, Sort by shutter speed, Sort by Exposure Index, Sort by focal length, Sort by camera, and Sort by image file name. For most of the examples on this page, Sort by aperture has been selected.

Although Automatic scaling is the default, manual scaling can be specified so that all plots have the same y-axis scale. Scaling is selected in the small Scale dropdown menu at the bottom-center, which is set to Auto by default. If you select Enter, a small window appears to the right that allows you to enter the maximum y-value for manual scaling. For example, selecting 3000 sets the maximum y-value of all graphs. You can switch back to Auto whenever you want.

Display variable (dependent variable; left of center above the plots)

This key setting determines what is displayed. The most common choice is MTF50 in Line Widths per Picture Height.

This selects the regions represented by the bars in the plot. The first, which selects a weighted mean of the regions (100% for the center region, 75% for the part-way region, 25% for the corner region) and each of the three regions is the most common selection.

Region locations are shown below. 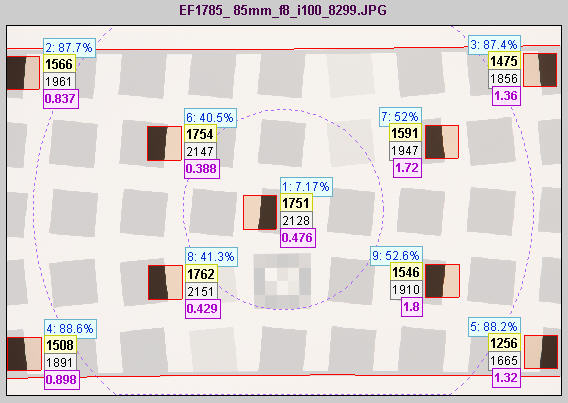 When a single plot is selected, two small additional plots appear on the right. This enables you to present a rather complete set of results, for example (as shown above), sharpness on the main (large) plot, distortion in the upper-right plot, and chromatic aberration in the middle-right plot. The following parameters are available for the small right plots.