Direct image acquisition allows images to be captured directly from a variety of devices without first being stored as files. It has several important applications.

Although it has been a feature of Imatest since at least version 3.6, the popularity of this feature shot up with the release of Imatest 2020.2. Direct Data Acquisition now allows realtime focusing (at refresh rates greater than 10 reloads/second, depending on image size and interface). This was a game-changer for applications that require realtime analysis.

Although the majority of images traditionally analyzed by Imatest have been from files (JPG, PNG, etc.), three modules, which can perform a majority of Imatest’s analyses, support direct image acquisition.

When Auto reload is selected, direct data acquisition works as shown in the illustration below. 1. Acquire the image. 2. Analyze. 3 Display. Then repeat until Stop reload is pressed.

Demonstration of the new realtime focusing capability of Imatest 2020.2.

Improvements made after this video was produced have increased reload speed by about 50%.

To directly acquire images that can be updated in realtime,

The following image shows the Edge/MTF display with Settings that affect direct acquisition. 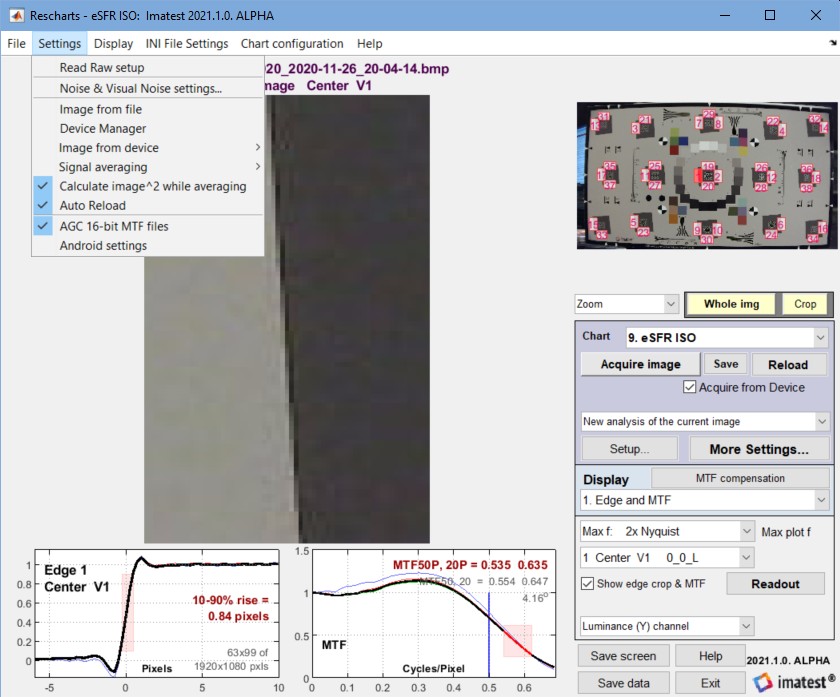 While all measurements in Imatest 2020.2 have been sped up by a factor of 4 to 10 or more compared with 2020.1, focusing is the most important and most speed critical function. If it’s done at all, it needs to be fast. 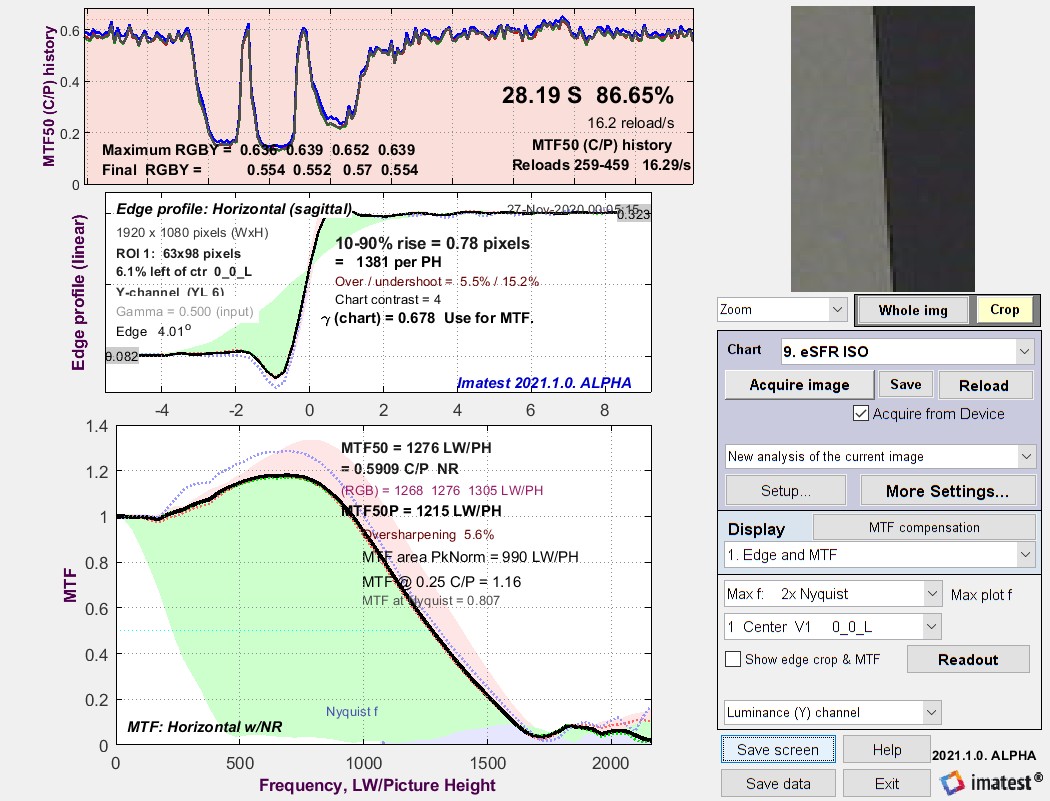 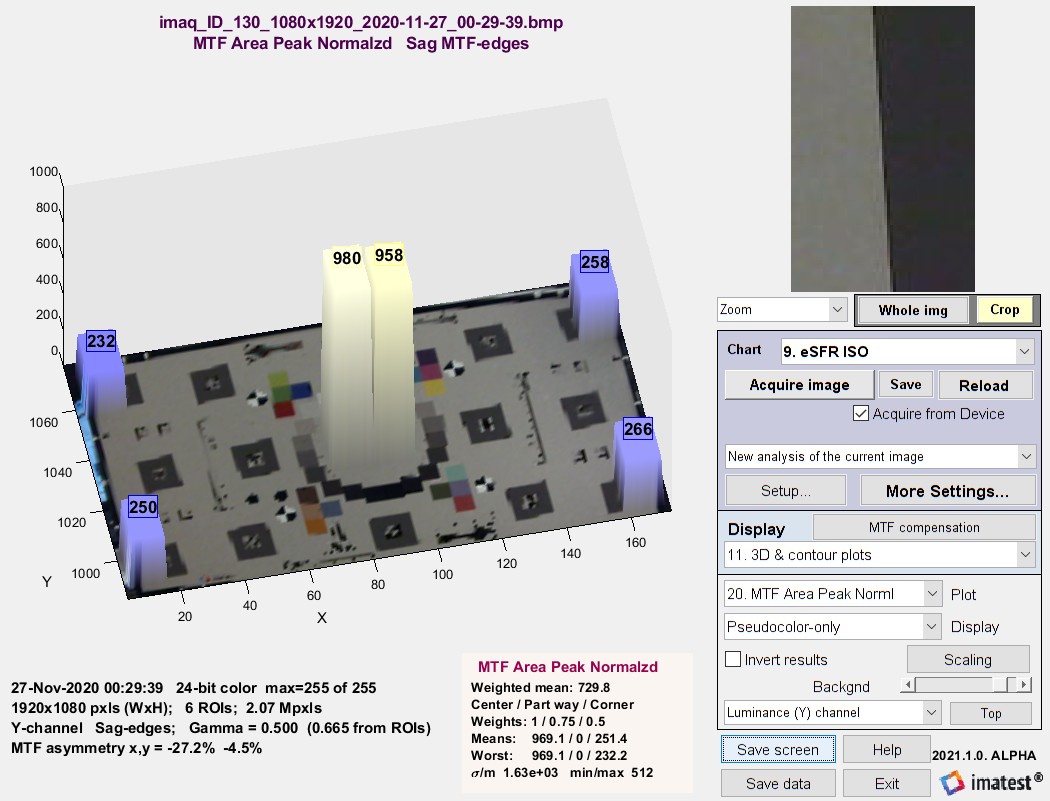 Available in 2021.1, upgraded from Focus Score in earlier versions. Focus Score Plus calculates more than sharpness, and can be used for Auto White Balance/Auto Exposure/Autofocus (AWB/AE/AF) calculations. Focus score can calculate focus for any object with well-defined edges. It is extremely fast (though only about 20% faster than single slanted-edge calculations). It is excellent for rapid focusing, but numerical results are not standard and cannot be used to compare different images, imaging systems, etc. 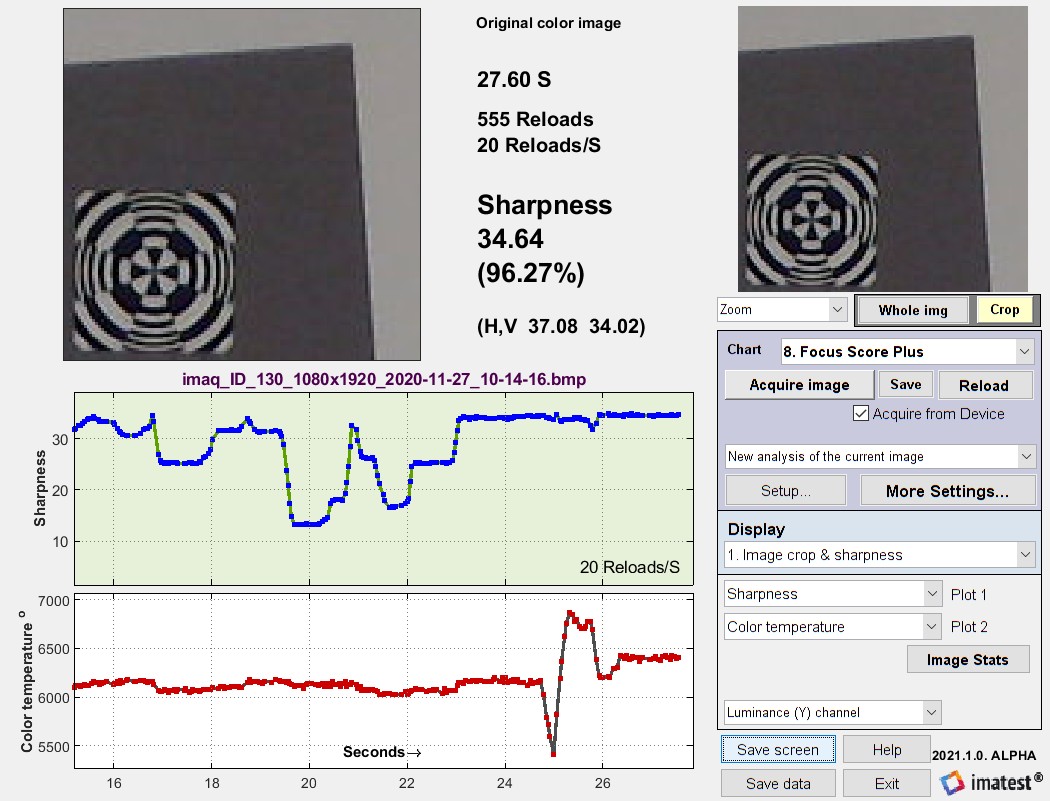 Other test patterns are slower than slanted-edges, but the Siemens Star and Wedge are still usable for focusing.

Signal averaging is a technique that combines multiple images to improve Signal-to-Noise Ratio (SNR) and reduce or remove the effects of noise from measurements. It is a key component of spatial nonuniformity calculations — PRNU (Photo Response Nonuniformity) and DSNU (Dark Signal Nonuniformity), which work best with 100 or more combined images. Averaging a large number of images stored in files can be very cumbersome. It is extremely fast and convenient with direct image acquisition. 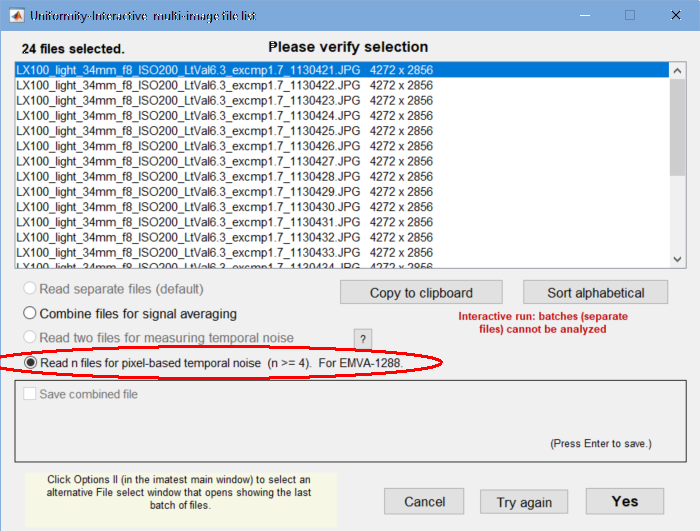 Signal averaging is especially valuable with modules designed to analyze image processing:  Random/Spilled Coins and Log Frequency-Contrast, both of which analyze system behavior at low contrast levels where noise is difficult to distinguish from the image signal.

To average signals from a batch of files, read the batch using the usual techniques, then check the appropriate box in the multi-image file list window, shown on the right for Uniformity Statistics (PRNU and DSNU) calculations.

We had hoped to show before/after images, but the cameras we are using for direct image acquisition have large amounts of software noise reduction built-in, so there wasn’t much difference. Here is a result from Log Frequency Contrast result for 128 averages. We plan to improve the annotation, since the averaging operation is less obvious than it should be — indicators are circled in red. 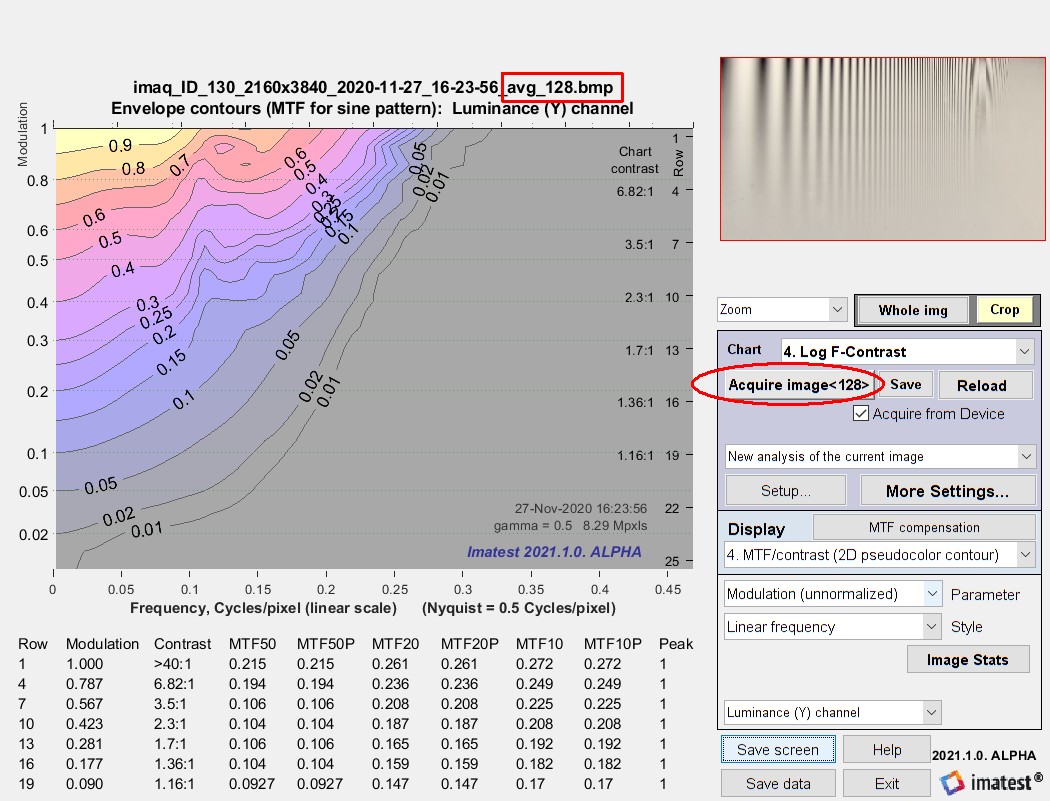 Log F-Contrast results for 128 averages from our USB camera