This document illustrates eSFR ISO results. Part 1 introduced eSFR ISO and explained how to obtain and photograph the chart. Part 2 showed how to run eSFR ISO inside Rescharts and how to save settings for automated runs. 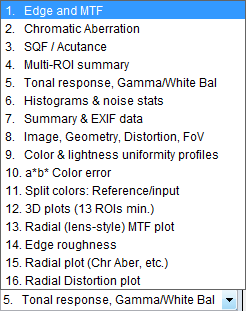 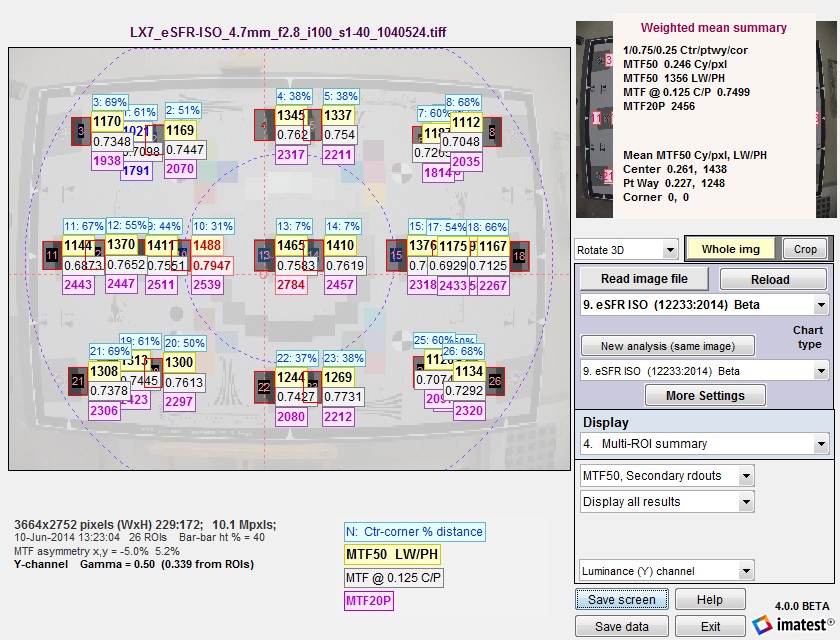 Distortion statistics, shown in the lower left, are described in detail in SFRplus Distortion and Field of View Measurements.

MTF asymmetry  is calculated in the x (horizontal) and y (vertical) directions. MTF50 as functions of x and y are fitted to second-order (parabolic) curves, which are used to calculate expected MTF50 values at the Top, Bottom, Left and Right (MTF50T, etc.) of the image.

Weighted summary results are displayed on the upper-right. The default weights are 1.0 for ROIs in the central region (inside the inner dotted circle), 0.75 for the middle region (between the two dotted circles), and 0.5 for the outer region (outside the outer dotted circle). These weights can be changed in the eSFR ISO Settings window. The results are independent of the number of ROIs in each region. 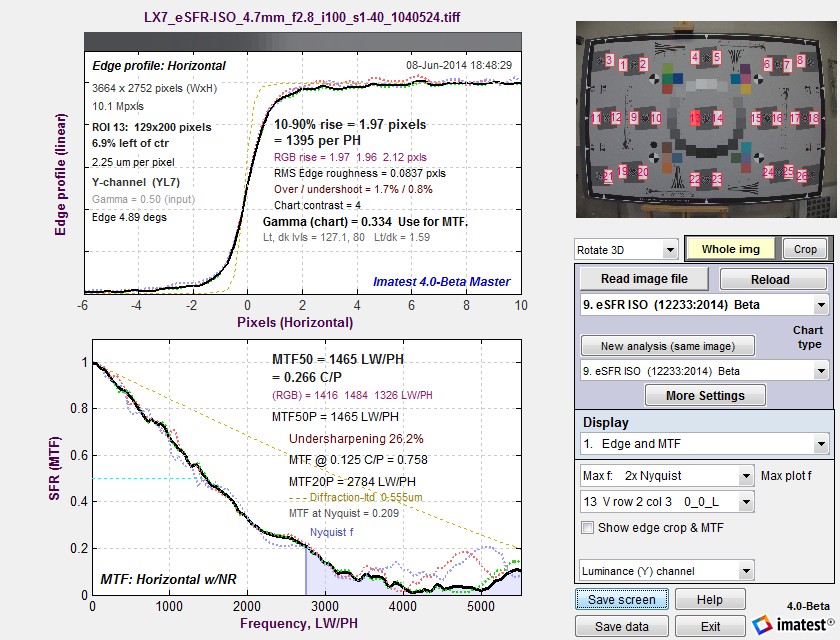 There are a number of readouts, including 10-90% rise distance, MTF50, MTF50P (the spatial frequency where MTF is 50% of the peak value, differing from MTF50 only for oversharpened pulses), the secondary readouts (MTF30 and MTF@30 lp/mm in this case), and the MTF at the Nyquist frequency (0.5 cycles/pixel). The diffraction-limited MTF curve is displayed as a pale brown dotted line. 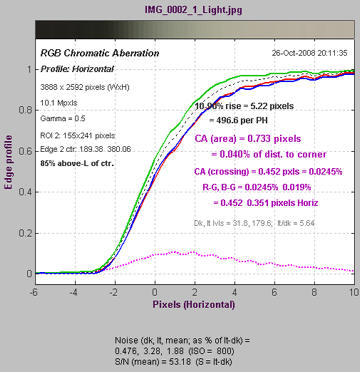 Lateral Chromatic Aberration (LCA), also known as “color
fringing,”
is most visible on tangential boundaries near the edges of the image. Much of the plot is grayed out if the selected region (ROI) is too close to the center (less than 30% of the distance to the corner) to accurately measure CA.

Information for correction LCA (R-G and B-G crossing distances) is also given in units of % (center-to-corner) and pixels. LCA can be corrected most effectively before demosaicing. Results are explained in Chromatic Aberration … plot. 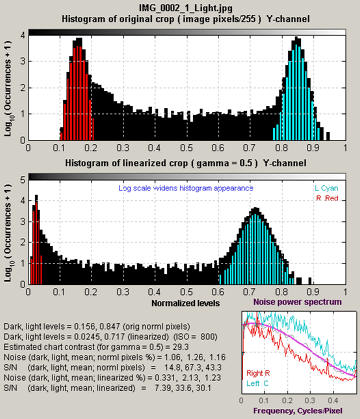 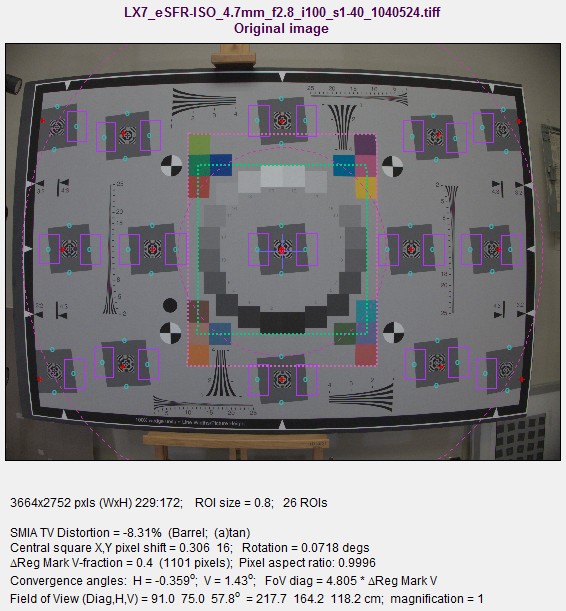 This display allows several aspects of the image to be viewed in detail. It shows the selected regions for MTF/noise analysis (violet rectangles), the yellow rectangles used for generating the uniformity profiles, and the red horizontal curves used to measure distortion). Display options include

Perfect alignment would be x,y coordinates, rotation, and H,V convergence = 0. Vertical and Horizontal convergence angles are calculated from the registration marks, extrapolated to the image edges. With fisheye (strongly barrel-distorted) lenses the chart must be precisely centered for the convergence angle measurement to be meaningful. 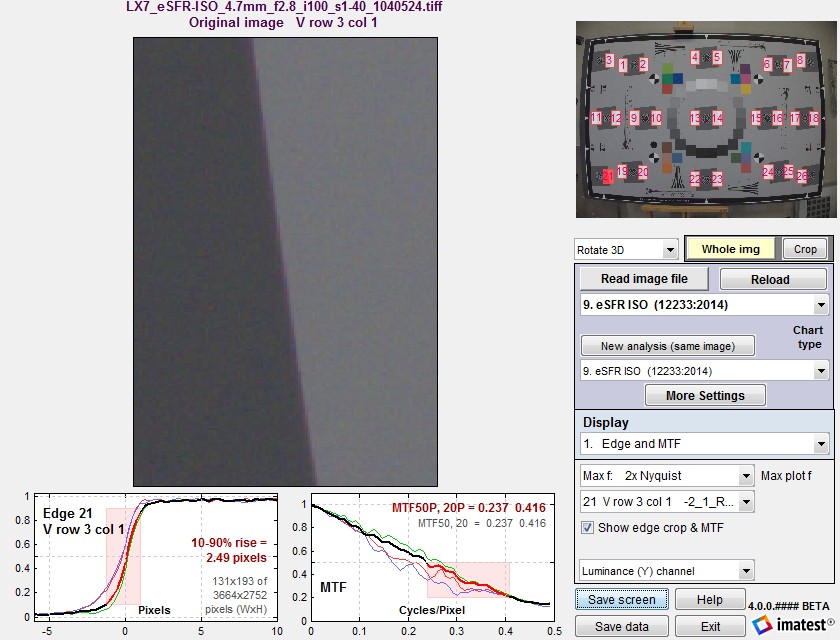 Image, Geometry, Distortion, FoV display, showing Crop to ROI, which allows
the edge appearance (enlarged) to be compared to Edge and MTF results.

Produces results similar to the MTF plots in the Canon (explanation), Nikon (explanation), and Zeiss websites. Up to three plot parameters may be selected with the Secondary readout. Typical choices are MTF at 10, 20, and 40 lp/mm (used by Zeiss) or 10 and 30 lp/mm (used by Canon and Nikon). Pixel spacing (um/pixel, etc.) must entered to obtain lp/mm spatial frequencies.

A minimum of 13 regions is recommended, though more are better. 15. Ctrs, all is the recommended region setting. 13. Ctrs, all outer or 14. Ctrs, all inner also work. This plot is only recommended for enhanced or extended charts. V&H edges (both) should be selected.

Though these plots are similar to the website plots, there are several significant differences.

The Multi-Wedge plot shows a summary of results for all wedges. It is the exact counterpart of the Multi-ROI (edge) summary plot, illustrated above. 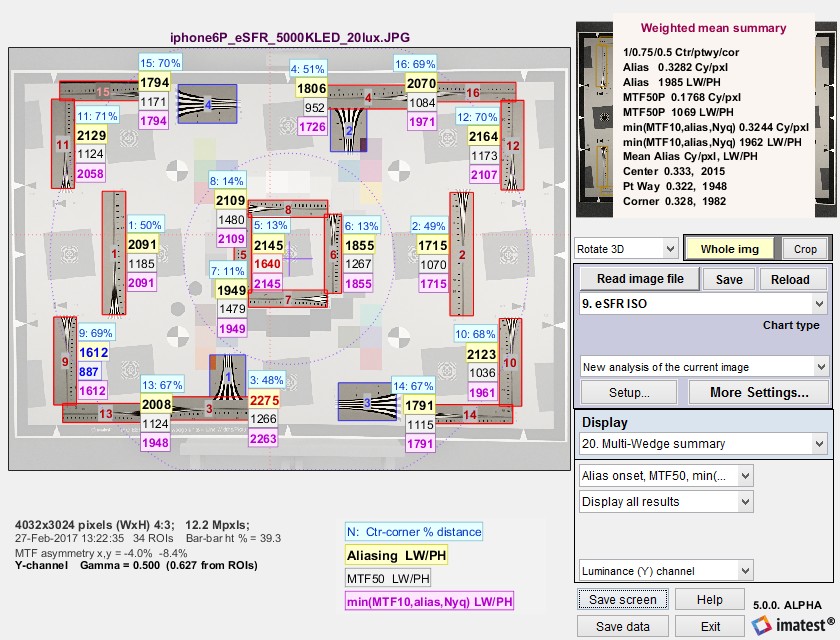 How to Read MTF Curves by H. H. Nasse of Carl Zeiss. Excellent, thorough introduction. 33 pages long; requires patience. Has a lot of detail on the MTF curves similar to the Lens-style MTF curve in SFRplus and eSFR ISO. Even more detail in Part II. Their (optical) MTF Tester K8 is of some interest.