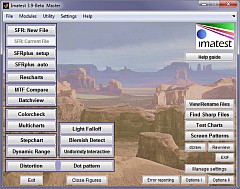 Imatest’s standard interface is a versatile and powerful tool for interacting with its many modules, but it can be complex and intimidating, especially for lab technicians or personnel with limited training in Imatest’s many capabilities.

Also, there is always a chance that one or more settings may be different from the expected values. Imatest settings are stored in imatest.ini and updated whenever modules are run. They can be saved to a named file or loaded or merged from a named file. This gives users strong control the settings, but it can still be challenging to obtain the correct settings for production or lab environments— very important since erroneous settings can have unpredictable effects on test results.

These issues have been solved with the Imatest Functional Interface (introduced in Imatest 3.9)— a simple but highly-customizable alternative to the standard Imatest interface that ensures that the correct settings will always be used.

The functional interface is of special interest to anyone who needs to run
a large number of tests with consistent settings.

You can always return to the standard Imatest interface (main window) when the need arises.

The editor is opened by clicking Edit button or the popup menu just to its right, on the lower-left of the Functional Interface. (If this menu is not displayed, click Settings, Show edit menu.)

Functional Editor window (for Button 1 of the Functional Interface)

Global settings: These affect all the buttons.

Description: This is the text that appears on the button (1 in the above example). It should be clearly descriptive.

Tooltip string: This is the text that appears in a box when the mouse hovers above the button. Enter additional detail and instructions here, if needed.

Named ini file to merge into imatest.ini: This is the ini file that contains the saved settings to be used. A complete copy of imatest.ini should generally not be used. The ini file should include

It is best to remove file names from the ini merge file.

INI file editor opens the merge file in the INI File Editor described below: it is a very powerful tool for preparing merge files for the Functional Interface as well as Imatest IT (the Industrial Testing editions).

Default editor opens the merge file in a standard editor (Notepad in Windows).

You can use the Edit Functional Interface line menu at the top to edit a different button.

Imatest settings are saved in INI files: imatest.ini, rescharts.ini, and multicharts.ini. INI files are updated when settings are changed in input dialog boxes, in the Settings menu of the Imatest main window, or when the ini file is edited (see below). Settings can be edited and saved in named files for use as Functional Interface merge files or IT (Industrial Testing) control files.

You don’t need to know the exact location because the INI File Editor will open imatest.ini (or rescharts.ini or multicharts.ini) from the correct location, which derived from the system environment variable $APPDATA$ (C:Usersuser_nameAppDataRoaming In Windows Vista/7 (English)). The full English-language Windows Vista/7 path name for imatest.ini is C:Usersuser_nameAppDataRoamingImatestimatest.ini. The name may be different in other operating systems and languages.

For Functional Interface merge files or IT control files, non-essential sections and data can be removed by following one of the procedures described below.

The INI File Editor is the same editor that opens when you press Edit/Reset Module(s) from the Settings dropdown menu of the Imatest main window, Rescharts, or Multicharts. It has been enhanced to facilitate creating of INI files for the Functional Interface as well as the IT (Industrial Testing) edition. You can use it to set up a merge file fairly quickly following the steps below.

Method 1: Use an external editor (Notepad).

Method 2: Use the INI file editor.

To complete the button setup,

The button should be ready to boogie. 🙂 Of course you’ll want to test it.

The INI file reference page should be helpful with the Functional Interface as well as the Industrial Testing (IT) edition.