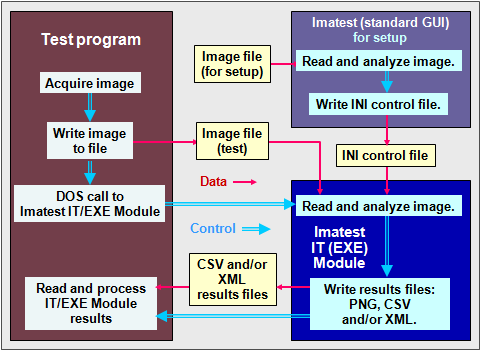 Registering IT/EXE modules (before 3.6): Double-click on register_imatest.bat in the Imatest installation folder (C:Program FilesImatest in English language installations). Fill in the Name, Company, E-mail, and Password fields, keeping IT in the program field, as shown on the right, then press Register.

%% and \ are escape sequences that cause single % and characters to be written. File sfr_battest.bat contains the following two lines:

Several test files (image files, INI control files, and DOS BAT files) are available for testing and verifying IT/EXE installations. The image files can also be used with Imatest Master. Right-click on the file names in the table below to download the files. We recommend saving them in subfolder IT of the Imatest installation folder: C:Program FilesImatestIT (in English language installations) or in the equivalent in other languages (for example, C:Programme... in German). For testing we recommend setting the first parameter in the DOS call to -4 (keep the DOS window open and display the error log if an error occurs).

If a CSV output file were called for, it would be C:Program FilesimatestITResultsStepchart_DR_Canon_G2_summary.csv ;

if an XML output file were called for, it would be C:Program FilesimatestITResultsStepchart_DR_Canon_G2.xml .