Noise is a random variation of image density, visible as grain in film and pixel level variations in digital images. It is a key image quality factor; nearly as important as sharpness. It is closely related to dynamic range— the range of brightness a camera can reproduce with reasonably good Signal-to-Noise Ratio (SNR) and contrast. Since it arises from basic physics— the photon nature of light and the thermal energy of heat— it will always be present. The good news is noise can be extremely low— often imperceptibly low— in digital cameras, particularly DSLRs with large pixels (4 microns square or larger). But noise can get ugly in compact digital cameras with tiny pixels, especially at high ISO speeds, and noise reduction software can have visible side-effects.

In most cases noise is perceived as a degradation in quality. But some Black & White photographers like its graphic effect: Many favored 35mm Tri-X film. (Film grain has very different statistics from digital noise— it’s multiplicative rather than additive, and its spectrum is dependent on density.) Pointillist painters, most notably George Seurat, created images from “noise” (specks of color) by hand; a task that can be accomplished in seconds today with Photoshop plugins. But by and large, the majority of photographers, especially color and large-format photographers, dislike noise with good reason. Noise is measured by several Imatest modules: Multicharts, Multitest, eSFR ISO, Colorcheck, Stepchart, and to a limited degree in SFR, SFRplus, and Uniformity. The first three modules— Multicharts, Multitest, and eSFR ISO— have the most comprehensive noise measurements.

Noise measurements typically refer to RMS (Root Mean Square) noise, which is identical to the standard deviation of the signal S.

Signal-to-Noise Ratio (SNR) is a measurement derived from noise that is often considered more important than noise itself. It is expressed as either a simple ratio (SNR = S/N) or in decibels, SNR(dB) = 20 log10(S/N), familiar to electrical engineers. In digital cameras noise consists of two parts: fixed noise (sensor dark current noise and thermal (resistive) noise) and shot (photon) noise, which increases with the square root of the mean number of photons striking the pixels.

SNR— Since noise is only meaningful in relationship to a signal, a Signal-to Noise Ratio (SNR or S/N) is often calculated. SNR can be defined in many ways, depending on how Signal S is defined. For example, S can be an individual patch pixel level or the pixel difference corresponding to a specified scene density range (1.45 or 1.5 are often used for this purpose) or a low contrast object (for Contrast Resolution SNR). It is important to know precisely how SNR is defined whenever it is discussed. SNR can be expressed as a simple ratio (S/N) or in decibels (dB), where SNR (dB) = 20 log10(S/N). Doubling S/N corresponds to increasing SNR (dB) by 6.02 dB. Since these requirements can be somewhat contradictory, Imatest modules have several noise and SNR measurements, some simple and some detailed.

Multicharts, Multitest, Stepchart, and Colorcheck include the following noise displays:

Multicharts, Multitest, and eSFR ISO contain the most comprehensive noise analysis and displays. The various noise calculations (which include everything from Stepchart and Colorcheck) are listed in the following table (more are added from time to time).

The entry in the third column is from the Noise settings window: 1. No noise, 2. Elementary noise (fast calculations),
3. Advanced noise (slower), and V. Visual noise (separate settings for ISO and CPIQ visual noise).

There are two basic types of noise.

Temporal noise can be reduced by signal averaging, which involves summing N images, then dividing by N. This is an option for all Imatest analysis modules when several image files are selected (you can also analyze the individual files separately). Summing N individual images increases the summed signal pixel level (voltage) by N. But since temporal noise is uncorrelated, noise power (rather than voltage or pixel level) is summed. Since voltage is proportional to \(sqrt{text{power}}\), the noise pixel level (which is proportional to noise voltage) increases by \(sqrt{N}\). Signal-to-noise ratio (S/N or SNR) improves by \(N / sqrt{N} = sqrt{N}\). S/N is improved by a factor of 2 (6.01 dB) for 4 images, 4 for 16 images, etc.

Imatest has several types of Dynamic Range calculation, which are cross-referenced here.

Since scene-referenced noise and SNR are independent of the tonal response curve, they are used as the basis for Imatest Dynamic Range calculations, which are described elsewhere. Dynamic Range is the range of exposure (scene brightness) where quality exceeds a specified level, which we define as 20 dB for “high quality” down to 0 dB for “low quality”. Here is an illustration. The upper curve is the tonal response plot showing gamma. The lower plot is the scene-referenced noise, showing Dynamic Range at several quality levels. 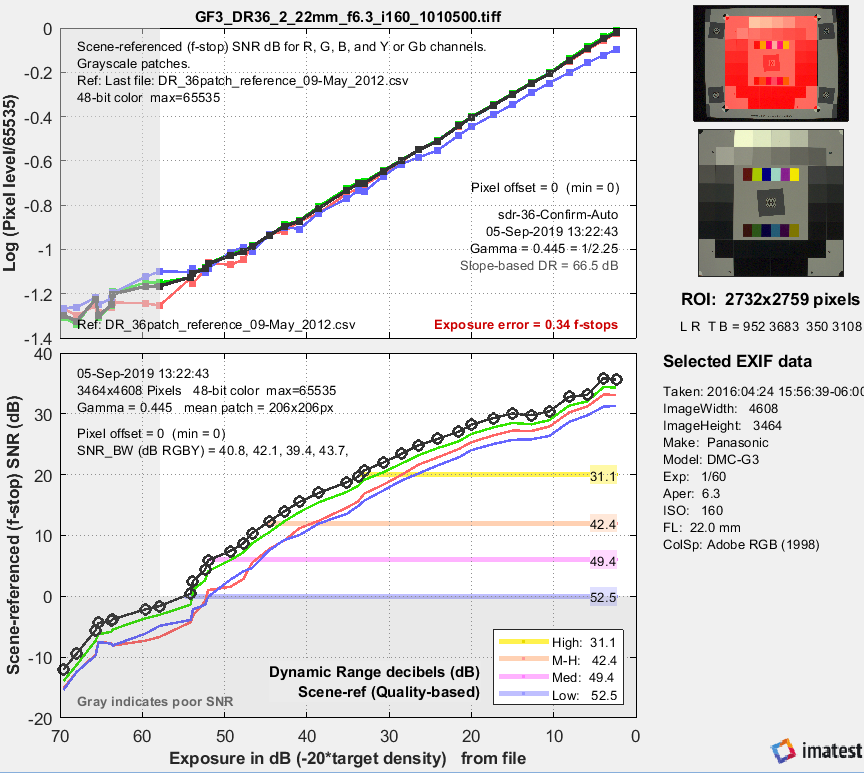 Tonal response and scene-referenced SNR for an image converted from raw with dcraw. 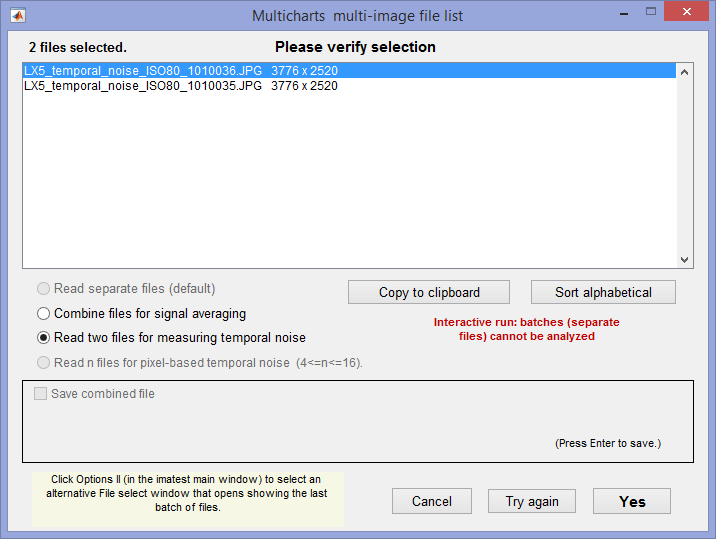 Four Imatest modules—  Multicharts, Multitest, Colorcheck, and Stepchart— can measure temporal noise— noise that varies independently from image to image, with fixed-pattern noise omitted. It can be calculated by two methods:

(1) Difference method. In any of the modules, read two images. The window shown on the right appears. Select the Read two files for measuring temporal noise radio button.

The two files will be read and their difference (which cancels fixed pattern noise) is taken. Since these images are independent, noise powers add. For indendent images I1 and I2, temporal noise is

(2) Multiple file method. From ISO 15739, sections 6.2.4, and 6.2.5. Currently we are using simple noise (not yet scene-referred noise). Select between 4 and 16 files. In the multi-image file list window (shown above) select Read n files for temporal noise. Temporal noise is calculated for each pixel j using

The latter expression is used in the actual calculation since only two arrays, \(sum X_{j,i} text{ and } sum X_{j,i}^2 \), need to be saved. Since N is a relatively small number (between 4 and 16, with 8 recommended), it must be corrected using formulas from Identities and mathematical properties in the Wikipedia standard deviation page.  \(s(X) = sqrt{frac{N}{N-1}} sqrt{E[(X – E(X))^2]}\).

We currently recommend the difference method (1) because our experience so far has shown no advantage to method (2), which requires many more images (N ≥ 8 recommended), but allows fixed pattern noise to be calculated at the same time. There is a detailed comparison of the methods in Measuring Temporal Noise.

The updated ISO 15739:2013 standard has several definitions for noise, SNR, and Dynamic Range that are similar to f-stop noise, but with some important differences. The ISO definition of Signal-to-Noise Ratio (§6.2.3-6.2.5 and Annex D) is

where  σ = noise in pixels, L = luminance (linear), and g is the first derivative of the OECF (pixel level vs. luminance curve).

When ISO 15739 SNR is displayed in Multicharts, Multitest, or eSFR ISO, it can be compared with the older Imatest f-stop-based calculation. Results are similar (though not identical).

In addition to an amplitude distribution, noise is characterized by a frequency spectrum, calculated by taking the Fourier transform of the spatial image. The spectrum is closely related to appearance. Two spectra are shown below, taken from the second Stepchart figure. The first is for the image from column (B), above, which contains simulated white noise. The second is for the image in column (D), above, taken with the Canon EOS-10D at ISO 1600. The images shown below have been magnified 2X (using the nearest neighbor resizing algorithm) to emphasize the pixel distribution. They are close approximations to the images used to calculate the spectra (though not the exact images).

White noise (unfiltered electronic noise is white) has two key properties. 1. The values of neighboring pixels are uncorrelated, i.e., independent of one-another. 2. Its spectrum is flat. The white noise spectrum (above, left) shows statistical variation and a small peak at 0.25 cycles/pixel, probably caused when the image in column (B) was resized for display. For spectral (non-white) noise, neighboring pixels are correlated and the spectrum is not flat. The spectrum and image (above, right) are the result of blurring (also called smoothing or lowpass filtering), which can result from two causes

But NR comes at a price: detail with low contrast and high spatial frequencies can be lost. This causes the “plasticy” appearance sometimes visible on skin. Some people love it (plastic surgeons make a lot of income); I don’t This loss can be quantified with Imatest Log F-Contrast measurements.The visibility of noise depends on the noise spectrum, though the exact relationship is complex. Noise at high spatial frequencies may be invisible in small prints (low magnifications) but very damaging in large prints (large magnifications). Because of the complex nature of the relationship, Kodak established a subjective measurement of grain (i.e., noise) called Print Grain Index (Kodak Technical Publication E-58). Visual noise measurements are intended to predict the visual effect of noise, based on noise spectrum and viewing conditions.

Sharpening and unsharp masking (USM) are the inverse of blurring. They boost portions of the spectrum and cause neighboring pixels to become negatively correlated, i.e., they exaggerate the differences between pixels, making the image appear noisier. USM is often applied with a threshold that restricts sharpening to the vicinity of contrast boundaries. This prevents noise from degrading the appearance of smooth areas like skies. In images taken with poor quality lenses (or misfocused or shaken), the image is lowpass filtered (blurred) but the noise is not. Some sharpness loss can be recovered with sharpening or USM, but noise is boosted in the process. That’s why good lenses are important, even with digital sharpening.

CCD Image Sensor Noise Sources (from On Semiconductor) An excellent, highly readable introduction to the different noise sources. Noise sources in CMOS sensors differ only in relative magnitude.
Neat Image is a remarkable program for reducing noise. Instead of lowpass filtering, the software is trained to recognize the structure of the noise. It can reduce noise with minimal side-effects. Particularly valuable at high ISO speeds.
EMVA 1288 Standard contains an excellent, well-written introduction to the mathematics of noise.
Photography — Electronic still-picture imaging — Noise measurements (ISO 15739:2003) Somewhat difficult to read, but it’s the official standard.  Its Dynamic Range measurement is extrapolated from measurements from a black reference density of 2.0.