using a print of a test pattern scanned on a flatbed scanner. No specialized equipment is required. You can observe response irregularities by viewing the test print, but you need to run Print Test to obtain detailed measurements of the print’s color and tonal response.

The essential steps in running Print Test are 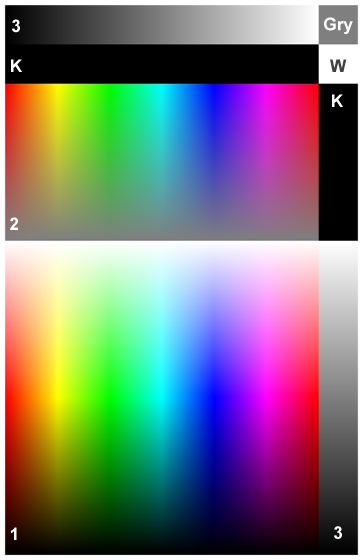 Color quality is a function of gamut— the range of saturated colors a print can reproduce, as well as overall color response— the relationship between file pixels and print color. Tonal quality is strongly correlated with Dmax— the deepest attainable black tone, as well as the tonal response curve. Prints usually appear weak in the absence of truly deep black tones.

The test pattern, shown (reduced) on the right, was generated using the HSL color representation.

The key zones are,

Two color spaces, both of which default to sRGB, need to be entered manually because Print test does not recognize embedded ICC profiles. (And many scanners don’t bother to embed them in their output.)

The two checkboxes in the Plot box select figures to display. (La*b* plots are always displayed.) The HSL contour plots, illustrated below, are derived from RGB values whose meaning is dependent on the color space. They are highly detailed, but lack the absolute color information contained in the La*b* plots. The CIE xy plot is a CIE 1931 chromaticity plot of the gamut (for L = 0.5, S = 0 to 1 in steps of 0.2, and 0 = H = 1). It is familiar, but less readable and less perceptually uniform than the La*b* plot.

Print Test results are filtered by the color space of the scanned file. The Windows default is sRGB, which has a limited gamut. For best results you should scan to a color space with a larger gamut— comparable to your printer. I recommend Adobe RGB (1998). At present I don’t recommend Wide Gamut RGB, which hs a gamut far larger than any printer you’re likely to encounter.

Results below are for Epson 2200 printer with Ultrachrome inks, Premium Luster paper, and the standard 1440 dpi Epson profile. The sRGB test file was used to make the print.

The first Figure contains the grayscale density response and the maximum density of the print, Dmax, where density is defined as –log10(fraction of reflected light). The value of Dmax (2.24) is the average of the upper and right black areas. This value is excellent for a luster (semigloss) paper. Matte surfaces tend to have lower values, typically around 1.8.

The upper plot shows print density as a function of log10(original pixel level (in the test pattern)/255). This corresponds to a standard density-log exposure characteristic curve for photographic papers. The blue plot is for the upper grayscale; the black plot is for the lower-right grayscale. Somewhat uneven illumination is evident. The print density values are calculated from Q-13 calibration curve (lower right). The thin dashed curves contain –log10(pixel levels).

The lower left curve is the characteristic curve (print vs. original normalized pixel level) on a linear scale.

The lower right curve is the results of the (separate) Q-13 calibration run used to calibrate Dmax and the density plot.

CIELAB is a relatively perceptually uniform device-independent color space, i.e., that the visible difference between colors is approximately proportional to the distance between them. It isn’t perfect, but it’s far better than HSL (where Y, C, and M occupy narrow bands) or or the familiar CIE 1931 xyY color space, where gamuts are represented as triangles or hexagons inside the familiar horseshoe curve and greens get far more weight than they should.

The S = 1 CIE La*b* gamut map below displays cross sections of the La*b* volume representing the printer’s response to test file HSL lightnesses (LHSL) of {0.1, 0.3, 0.5, 0.7, and 0.9} where S = 1 (maximum saturation). These values correspond to near black, dark gray, middle gray, light gray, and near white. Printer gamuts are represented as thick, solid curves. The corresponding values for the original color space— the color space used to print the pattern— are displayed as dashed curves.

Note: The L-values below refer to LHSL in the test file, not CIELAB L. 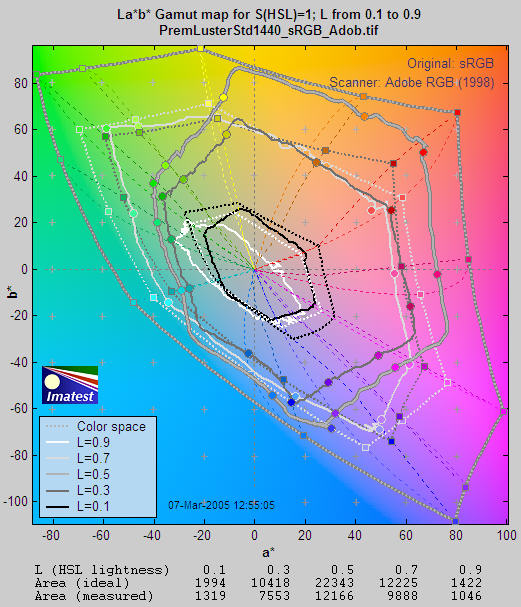 Although this display contains less information than the HSL map (below), the results are clearer and more useful. CIELAB gamut varies with lightness: it is largest for middle tones (LHSL = 0.5) and drops to zero for pure white and black. This is closer to the workings of the human eye than HSL representation.

The petal-like dotted concentric curves are the twelve loci of constant hue, representing the six primary hues (R, Y, G, C, B, M) and the six hues halfway between them.. They follow different curves above and below L = 0.5. The circles on the solid curves show the measured hues at locations corresponding to the twelve hue loci. Ideally they should be on the loci. The curves for L = 0.5 (middle gray) are outlined in dark gray to distinguish them from the background.

The hexagonal shape of the gamuts makes it easy to judge performance for each primary. The measured (solid) shape should be compared to the ideal (dotted) shape for each level. Weakness in magenta, blue, and green is very apparent, especially at L = 0.5 and L = 0.7. But the gamut is excellent for L = 0.3. 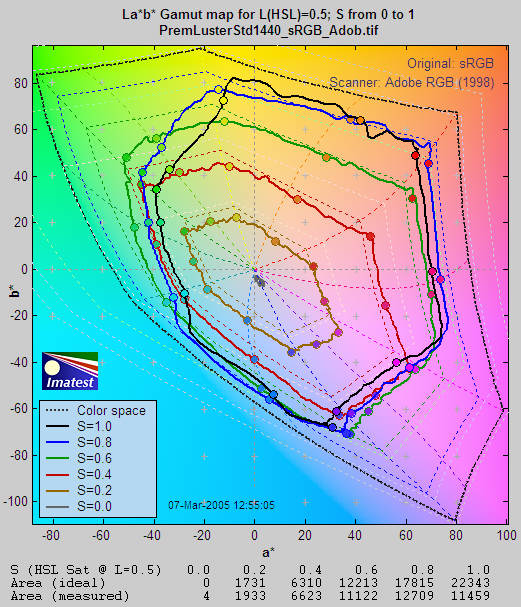 Gamut is excellent for S = 0.2 (brown curve) and 0.4 (red curve). But compression becomes apparent just beyond S = 0.4 for magenta and blue and at S = 0.6 (green curve) for green and cyan, where the printer starts to saturate. Increasing S above these values doesn’t increase the print saturation: in fact, saturation decreases slightly at S = 1. This is the result of limitations of the Epson 2200’s pigment-based inks and the workings of the standard Epson ICC profile. The good performance for relatively unsaturated colors (S = 0.4) is extremely important: skin tones and other subtle tones should reproduce very well on the Epson 2200.

With Gamut maps, differences between printers, papers, and profiles are immediately apparent. These differences are far more difficult to visualize without Imatest Print test because each image has its own color gamut. One image may look beautiful but another may be distorted by the printer’s limitations.

L=0.5 Saturation results can also be displayed in the familiar CIE 1931 xy chromaticity chart. As with the La*b* plot above, Gamuts are shown for 0 = S = 1 in steps of 0.2. As in the the S=1 La*b* Saturation map, the dotted lines and shapes are the ideal values (the color space used to print the pattern) and the solid shapes are the measured values. 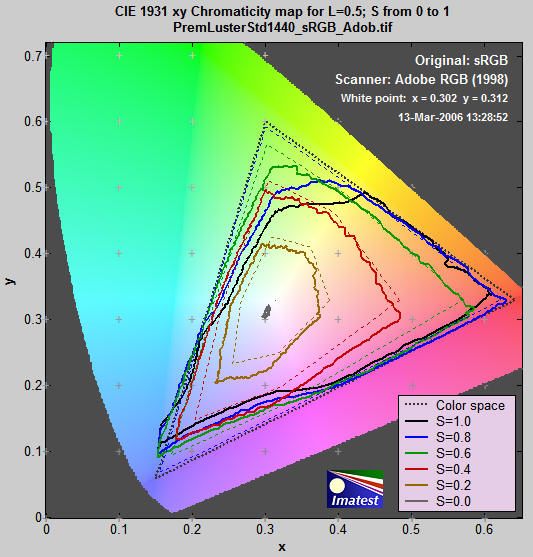 Gamut is excellent for S = 0.2 (brown curve) and 0.4 (red curve). But compression becomes apparent just beyond S = 0.4 for magenta and blue and at S = 0.6 (green curve) for green and cyan, where the printer starts to saturate. Increasing S above these values doesn’t increase the print saturation: in fact, saturation decreases slightly at S = 1. This is the result of limitations of the Epson 2200’s pigment-based inks and the workings of the standard Epson ICC profile. The good performance for relatively unsaturated colors (S = 0.4) is extremely important: skin tones and other subtle tones should reproduce very well on the Epson 2200.

The HSL contour plots that follow display color response in great detail, but don’t contain absolute color information. For that you need the La*b* or CIE 1931 xy plots described above. They work best when the same color space is used to print and scan the target. For these plots to be displayed, Display HSL coutour plots must be checked in the Print test input dialog box.

The HSL Saturation plot shows the saturation levels. If the print and scanner response were perfect, S would equal 1 everywhere. Weak saturation is evident in light greens and magentas (L > 0.5). Strong saturation in darker regions, roughly 0.2 = L = 0.4, could indicate that it might be possible to create a profile with better performance in the light green and magenta regions. Weak saturation in very light (L>0.95) and dark areas (L<0.1) is not very visible. 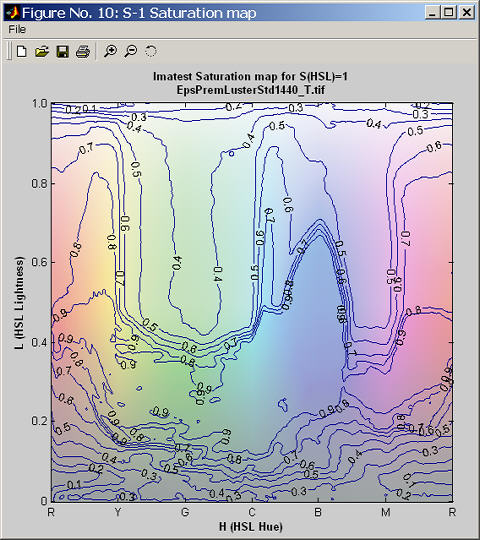 The ideal lightness plot would display uniformly spaced horizontal lines from 0.9 near the top to 0.1 near the bottom. (It generally doesn’t go much below 0.1 because of the effects of Dmax and gamma.This plot shows relatively uniform response except for blues with L between 0.3 and 0.6, which appear darker than they should. 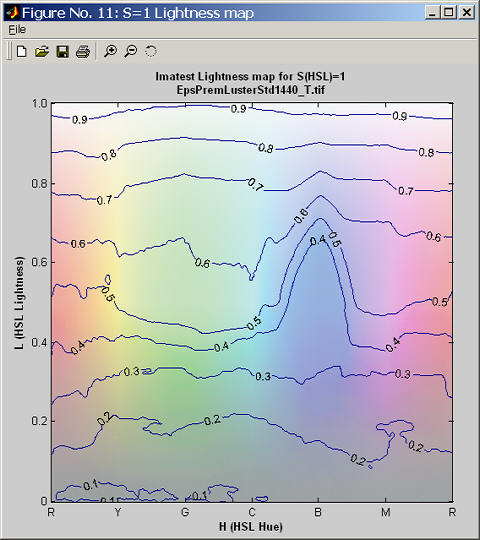 Colors are labelled 0 to 6, corresponding to hues from 0 to 1. This clarifies the plot by making each primary color an integer: Red = 0 and 6, Yellow = 1, Green = 2, Cyan = 3, Blue = 4, and Magenta = 5. This way, contour increments are 0.5 instead of 0.08667. The ideal Hue map would consist of uniformly spaced vertical lines aligned with the x-axis. The hues here are rather good, but blues are a bit bloated and the magentas are somewhat squeezed. This is also visible on the S=1 Gamut map. There is a highly visible irregularity at L=0.6 on the blue-magenta border (also noticeable on the saturation plot). Hue errors in very light (L>0.95) and dark areas (L<0.1) are not very visible. 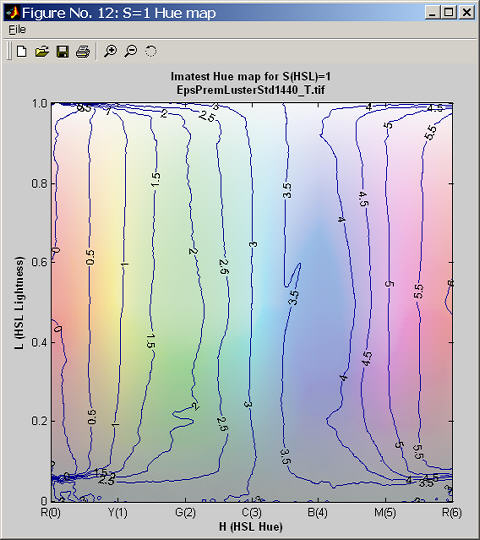 Similar plots are produced for the L=0.5 region, immediately above the S=1 region. 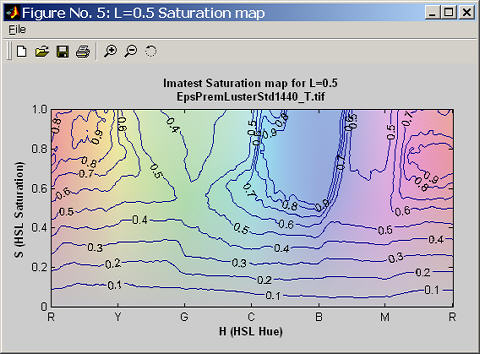 The ideal L=0.5 Saturation map would consist of uniformly spaced horizontal lines from 0.9 to 0.1. The weak saturation in the greens and magentas is visible here. From the viewpoint of overall image quality, behavior at low saturation levels is most visible. The Epson 2200 behaves very well in this region.

An additional Figure with L=0.5 HSLHue and Lightness maps has been omitted.

Digitization and Metric Conversion for Image Quality Test Targets by
William Kress discusses the use and accuracy of flatbed scanners for measuring print quality.