Acutance and SQF (Subjective Quality Factor) are measures of perceived print or display sharpness. SQF was used for years in the photographic industry but has remained unfamiliar to most photographers. Acutance is a relatively new measurement from the IEEE Camera Phone Image Quality (CPIQ) group. Both include the effects of

Acutance is a perceptual measurement that is closely related to SQF, but differs in the details of the equation. It is defined in the IEEE CPIQ (Camera Phone Image Quality) Phase 2 specification, but this document gives little indication of how it should be displayed. Imatest displays it in the same way as SQF. Because of the CPIQ standardization work, which includes correlating Acutance numbers to perceptual quality loss (Just Noticeable Differences = JNDs) we generally recommend Acutance over SQF.

Acutance (or SQF) and MTF

The following table compares MTF and acutance (or SQF). In essence, MTF is a measurement of device or system sharpness; acutance and SQF are measurements of perceptual print or diaplay sharpness, derived from MTF, the contrast sensitivity function (CSF) of the human visual system, and viewing angle (based on an assumption about the relationship between print height and viewing distance).

Acutance and SQF are calculated as a part of the SFR, SFRplus, Star, Random/Dead Leaves, SFRreg, Checkerboard, and eSFR ISO modules. To display it, check the Acutance/SQF checkbox in the settings box, making sure the Acutance/SQF settings (described below) are appropriate. Here is a sample result. 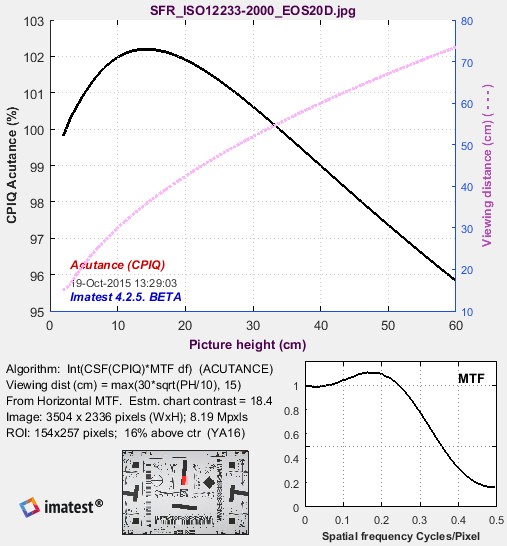 Acutance or SQF can be measured in Imatest SFR, SFRplus, Star, Random/Dead Leaves, SFRreg, Checkerboard, and eSFR ISO You need to check the Acutance/SQF checkbox in the Settings box and be sure the Speedup checkbox is unchecked. Settings will be remembered in succeeding runs.

Clicking on SQF/Acutance Options to the right of the SQF checkbox opens this dialog box for setting SQF options. Most of the time you’ll want to leave them unchanged (except for Maximum print height, which doesn’t affect the calculations) at their default values, which you can always restore by pressing Standard SQF or CPIQ Acutance. 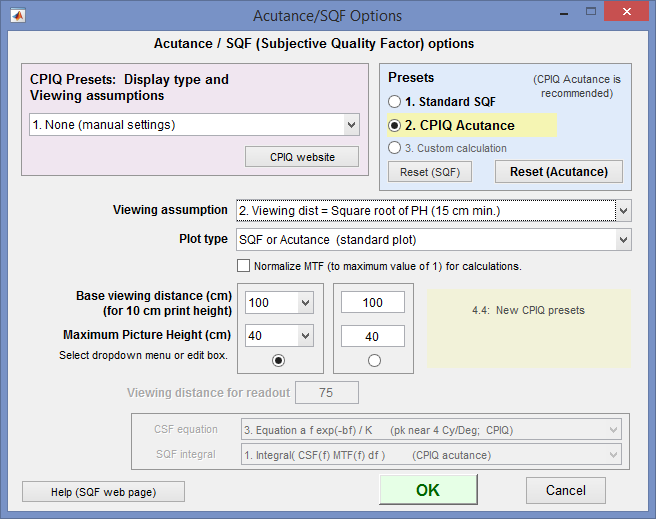 Of course Viewing distance is a broad average: we often move in and out when we critically examine a print. But some assumption must be made for the SQF/Acutance calculation to proceed. We believe that choice 2, Viewing distance proportional the square root of the picture height, best represents the typical impression of sharpness for a range of prints. But many developers require an analysis at a fixed viewing distance or display size.

Base distance Defined according to the Viewing assumption setting. It should be left at its default value of 30 cm (12 inches) unless there is good reason to change it. 34 centimeters has also been used for measuring perceived quality in 10 cm high (4x6 inch) prints.

Maximum print height is the maximum to plot. (Note that the height setting assumes landscape orientation: wider than tall.) It has no effect on the calculations. The default is 40 cm (16 inches), which is about as large as prints from consumer digital cameras get. Picture heights of 60 cm (24 inches) and larger are of interest to users of professional-quality digital SLRs. 20 cm is a stretch for camera phone images.

Standard SQF or CPIQ Acutance resets settings to their default values. (It doesn’t affect Maximum print height, which has no effect on the calculations.) We recommend keeping all settings at their default values, unless there is good reason to change them. This will help ensure standardized measurements and minimize confusion.

Following the convention elsewhere in the Imatest site, we put the math in green boxes, which can be skipped by non-technical readers. The Acutance equation, which is recommended by the Camera Phone Image Quality (CPIQ) group is shown first. SQF is primarily of historical interest.

The human eye’s contrast sensitivity function (CSF) is limited by the eye’s optical system and cone density at high spatial (or angular) frequencies and by signal processing in the retina (neuronal interactions; lateral inhibition) at low frequencies. Various studies place the peak response at bright light levels (typical of print viewing conditions) between 6 and 8 cycles per degree (around 4 for the CSF equation used for acutance). We have chosen a formula, described below, that peaks just below 8 cycles/degree.

You may learn something about your own eye’s CSF by viewing the chart below at various distances and observing where the pattern appears to vanish. Chart contrast is proportional to (y/h)2, for image height h. To my eyes (which underwent Lasik refractive surgery in 1998 to correct for 10 diopter nearsightedness) it appears that the peak in the curve on the right should be considerably broader. But this isn’t quite the case because of the eye’s nonlinear response to contrast. Although the chart below appears to decrease in contrast linearly from top to bottom, the middle of the chart has 1/4 the contrast as the top. 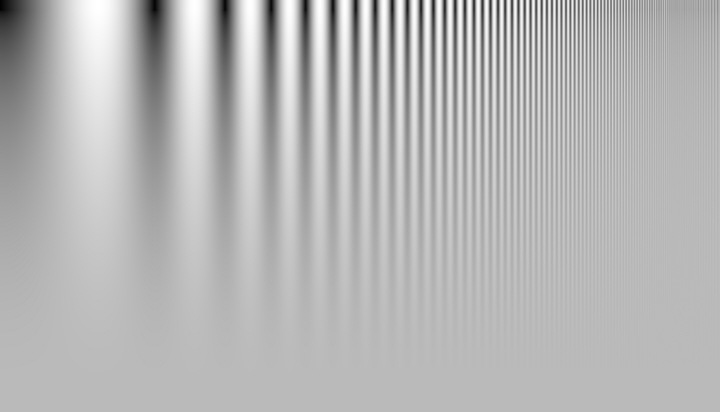