Note: This article was originally published in 2006. Products and profiles have changed, but fundamentals have not.

Gamutvision can display plots that appear to represent the color gamut of input devices— scanners and cameras— but these plots must be interpreted with great skepticism because the RGB input pattern used by Gamutvision (and other gamut viewers) contains RGB values that almost certainly can’t be produced by most cameras or scanners in response to real, physical light. Hence the actual gamut is typically smaller than the displayed gamut — and it might be accurate to say,  the gamut of input devices can’t be defined at all.  The reason is illustrated below in Kodak’s published spectral response for the Kodak KAF-10500-CX image sensor used in the Leica M8.

There is considerable overlap between colors. That means that a sensor output that has not been processed (except possibly for linear scaling) can never include pure R (255,0,0), G (0,255,0), or B (0,0,255) signals. Of course some signal processing is likely to take place because the KAF-10500 sensor output is an analog voltage: conversion to a digital signal takes place outside the sensor chip, and is likely to include manufacturer-proprietary processing— even in RAW files.

Another observation from this figure is that the R:G:B voltage ratio is unique for any monochromatic (single-wavelength) signal inside the visual spectrum (about 380-720 nanometers), hence the sensor can, in principle, distinguish any visible wavelength: it’s gamut encompasses the full gamut of human vision. The actual gamut of a camera depends on the quality of the profile: on how well it handles strongly saturated colors. This can’t be determined from a profile alone because it doesn’t contain information on the relationship between all possible colorimetric values of illumination and a camera’s RAW R,G,B values. Profiles are built from charts with limited numbers of color patches that cannot approach pure monochromatic values. They contain no information on which R,G,B triplet values don’t correspond to physical light.

Some of your may have come across images of film gamut— usually displayed as CIE xy plots— (they’re not very common). Film gamut displayed in these diagrams is quite large: larger than Adobe RGB (1998), though not equal to ultra-large gamut color spaces such as WGRGB or ProPhoto RGB.

It is important to realize that film gamut does not represent the range of film response to color : it is the range of colors that the film dyes can reproduce, ie. it is the film’s output gamut. It has nothing to do with the film’s response. For this reason, comparing film gamut to the gamut of digital cameras (or at least the “gamut” displayed by gamut viewer programs) is meaningless: it’s about as classic an apples vs. oranges comparison as you can get.

EOS 20D.icc was apparently installed along with Canon’s DPP (Digital Photo Professional) RAW conversion software, though I found no obvious means of selecting the camera profile in DPP. It certainly came from Canon— it bears their copyright. And there’s no doubt which camera it’s intended for. The first image is a 3D L*a*b* plot that shows the full gamut of the EOS 20D (solid; input profile 1) as well as the full gamut of the Adobe RGB (1998) color space (wireframe; output profile 2). All images on this page are somewhat reduced. 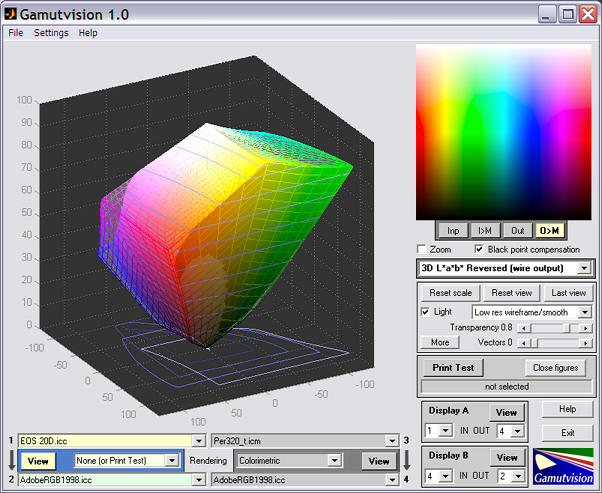 The display has been rotated to emphasize the differences between the profiles. Note that there is no gamut mapping in this diagram: the rendering intent has been set to None. Also, the normal 3D display order has been reversed: 3D L*a*b* Refersed (wire output) (i.e., solid input) has been selected. The normal 3D display (wireframe input, solid output) makes sense when the output gamut is smaller than the input gamut, as it is for most printer output profiles. But in this case, the EOS 20D gamut is slightly smaller than Adobe RGB (1998).

The image below shows the results of two mappings: 1→2: EOS 20D.icc→AdobeRGB1998.icc, and 3→4: EOS 20D.icc→*sRGB. There are a number of ways the results can be displayed; the plot below takes advantage of Gamutvision’s Display A/Display B feature, which allows any two results to be compared on the same plot— and to be quickly switched. 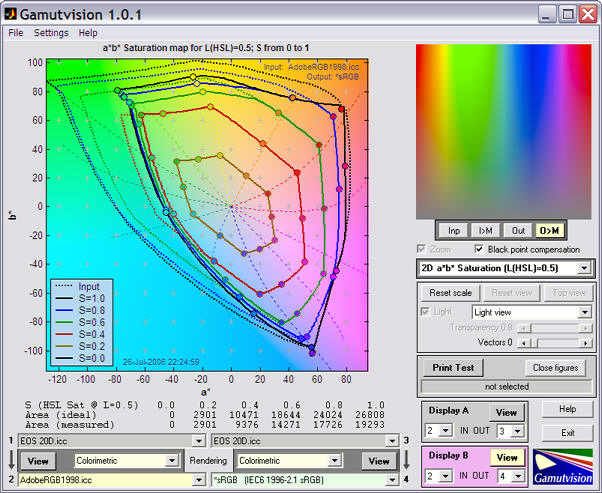 The dashed lines are the Adobe RGB (1998) output, mapped with colorimetric rendering intent from EOS 20D.icc; the result of the 1→2 mapping (which gives the same results as perceptual and saturation intent for this profile). The solid lines are the sRGB output; the result of the 3→4 mapping. It is clear that Adobe RGB has a much larger gamut in the green to cyan range. The 2D a*b* saturation plot is excellent for comparing gamuts, but keep in mind that it only displays middle tones, where colors are most intense. It doesn’t display gamut differences for highlights or shadows.

Epson flatbed scanners that include transparency units for scanning film come with two profiles: one for reflective operation, the other for transmissive operation, i.e., film scanning. For the 4870 the profiles are named Per487_r.icm and Per487_t.icm, respectively. They may still be available. 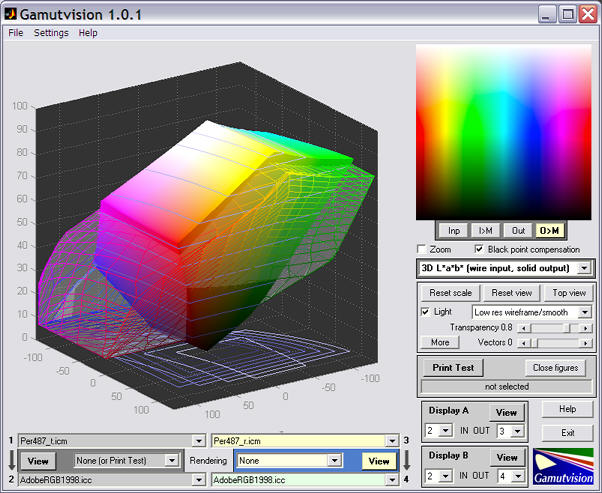 In the Gamut section of Michael Reichmann’s Leica M8 – A Hands-on Field Review (about half-way down the page), Michael discusses the gamuts of various digital cameras, illustrating them with xy chromaticity diagrams derived from ICC profiles supplied by Phase One. Towards the end of this section he states,

The bottom line on this discussion is that the Leica M8 appears to have the widest colour gamut, by a wide margin, of any camera of which I am aware. Does this translate into any image quality advantage? According to Dr. Know, a friend who writes raw software, and who is extremely knowledgeable in this area, the answer is likely no. Gamut plots of camera profiles are not particularly meaningful and don’t correlate with actual sensor or camera performance. But, nevertheless I have to think that we are seeing something at work here, if not just an indication of what electronic filtering is taking place inside the camera. If anyone really does understand the implications of what we’re seeing here I would enjoy hearing from you. Please though – not what you guess, not what you imagine, but what you actually know to be at work here.

Here is my response. Michael felt it would go over the heads of most readers. (Note: “Dr. Know” is evidently Thomas Knoll, the original author of Photoshop.)

I wrote Gamutvision and Imatest so I (and others) could answer questions such as this.

The quick answer is that “Dr. Know” is correct. You can’t derive a camera’s gamut from its ICC profile. I had hoped to do so— a reasonable expectation since you can obtain accurate monitor, color space, and printer gamuts from profiles.

The reason is that gamut viewer programs start with a set of RGB pixel values that represent the RGB gamut limits— the most saturated possible RGB colors— then use the profile to transform these colors into a device-independent color space (CIE XYZ or CIELAB) that can represented by a familiar diagram like CIE xy. In a similar manner, camera output, which consists of de-mosaiced RGB values, is transformed by the profile into CIE XYZ for further conversion to the output color space (sRGB, Adobe RGB, ProPhoto, etc.).

Gamut viewers can’t estimate camera gamut because most of the RGB values near gamut limits can never be output by the camera— and the profile contains no indication of which RGB values the camera can produce. All the profile does is map RGB values to corresponding device-independent CIE XYZ values, regardless of whether or not the camera can produce them— even if they don’t correspond to physical reality. Colors close to those in the test chart used to create the profile should be mapped correctly, but anything can happen to RGB values that don’t correspond to valid, physical colors: strange spikes and irregularities often appear in gamut representations. These irregularities are meaningless: they are computation artifacts that do not indicate how the profile handles real colors.

I alluded to this in a comment I made in Gerard Kingma’s article on Gamutvision and PrintFIX PRO. “Gamutvision uses a test pattern with the most saturated possible RGB values, but the scanner may not ever output these values in practice. So the actual scanner gamut may be smaller than the gamut displayed by Gamutvision. No easy way around this…“

The boundaries of the CIE xy “horseshoe” diagram represent monochromatic light— anything outside the diagram is non-physical. The closed horseshoe represents the limits of human vision. Colors displayed by gamut viewers that are outside the horseshoe boundary correspond to RGB values that can never be produced by a camera in response to a real, physical stimulus. Their existence is clear evidence that gamut viewers can’t produce valid results for camera or scanner profiles.

Camera gamut is primarily determined by the the sensor’s spectral response or quantum efficiency, which can be found in the manufacturer’s data sheets. Kodak publishes these curves for a great many sensors, including the KAF-10500 sensor used in the Leica M8, the KAF-39000 used in the Phase One P45 back. You can find them by navigating from www.kodak.com/go/imagers. It’s not easy to calculate (or even define) total camera gamut, but we can make an important observation: digital cameras can detect all visible colors (roughly 380-720 namometers), and since each monochromatic (pure spectral) color appears to have a unique (R:G:B) ratio, all visible colors can be distinguished, and are potentially inside the camera’s gamut. But the actual camera gamut depends on details of the implementation that can’t be extracted from the ICC profile.

The shapes of the the spectral response (quantum efficiency) curves of the KAF-10500 and KAF-39000 are quite similar (an indication that their gamut is similar), but there is one interesting difference: red efficiency is much higher relative to blue and green in the KAF-39000. This means that R values output by the KAF-39000 will be larger, resulting in a weaker CIE XYZ value for pure red (255,0,0): a value neither sensor is ever likely to output. This result is clearly visible in your images, where the P45 appears to have a much weaker red response than the M8. But this is a gamut viewer artifact; it bears no relationship to the camera’s true gamut.

Camera gamut is also affected by two other factors: lens flare and exposure. Lens flare tends to smudge the most intense colors, hence it reduces camera gamut in real-world situations. Leica lenses are renowned for having low flare. Exposure affects the measured gamut in rather complex ways— especially since many cameras have exposure strategies designed to match RAW conversion algorithms. For example, many cameras may underexpose relative to the ISO standard, then perform RAW conversion with a “shoulder” to reduce the likelihood of saturating highlights— a generally excellent strategy, but one that doesn’t make gamut measurement easy. Overexposure always reduces the measured gamut.

The best way to measure a camera’s color response is to photograph and analyze color a chart that includes relatively saturated colors. The 24-patch ColorChecker is insufficient for this purpose; the ColorChecker SG and the (relatively inexpensive) IT8.7 charts are much better. Imatest Color/Tone supports both and provides a great deal of information about camera color response.