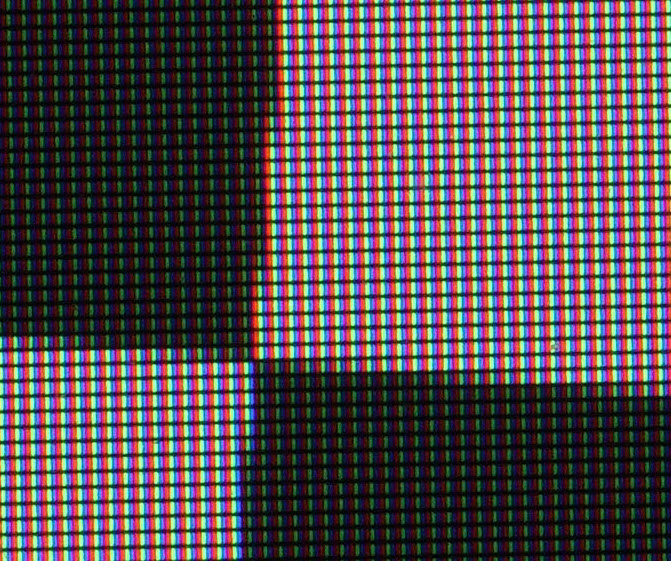 Although Imatest is primarily orientated toward testing cameras, it includes several tests for monitors (displays). It can measure the sharpness of all sorts of displays, including flat panels, projectors, heads up displays (HUDs), virtual & augmented reality head-mounted displays (HMDs) .

It can also measure display defects, as described in Testing display defects with Imatest Blemish Detect, as well as the sharpness of Camera Monitor Systems (CMS).

This post describes how to measure monitor sharpness. It applies to a large variety of displays and monitors. The technique is similar to CMS measurements, but there are a few differences.

1. Display a test chart pattern on your screen

We believe that the slanted-edge is the best pattern for representing a display’s visible sharpness. Slanted-edge MTF analysis is based on the widely-used and well-accepted ISO 12233 standard, which is Imatest’s primary method of measuring sharpness. 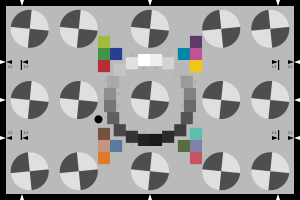 A downloadable SFRreg bitmap image with multiple slanted-edges (small file size because it’s a PNG) is shown on the right. It is derived from one of many vector graphics test patterns that can be generated by the Imatest Test Charts module and rasterized using Inkscape.

10:1 edge contrast is higher than the the standard 4:1 contrast specified by ISO 12233 for camera sharpness, but the higher contrast facilitates edge detection in the presence of the monitor pixel structure. 10:1 is a “sweet spot” for display MTF measurement; we don’t recommend higher contrasts.

This image can be displayed with an image viewer that can be set to 1:1 magnification (where one image pixel corresponds to one screen pixel). Irfanview and Fast Stone Image Viewer are two excellent free viewers. We particularly like Fast Stone, which makes it easy to display the image at 1× magnification and move the image around the screen for good framing.

You can also download a vector graphics PDF version of this chart, SFRreg_center_no_distort.pdf, which can be displayed in any PDF viewer at any magnification with maximum screen resolution. 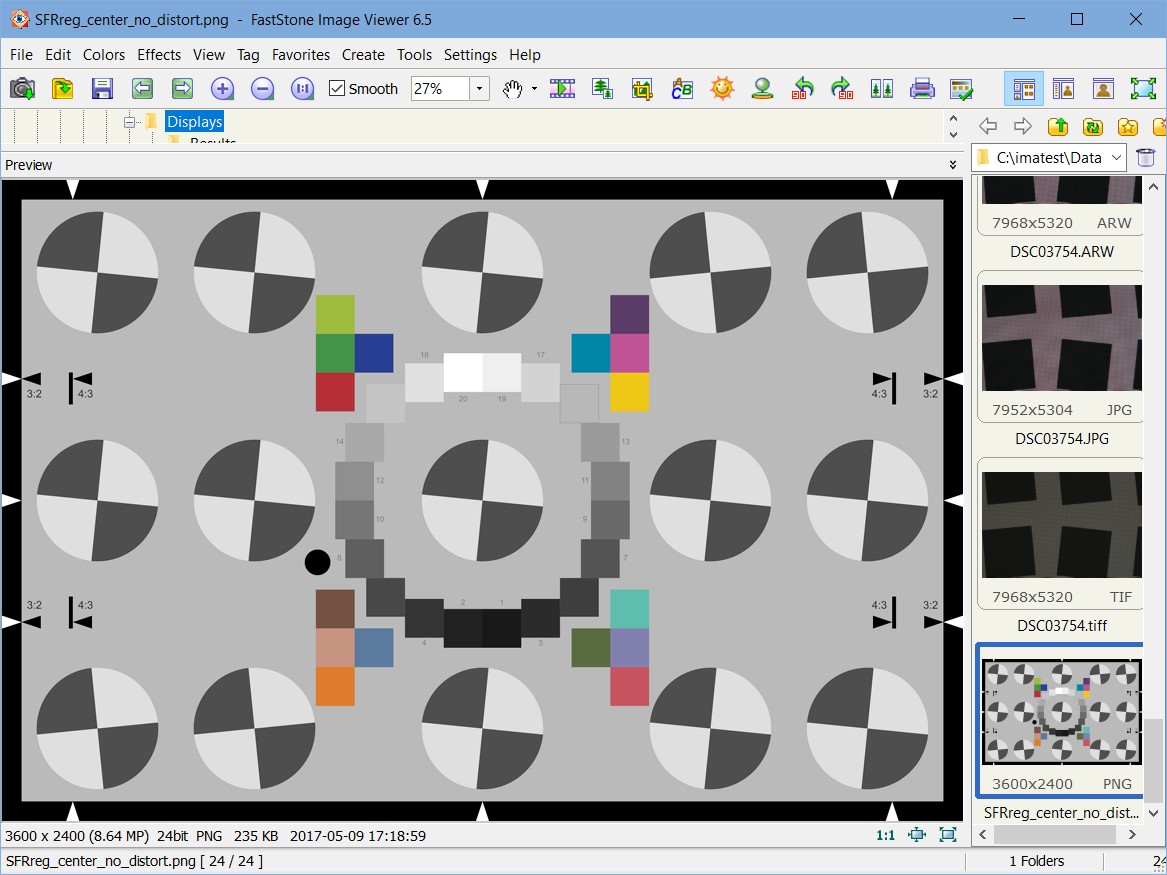 Though the Imatest Screen Patterns module can be used to display a test pattern directly from Imatest, it’s not recommended because of image resizing issues on systems with multiple monitors with different scaling settings.

Takeaway —  Almost any image of a slanted-edge will work as long as it’s displayed with the maximum sharpness of the monitor. 10:1 contrast is recommended.

2. Capture a high-resolution image of your display

Camera and lens — Use a high quality mirrorless or industrial camera to photograph your display or projector image. Modern Micro Four-Thirds or APS-C mirrorless cameras work very well (full frame cameras are overkill). DSLRs are not recommended because of mirror slap, and because mirrorless cameras are now so widely available. For testing monitors, use a high quality macro (close-up) lens, preferably one with magnification on the scale (or magnification easily derived from the distance setting).

Here are some images from our tests of the ASUS PB278 monitor with the A7R II/90mm TS lens at 0.29× magnification. More details in section 3, below. These were RAW images converted with dcraw. Luminance and color saturation were considerably less than the in-camera JPEG. 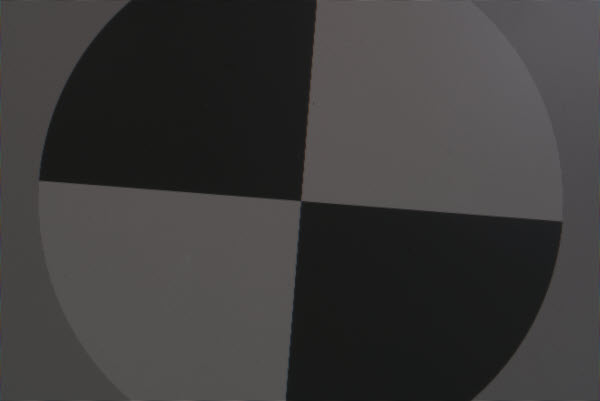 Entire image (greatly reduced). Only a small portion of the screen has been captured. 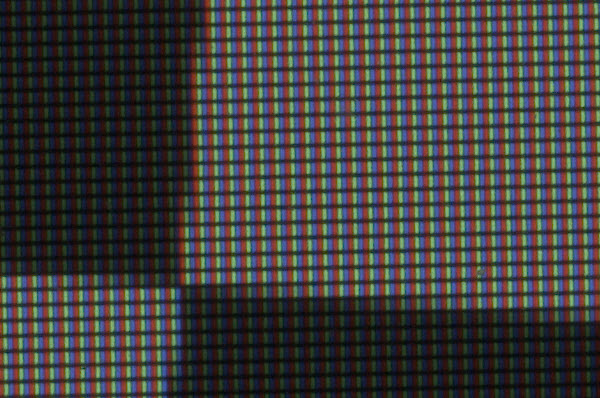 Crop of image at 1:1 magnification. Note the slanted-edges in the original image.

3. Analyze the captured image with Imatest

Open the image in Imatest SFR. Here are the recommended dcraw settings for directly reading a RAW image for a commercial camera. 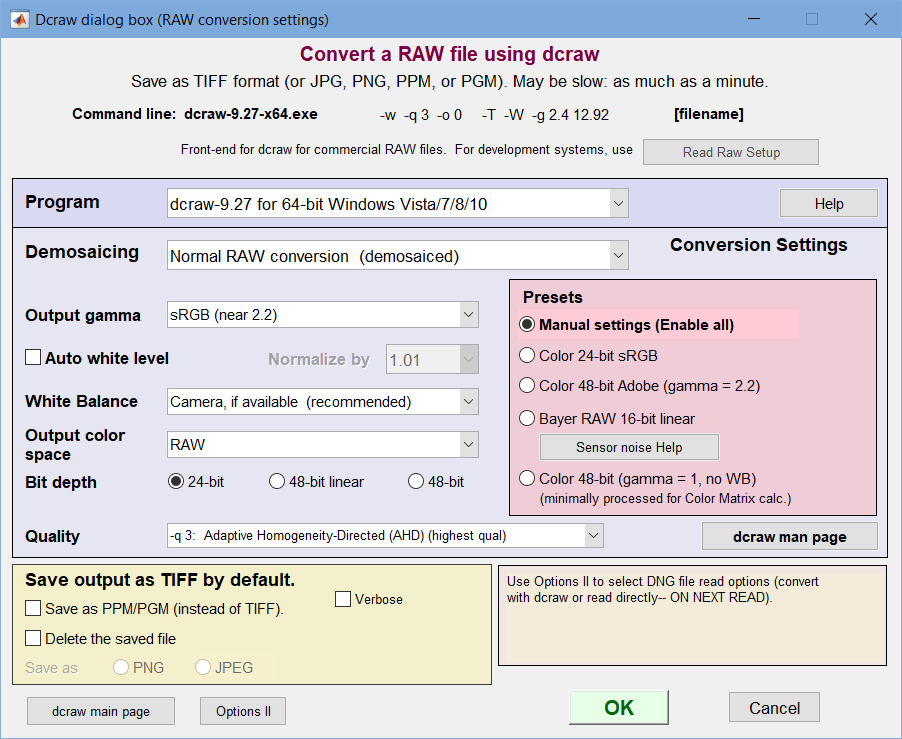 Output color space = RAW tends to keep color saturation low, leading to slightly improved results. You may want to try other settings: these are not requirements. Select two regions, one near-vertical and one near-horizontal, to analyze. Here is the ROI repeat window, showing both regions. The color bands are an aliasing effect: they’re not in the image. 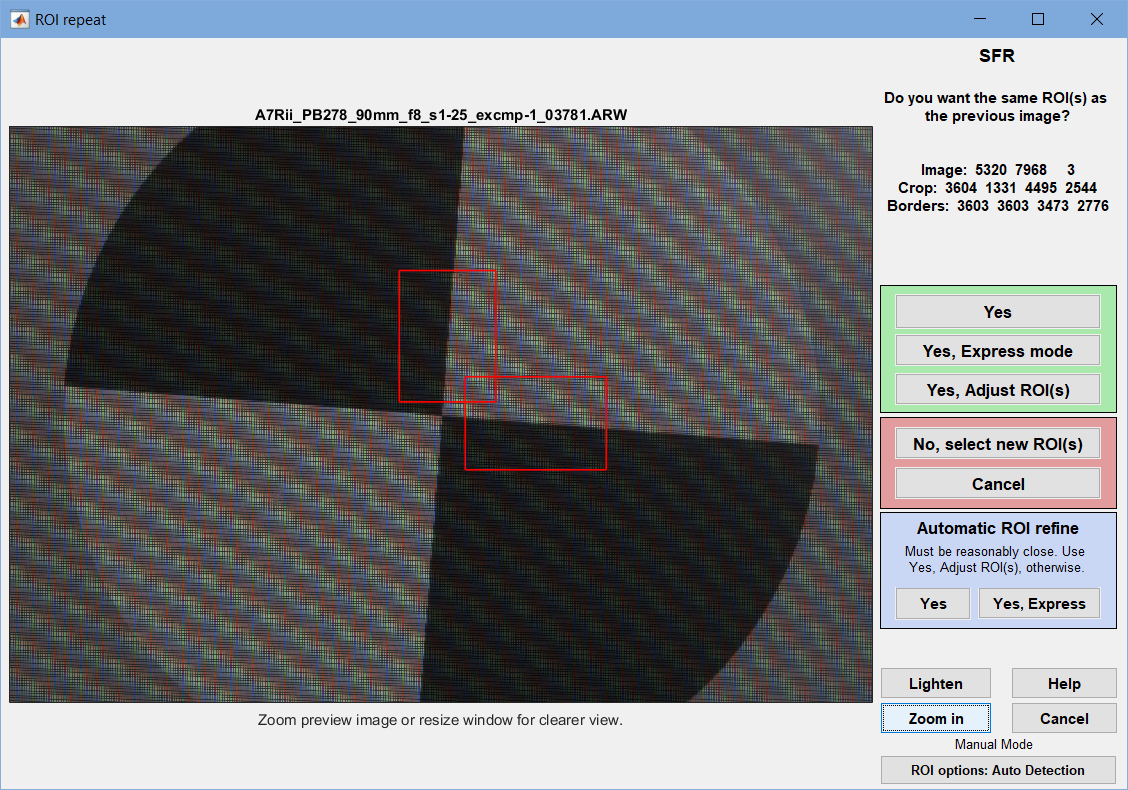 ROI repeat window, showing the two regions
The moiré pattern is an artifact of the display resolution; it’s not in the original image.

Click Yes to bring up the SFR settings window. (Yes, Express mode is fine if you don’t need to change settings.) 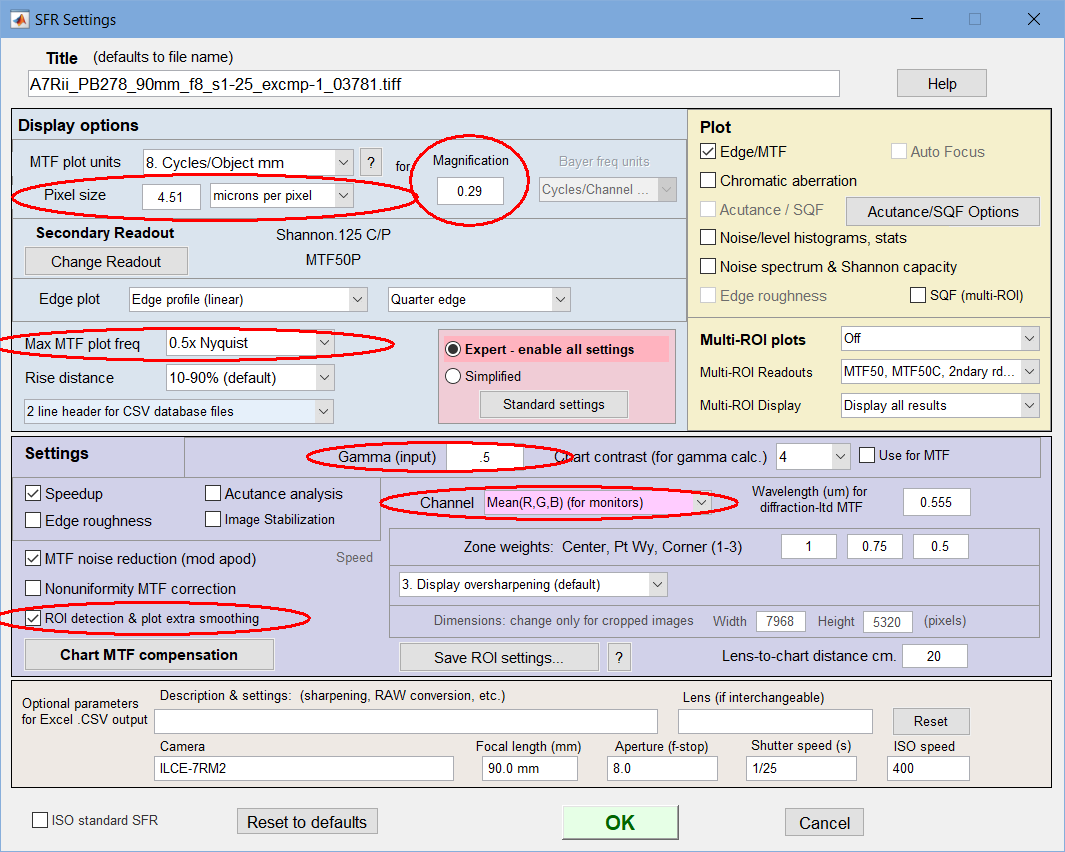 Here are the results for vertical and horizontal edges. Click on the images to view them full-sized.

In the Settings window, set MTF plot units to LW/N Pixels (PH) (or LP/N Pixels (PH)), then enter the Monitor image height (pixels) (which may be much larger than the test image) into the box labeled Picture Ht (pxls) to the right of Pixel size. From Appendix II,

For some applications MTF in LW/Display Height may be more appropriate than Cycles/Object mm for specifying display performance.

TV lines were a common means of characterizing monitor or system sharpness in the old days of analog imaging, when Cathode Ray Tubes ruled the earth. They are still of interest because they can be used to compare analog and digital imaging systems.

TV lines are defined as the number of visibly distinguishable vertical lines measured over the height of a monitor. In this context, “Lines” refers to Line Widths (LW), where 1 cycle (Line Pair) = 2 Line Widths. This definition (Wikipedia) works well with Imatest measurements. For digital systems , the number of TV lines is approximately MTF20 (or better, MTF20P) in units of Line Widths per monitor height. Strictly speaking, MTF10 is closer to the Rayleigh diffraction limit, but MTF10 can be strongly affected by noise and other artifacts. MTF20P (which is less sensitive to strong software sharpening than MTF20, and usually isn’t very different from MTF10) is more robust and stable.

Monitors are not linear devices. They are designed so that Brightness is proportional to pixel level raised to the gamma power, i.e., \(\text{Brightness = (Pixel level)}^{\gamma-display}\).

Camera Monitor Systems (CMS), are described in their own page. They use different units and don’t require as high a magnification of the monitor image, i.e., you should capture the complete monitor, instead of just a crop as we’ve done here. Here is a diagram of a typical CMS.

MTF units should be expressed in Line Widths per Display (Monitor) height. To do this, measure the monitor height in pixels in the camera image. In the settings window (shown on the right for SFR), select MTF plot units of 12. LW/N Pixels (PH) and enter the measured monitor height in Picture Ht (pxls). MTF plot units will be equivalent to LW/Monitor Height.

If the monitor height extends beyond the image, and the magnification is known, the following equation can be used to calculate the Monitor image height in pixels.