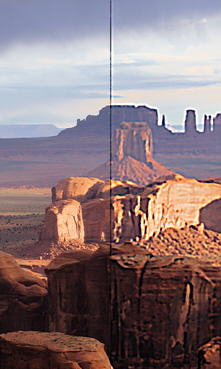 Software (especially operations performed during RAW conversion) can cause significant visual artifacts, including oversharpening “halos” and loss of fine, low-contrast detail. These artifacts result from nonlinear (nonuniform) signal processing (so-called because it varies with the signal). Images may be sharpened (MTF boosted) in the proximity of contrasty features like edges and blurred (lowpass filtered) in their absence. This generally improves measured performance (both sharpness from slanted-edges and noise/Signal-to-Noise Ratio (SNR) from chart patches), but it may result in a degradation of perceived image quality, for example, a “plasticy” cartoon-like appearance of skin even though edges are strongly sharpened. This loss of detail cannot be measured with SFR.

Some artifacts can be measured by the Log F-Contrast module, which analyzes the chart shown on the left, which varies logarithmically in spatial frequency on the horizontal axis and in contrast on the vertical axis. The Random/Dead Leaves module is also useful for observing and measuring artifacts: a particularly egregious case is presented here. 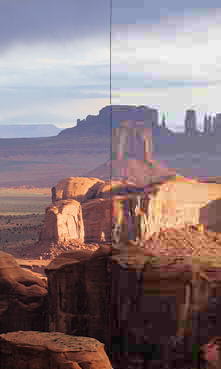 Data compression and transmission losses can have a significant effect on image quality. The right side of the image on the left has been saved as a low quality JPEG. Banding, loss of low-contrast detail, and “waviness” near edges are visible.

Some of these losses, especially the loss of low-contrast detail, can be analyzed with the Log F-contrast  and Random/Dead Leaves modules.

The SSIM module, introduced in Imatest 4.3, provides a detailed measurement of compression/transmission losses using two images: a processed and a reference image. The images must be derived from the same capture and must have the same pixel size. Any arbitrary image can be used with this module, including images of several Imatest test charts, especially the two mentioned in the above paragraph.