What to do when Imatest fails

If Imatest crashes and there is no obvious fix, we strongly recommend that you report the crash to us. There are two methods for reporting crashes.

For most errors, the Error reporting window, shown below, will open.

If you have an error that blocks you from running Imatest (and you have no easy fix), we encourage you to send us the error by pressing  Send Error Report . When you press this button, a second window will open that lets you enter your email (so we can contact you) and a description of the error. Once you’ve done this, press Send Error Report  in this window. 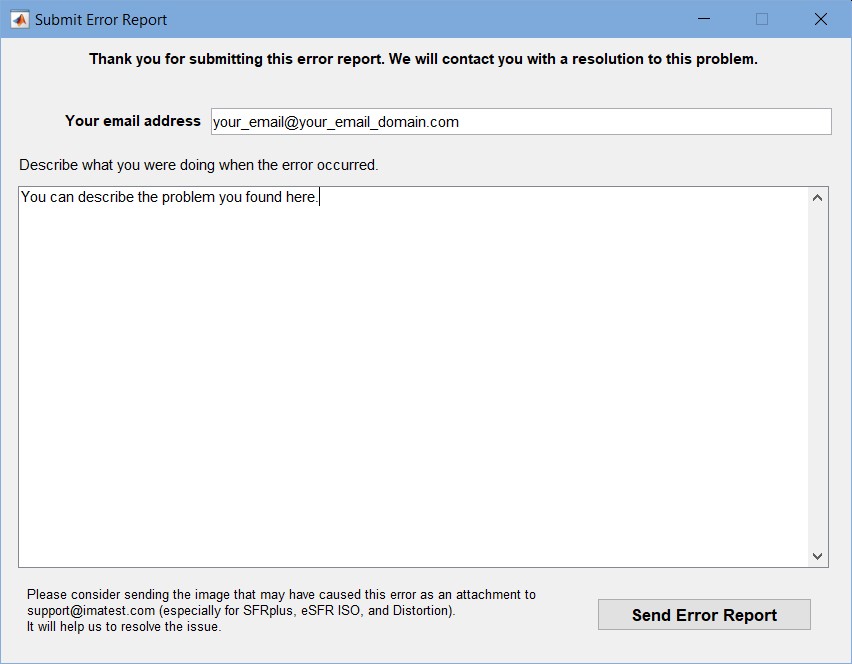 Submit Error Report window: for sending your email address and a description of the error

If the error occurs while you are analyzing an image, we encourage you to send us the image, which is easiest to do by attaching it in a separate email to support@imatest.com. We can quickly find errors caused by incorrect or badly framed images. It never hurts to read the instructions.

2. Copy, paste, and send to support@imatest.com

This method should only be used for the infrequent case of errors where the Error reporting window, shown above, does not open.

If the crash caused the Imatest window to close, there are some additional procedures for reporting errors in The Command (DOS) window (below).

If possible, we recommend that you run the current Imatest version. You should always run the most recent version allowed by your license (you can activate versions released up to one year from the date of purchase: see the Change Log). Newer versions contain fixes for bugs found in earlier versions as well as enhancements.

The version number appears in the top bar of the Imatest main window, and the build date (most relevant if you’re running a Beta version) appears when you press Help, About. If your version is older than the latest version shown in the Change Log, we recommend that you download, install, and run the latest version. It’s usually unnecessary to uninstall a previous version.

If Imatest stops working, the problem is often a bad entry in imatest-v2.ini (imatest.ini, prior to Imatest 4.2), described below. Uninstalling Imatest Imatest rarely helps, and reinstalling it only helps in rare cases where system files go missing. Imatest-v2.ini issues should always be addressed first. Clicking on Error reporting at the bottom of the Imatest main window opens the window shown below, which has concise instructions on how to deal with errors as well as direct links.

Update installations do not normally require an uninstall of the previous version, but if you encounter difficulties you may want to uninstall and reinstall Imatest. The Uninstaller is accessible from the Start menu (Start, All programs, Imatest, Uninstall) or from the Add or Remove Programs function of the Control Panel. It gives you the option of keeping or removing the Matlab runtime library archive (Imatest-lib.exe in versions prior to 3.6). (Keep is the default; you have to check the box to remove it.) Keeping it speeds up reinstallation. Remove it only if you don’t plan to reinstall Imatest or if you have good reason to suspect it may be corrupted (a rare occurrence). Click here for full installation instructions.

Recent versions of Imatest only work on 64-bit computers. A Matlab version history is given in Wikipedia. It has some omissions.

Imatest versions 3.6+ use new Matlab compilers (Versions 4.11+) in place of the old R13 compiler (Version 3.0.1). The new compilers require a much larger library download: the ~200MB Matlab Compiler Runtime (MCR) (a sort of virtual machine). Imatest is normally compiled as a 32-bit application, which runs on 32 and 64-bit computers. (64-bit applications have little performance advantage and won’t run on 32-bit computers.)

When the installation is finished,

The first time you install Imatest 3.6+ with a new library (V7111, V714, etc.), you should make sure that Matlab Libraries is checked in the Choose Components window. Library installation takes several minutes. Once the correct MCR for your version has been installed, you don’t need to check this box when updating Imatest.

If you try running Imatest before the MCR has been installed the following message may appear. Reinstalling with the Matlab Libraries box checked will fix the problem.

This application has failed to start because mclmcrrt714.dll was not found.

Installation or registration can fail if

If you have receive an indication of a “DNS error” (very rare), try clicking Start, Run… Enter ipconfig /flushdns in the Open… box, then click OK.

Error: Could not find version m.n of the MCR.

This error may be caused by an MCR (Matlab Compiler Runtime, i.e., library) installation failure or by a problem with the path in the bat file that runs Imatest. It is most likely to occur in Imatest 3.7 and early builds of 3.8 when

In typical 64-bit Windows 7 English-language installations the Imatest installation folder is C:Program Files (x86)\Imatest\Master. This folder may be different for different versions of Imatest, operating systems, and languages.You should locate it on your system.

The path is set in file run_imatest.bat (also run_diagnostics.bat) in the Imatest installation folder. You will need to open it with Administrator privileges if you want to save changes. The key line with the path information (in my system) is

The highlighted entries in this line are the Matlab Compiler Runtime (MCR) folders. You should check the contents of these folders. If the folder C:Program Files (x86)MATLABMATLAB Compiler Runtimev714 (or its equivalent on your system) is not on this line (only an issue prior to Imatest 3.8), it should be added.

3.6+: mllapack.dll Procedure could not be found (mllapack.dll La procédure spécifiée est introuvable en Français) Imatest starts normally, but terminates with this message displayed in a box. We have seen this problem twice. It was not easy to track down. A solution that worked for one customer (but required some effort) was found at the end of this Google post and also this Matlab Central post.

“I found that the error comes from a dll version problem (as suspected). An older “libmmd.dll” was present in windows/system32 directory. The version that comes with the Matalb Runtime bin/win32 directory was not used. Getting rid of the older version solved the problem. I haven’t figured out yet why it was there and why it doesn’t get updated in the windows directory when installing the vcredist. What a pain.”

One other piece of advice may be worth exploring if this doesn’t work. This Matlab post states that “The crash is caused by an incompatibility between MATLAB and the CPU. This can happen if the processor does not support the SSE2 instruction set, for example, the Athlon XP 2200+ CPU.” This problem should not occur on computers manufactured after 2003.

Pre-3.6: The most common installation problem is a failure of the Matlab runtime library, Imatest-lib.exe, to download or install properly. This results in an error message of the form,

“The procedure entry point … could not be located in the dynamic link library … .dll.”

If you get such a message, check to see if file Imatest-lib.exe has been downloaded correctly. Also, check the status of your firewall. Strong firewalls have caused this problem.

If you fail to find Imatest-lib.exe or if you suspect that it was downloaded incorrectly, download it by right-clicking here or on any of the links in this section, then reinstall Imatest. Imatest-lib.exe is a self extracting zip file that places the Matlab runtime library in subfolder binwin32 and toolbox\matlab of the Imatest installation folder. If problems persist, check to see that these folders are populated, then send e-mail to Imatest support with the text of the error message, if any, that appears in the DOS window.

Pre-3.6: Missing DLL files In rare instances, four DLL files, jpeg_depth.dll, dataread.dll, imjpg8.dll, and rjpg8c.dll, may be missing from subfolder toolbox\matlab\iofun\private of the Imatest installation folder. Because they are not included in Imatest-lib.exe they are installed using a different procedure, which fails in fewer than 1% of installations. If you get a message that indicates they may be missing, you should check for them in the subfolder and install them manually if they are absent.

An image file cannot be read.

Matlab often can’t read image files that have nonstandard headers or other irregularities such as an incorrect file extension (for example, BMP for a PNG file). Such files are rare in commercial cameras, but may crop up in prototype or development systems. You can often “launder” them using Irfanview, which you can download for free from Irfanview.com. It’a a valuable utility! Read the file into Irfanview, then save it. (You can use a different file name if you need to keep the original.)

This problem may be caused by automatic translation software such as Youdao Dictionary.

Temporarily disable the translation software while performing a ROI selection. There is more about this issue on Region selection bug workaround.

Imatest crashes or does not run as expected

When this happens the Command (DOS) window that normally stays minimized may contain an error message that is useful for debugging. To view its contents,

Most problems fall into the following categories.

You don’t need to know the exact location of imatest-v2.ini in Imatest 3.7+because Imatest has a full set of utilities for locating, editing, saving, and loading it. Its exact location is

A module that formerly worked has stopped working

This can often be fixed by removing the section for the module in imatest-v2.ini (imatest.ini, rescharts.ini, or multicharts.ini prior to Imatest 4.2).

The ini file editor is an extremely powerful tool for editing ini (settings) files.
You can often fix a broken (but formerly working) module by selecting the section
corresponding to the module, then clicking Delete section, Save.

You can select a section to view or delete from the Section dropdown menu (near the top). To edit an individual line, select it in the large window, make the change in the edit window just above the large window, then press Enter. To delete the entire selection, press Delete section When you are ready to save the changes press Save, which is grayed out until changes are made. If you with to cancel your changes, press either Reload ini file or Close.

If you cannot solve the problem, send an e-mail to Imatest support. Details on how to do this can be found by pressing the Error reporting button at the bottom of the Imatest main window.

For Imatest errors that shut down the DOS window (this has become rare), or where extra diagnostic results may help in locating a problem,

In some instances you can fix the problem by deleting imatest-v2.ini (or renaming it, which is better because you have a record). Instructions here.

Path conflicts when other versions of Matlab are installed

If a different version of Matlab from the one used for Imatest (6.5.1) has been installed on your system, there is a tiny chance that you may experience a path conflict that causes a similar error message— or Imatest may simply fail to run. This rarely happens because the batch file that initiates Imatest sets the path. Path issues and solutions are discussed in the Imatest IT EXE instructions.

Bugs and all that

Pre-3.6: The following message appears several times in the DOS window when you try to save data.

Function ‘get_param’ is not implemented in standalone mode.

This has no effect on the saved images, and it’s rarely visible since the DOS window remains in the background. Matlab has described the problem, to be fixed in a future release, here.

Instructions for individual Imatest modules can be found in the Imatest Documentation page.