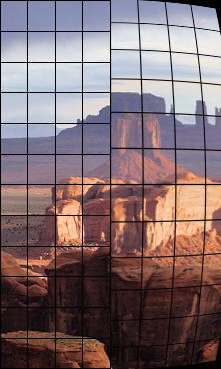 Lens (optical) distortion is an aberration that causes straight lines to curve near the edges of images. It can be troublesome for architectural photography and photogrammetry (measurements derived from images). The simplest approximation is the 3rd order equation, ru = rd + krd3 where rd is the distorted and ru is the undistorted radius. Depending on the sign of k, it can be either "barrel" (shown on the right) or "pincushion." A mixture known as "mustache" distortion may occur for complex lenses which are better described by a 5th order approximation (ru = rd+ h1rd3+ h2rd5) .

Distortion is worst in wide angle, telephoto, and zoom lenses. It often worse for close-up images than for images at a distance. It can be easily corrected in software.  For more details see Distortion: Methods and Modules.