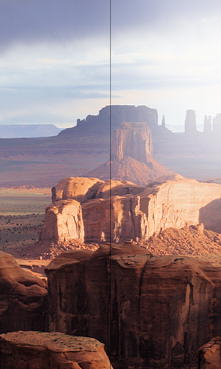 Flare, AKA Veiling glare is stray light in lenses and optical systems caused by reflections between lens elements and the inside barrel of the lens. It predicts the severity of lens flare— image fogging (loss of shadow detail and color) as well as “ghost” images— that can occur in the presence of bright light sources in or near the field of view. (It does not measure the ghosts in detail.)

Veiling glare is measured by Stepchart using a standard Kodak Q-13 or Q-14 step chart mounted beside a “black hole,” i.e., a box lined with black behind a small opening, mounted on a large white board, as described in detail in Veiling glare.

Veiling glare can only be measured reliably with RAW images, preferably decoded with gamma = 1, because image processing (especially conversion to sRGB color space) can affect the “toe” (dark) region of the tonal response curve, which is critical to veiling glare measurements. Special care must be taken to distinguish pixel offsets (minimum pixel levels in sensor or camera outputs— built into some video/cinema color spaces such as Rec. 709) from flare light.