Imatest SFRreg performs highly automated measurements of sharpness (expressed as Spatial Frequency Response (SFR), also known as Modulation Transfer Function (MTF)) and Lateral Chromatic Aberration from images that contain registration mark patterns (circles with two light and two dark quadrants). Unlike standard test charts, these patterns do not need to be located on a flat (planar) surface. Since Region of Interest (ROI) detection is automatic, they may be positioned where needed. Depending on the image source, they offer several advantages. You can

Registration mark charts, such as the one shown on the right, may be purchased from the Imatest store or printed on a high-quality inkjet printer.

This document introduces SFRreg and explains how to obtain and photograph the chart. Part 2 shows how to run eSFR ISO interactively inside Rescharts and how to save settings for automated runs. Part 3 and Part 4 illustrates the results for slanted-edge and other measurements, respectively. 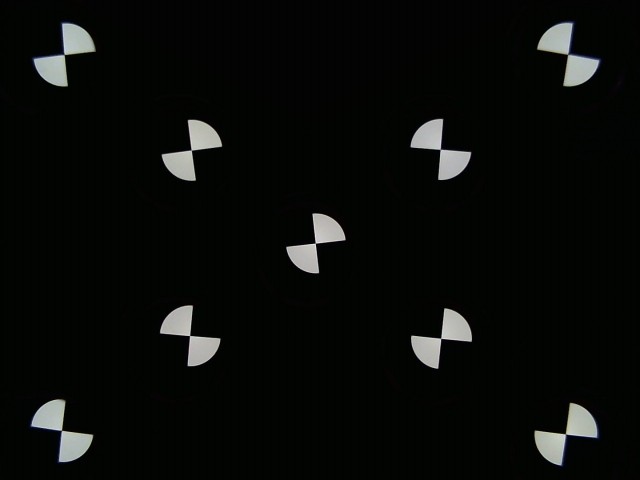 Image acquired from a 9-projector system

SFRreg also works with printed registration mark patterns, which can be placed anywhere in the image. For extreme wide-angle (fisheye) lenses, they should be oriented facing directly towards the camera. You can add other charts— typically color or grayscale— to the image for additional measurements. 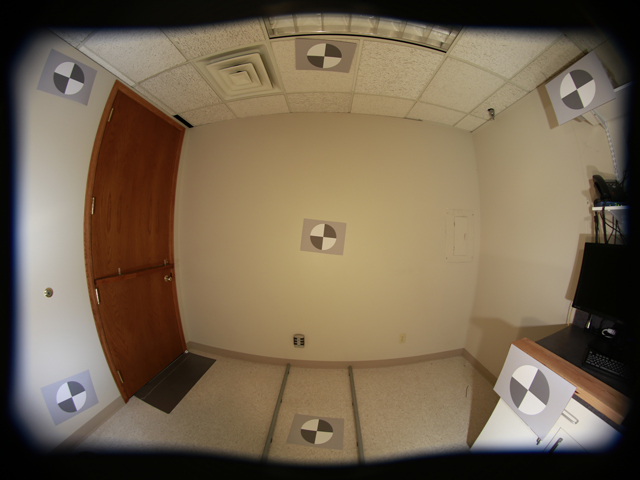 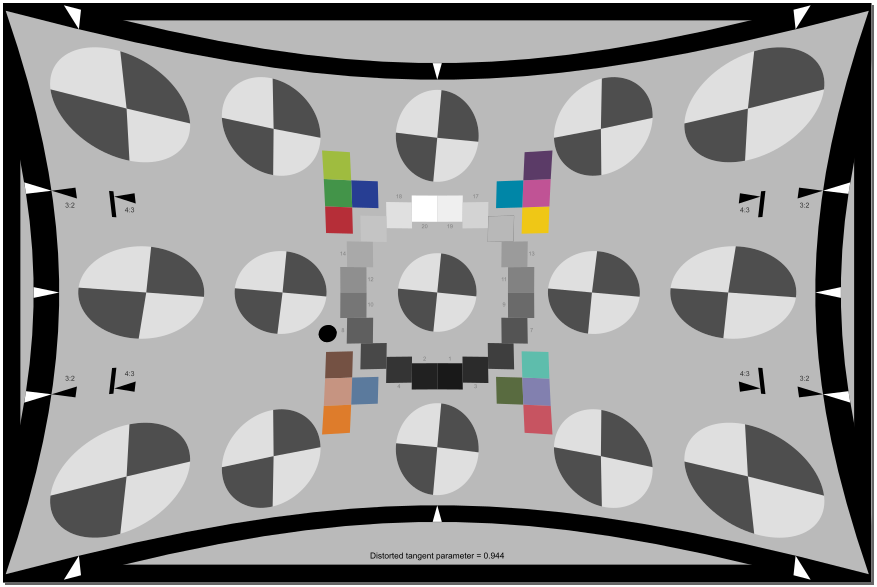 Though the primary purpose of the SFRreg targets is to allow MTF measurements at arbitrary locations in the camera Field of View (FoV)  (and at arbitrary distances, for maximum versatility), users may need a dense set of MTF measurements near the camera’s center of FoV as well as tonal response, noise, and color measurements. In order to to make this more convenient, we have developed the SFRreg Center chart (which is similar to the ISO 12233:2014 chart).

NOTE: This target does not automatically perform color. tone, noise, tilt, rotation, FoV or Distortion calculations in Imatest versions prior to 5.0. All but FoV and Distortion will be added in 5.0.

This chart can be placed in the central portion of the image, typically subtending 90 to 100 degrees horizontally (but other angles are available). The 90 degree chart is shown on the right. It is used along with single SFRreg charts located elsewhere in image, and typically facing the image (not in the center chart plane). Top views representing some potential arrangements (for a 240 degree camera FoV) are shown below. The charts on the sides typically represent two (or more) charts located in the corners (and possibly sides) of the camera’s field. These are merely suggestions: other arrangements may work better, depending on the angular field of view and camera’s pixel resolution. For example, for smaller angular FoVs, it might be sufficient to have only one set of added charts (at each of the 4 corners).

When either of these arrangements are photographed with a fisheye camera with the expected Field of View, the resulting image looks something like this. 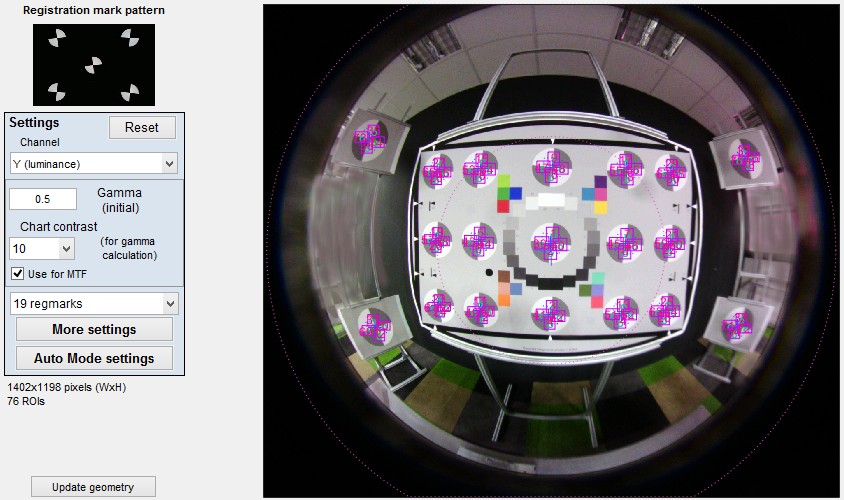 A portion of the SFRreg setup window for an image with an SFRreg center chart and four individual charts.
Field of View is approximately 180 degrees. 19 registration marks have been selected.

When using the SFRreg Center Chart, take care to photograph it with the same recommendations as for other resolution-determining test charts. This involves lighting the chart evenly, choosing the correct size and distance, and ensuring reasonable exposure.

Similarly, any single SFRreg targets should be placed at least at a great enough distance away from the camera so that their printing resolution is not a factor. Due to the ability to place SFRreg targets anywhere in a scene, it is not possible to recommend a typical lighting set-up. While even lighting on a target is important to have for both slanted edge analysis and automatic detection of SFRreg targets, it may not always be possible to achieve.

The SFRreg marks should be positioned to avoid pure horizontal, vertical, or 45 degree edges. Typical edges are 2-7 degrees off of horizontal or vertical, though other orientations like sagittal/meridional edges are acceptable.

The following guidelines should be followed as closely as possible for the automatic detection routines to work correctly:

Registration Mark charts can be purchased from the Imatest store in a variety of inkjet media (reflective and transmissive) (Other media will be available on request.)

Although we recommend that you purchase the charts, they can be printed on photographic-quality inkjet printers, but you must have fine materials, skill, and a knowledge of color management. For more details, go to SVG Charts. Here are the recommended settings. 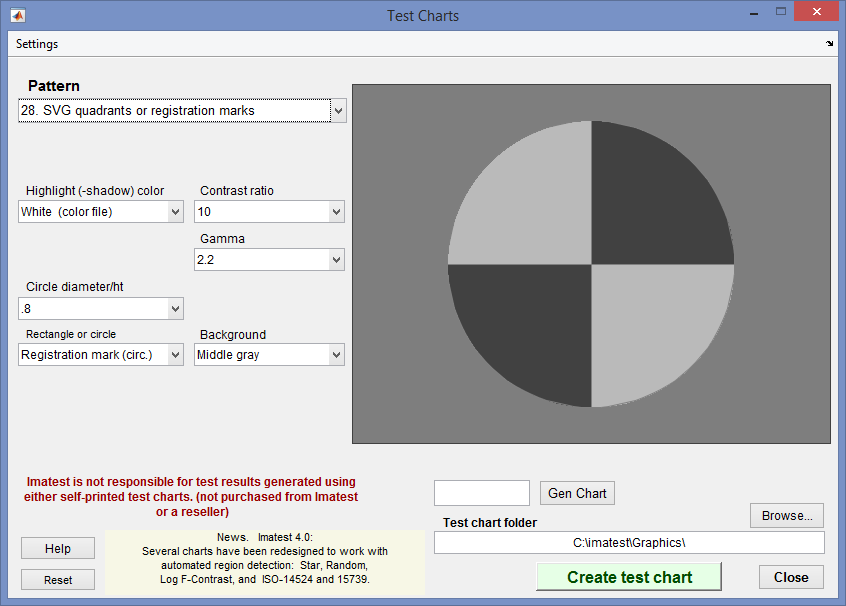 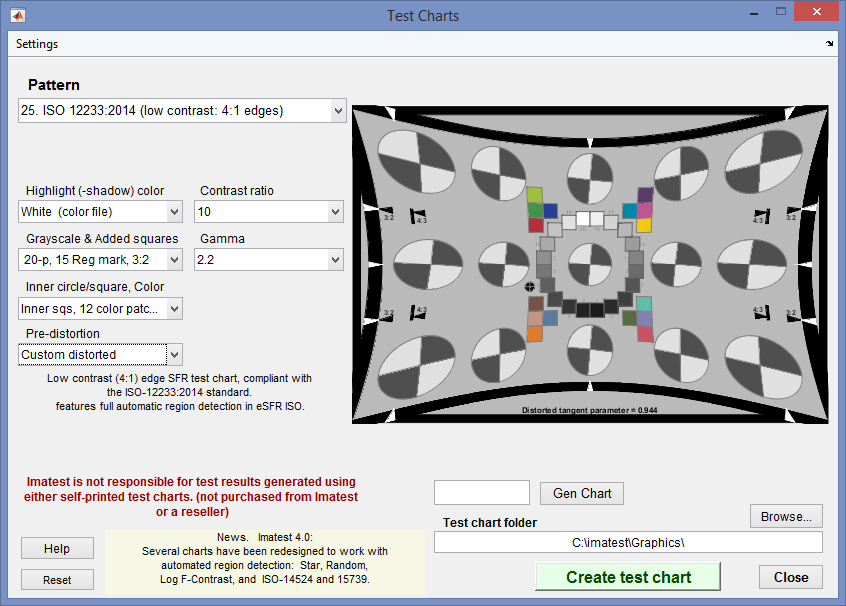 How to Read MTF Curves by H. H. Nasse of Carl Zeiss. Excellent, thorough introduction. 33 pages long; requires patience. Has a lot of detail on the MTF curves similar to the Lens-style MTF curve. Even more detail in Part II. Their (optical) MTF Tester K8 is of some interest.