Screen Patterns displays a variety of test patterns on monitors, preferably on LCD flat screen monitors. It may become more useful as cost-effective ultra-high resolution (4k+) monitors become available. It is opened by clicking on Screen Patterns on the right of the Imatest main window. Most patterns (except perhaps Monitor calibration) perform best with the window maximized. You may need to redraw the pattern after maximizing (or resizing) it by selecting the pattern or changing one of the settings. These patterns are offered as a convenient alternative to the printed patterns created by Test Charts.

The pattern is selected with a dropdown menu in the bottom-middle of the Screen Patterns window. The patterns intended for photographing tend to work poorly with CRTs because of the raster scan, which can cause nonuniform illumination and may cause inconsistent readings with some DSLR metering systems (like my Canon EOS-40D). The patterns are summarized in the table below.

Some of these patterns have no well defined uses, but we include them because customers often find uses we cannot anticipate. Adding charts to Screen Patterns is relatively straightforward. Please contact us if you’d like to have one added.

Several patterns display the W x H screen size in the lower right corner. H is smaller than the total screen size by about 21 pixels: about the hight of the upper toolbar.

If you have a flat screen LCD monitor, the Screen Patterns Light Falloff pattern is a good way of obtaining an even, uniform image. This is the first pattern that appears when you open Screen Patterns.

Maximize this pattern for best results. Hue, Saturation, and Lightness (H, S, and L, which default to 0,0,1) can be adjusted using the sliders on the far left. HSL and RGB values are displayed at the bottom. Photograph it at a distance of 1-3 inches (2-8 cm). (Thanks to Jonathan Sachs for this suggestion.)

For extreme wide angle lenses or laptop screens with a limited viewing angle, an additional diffuser should be used. We recommend using opal diffusing glass mounted close to the lens. Opal glass is available in the US from Edmund Optics. If a diffuser is used, a lightbox may be substituted for the monitor. (Lightboxes are typically brighter but less uniform.) 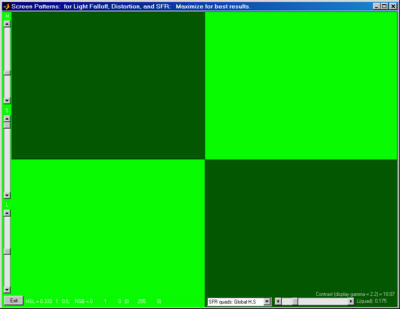 There are two quadrant patterns for SFR measurements:

Vertical and horizontal bar batterns are also available. They’re near the bottom of the selection list.

The monitor should be tilted (typically around 5 degrees) with respect to the camera when this pattern is used for SFR measurements. (The pattern itself is not tilted because this would result in pixellation.) This use of this pattern is discussed in Imatest SFR LCD target.

Highlight H, S, and L can be controlled with the sliders on the far left. Quadrant Lightness (L) can be controlled with the slider on the bottom-right. The contrast for display gamma = 2.2 is shown on the lower right. In this case (pure green; not the default), the lower right slider has been adjusted for a 10:1 image contrast. The L slider on the left is set to 0.5 for maximum color saturation.

The distortion grid creates images for the Imatest Distortion module consisting of black lines on a white or colored background. (Checkerboard patterns with the Checkerboard module is preferred.) It works best with the window maximized. (The image may need to be redrawn after resizing.) It should not be used with CRTs, which are notoriously subject to distortion, except to measure the distortion of the CRT itself using a lens of known low distortion. 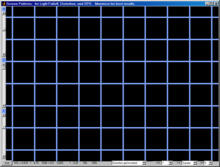 Normally the lines are black and highlight (background) H, S, and L can be controlled with the sliders on the far left. If Distortion grid inverted is selected, the background will be black and the H, S, and L sliders will adjust the line color.

This selection contains several patterns that enable you to check your monitor’s calibration. The gamma patterns (left and middle) must be viewed on a monitor; they do not work in printed media. Reset pattern restores the default values, H = 0, S = 0, L = 1, and Gamma = 2.2.

Note that laptop LCD screens cannot be accurately calibrated because gamma is a strong function of vertical viewing angle. 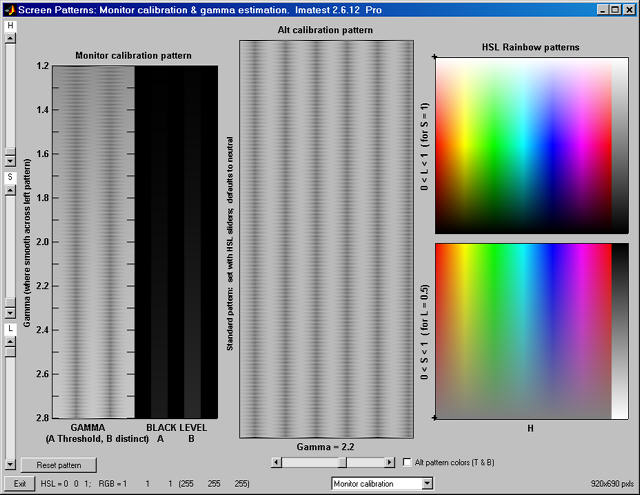 Monitor Calibration patterns (the serrated vertical bands
in the left and middle patterns are not what you see.)

This chart enables (shown below) you to set the black level (brightness) and estimate display gamma over a range of 1.2 to 2.8 with accuracy close to ±0.05. The gamma pattern is on the left; the black level pattern is on the right. Before using the chart, CRT monitors should be turned for on for at least 15 minutes. For flat screen (LCD) monitors, Screen resolution should be set to the monitor’s native resolution (right-click on the wallpaper, Properties, Settings).

Gamma is estimated by locating the position where the average luminance across the gamma pattern is constant. The corresponding gamma is shown on the left. You should be far enough from your monitor so the line pattern is not clearly visible. The example below shows what to look for.

Black level (brightness) Your monitor’s brightness control (which should actually be called black level) can be adjusted using the mostly black pattern on the right side of the chart. This pattern contains two dark gray vertical bars, A and B, which increase in luminance with increasing gamma. (If you can’t see them, your black level is way low.) The left bar (A) should be just above the threshold of visibility opposite your chosen gamma (2.2 or 1.8)– it should be invisible where gamma is lower by about 0.3. The right bar (B) should be distinctly visible: brighter than (A), but still very dark.

There is considerable interaction between the brightness and gamma settings in CRTs— increasing brightness decreases gamma– so you may have to go back and forth two or three times. There is less interaction between Contrast and gamma. The vertical bars correspond to normalized luminances of 0.002 and 0.006 at the specified gamma.

The image on the right shows the middle gamma pattern enlarged 4x. The upper part of this image, to the right of Standard, uses the same black-to-white sinusoidal variation as the Gamma and black level chart. The color patterns appear when the Alt pattern colors (T & B) box, located just to the right of the Gamma slider, is checked

When this image is displayed normal size (not enlarged; below) on a good quality monitor, the R-C, G-M, B-Y, and Standard patterns appear nearly identical. 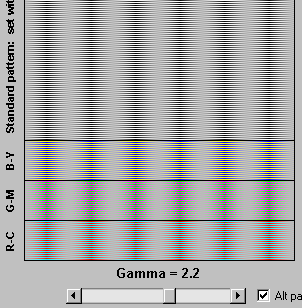 Middle: Gamma pattern. This pattern will look uniform when the gamma slider (just below it) is set to the correct monitor gamma. It is very sensitive: it can measure gamma to better than ±0.05 accuracy: The spatial frequency of vertical bands is set close to the the frequency where the human eye’s Contrast Sensitivity Function is maximum for typical viewing situations.

The patterns on the right will appear uniform

A checkbox labeled Alt pattern colors (T & B) is located just to the right of the Gamma slider. When this box is checked, three bands (six total) appear near the top and bottom of the gamma pattern. Instead of the standard gamma pattern’s normal black-to-white sinusoidal variation, individual lines vary from Blue-to-Yellow, Green-to-Magenta, and Red-to-Cyan. In a normally functioning monitor these bands appear the same neutral gray as the standard pattern, but they could look strange in a defective or poorly calibrated monitor. Unchecking this box speeds image refresh.

Right: HSL rainbow patterns. These patterns are used for a rough visual estimate of the monitor’s color performance. They should appear well-saturated and have smooth color and tonal gradations (no abrupt changes). Laptops typically look very different from well-calibrated LCD or CRT monitors. 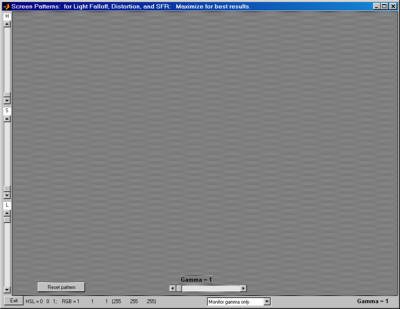 The full screen gamma pattern allows you to examine screen uniformity in fine detail. It is identical to the gamma pattern in the middle of the Monitor calibration display, described above. Gamma can be estimated with excellent accuracy: to better than ±0.5.Hightlight H, S, and L can be controlled with the sliders on the far left. Reset pattern restores default values: H = 0, S = 0, L = 1, and Gamma = 2.2.

The zone plate is useful for testing camera focus in cameras with live view because it produces highly visible moiré patterns when it is photographed or resized; the stronger the moiré the better the focus. It works best with the window maximized (it may need to be redrawn after resizing.) Northlight Images describes a way of using the zone plate to tune the focus of the Canon 1Ds Mark III. The Squares patterns below are also designed to generate moiré.

Screen Patterns has two versions of the zone plate: sine (shown below) and bar (with stronger edges: possibly better for focusing). 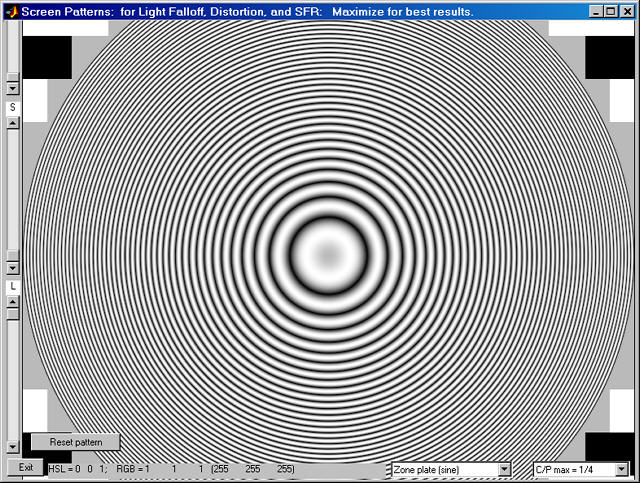 The maximum spatial frequency can be adjusted with the menu on the bottom right. 1/4 cycles/pixel (half-Nyquist) is the default. Highlight H, S, and L can be controlled with the sliders on the far left. (The H slider was obscured when the image was resized.) Reset pattern restores default values: H = 0, S = 0, L = 1 and also redraws the image. Learn more about zone plates from Bart van der Wolf.

SMPTE color bars are widely used in the video industry for calibrating TVs and monitors. They’re included in Screen Patterns as an experiment— to see if customers find them useful. It’s straightforward to add charts to Screen Patterns: please contact us if you have a chart you’d like added.

The pixel values for the charts are from the Wikipedia page, SMPTE color bars. We are not certain of their correctness. Many pages interpret these bars differently (the colors in the top row are often brighter). Both the original and HD charts can be displayed with the top row of colors lightened.

These slanted edge patterns are similar to the patterns in SFR SVG Test charts. 1, 2, and 3 row patterns are available. H, S, and L (Hue Saturation, and Lightness) can be adjusted for the highlights (i.e., the background), and L can be adjusted for the patches, which retain the same H and S values as the background, similar to SFR Quads: Global H,S , described in SFR quadrant patterns, above. Contrast is displayed on the lower right.

It is important to note that these edges are not as sharp as the vertical and horizontal edges in SFR quadrant patterns because a small amount of anti-aliasing must be applied to avoid jagged edges. These patterns are not generally recommended for testing high resolution cameras, where large printed charts work far better, but they may be useful in testing monitors, projectors, and low resolution cameras. If all cases, you should carefully analyze the relative contributions of the display, camera, and lens to the final MTF measurement, i.e., you should know precisely what you are measuring. 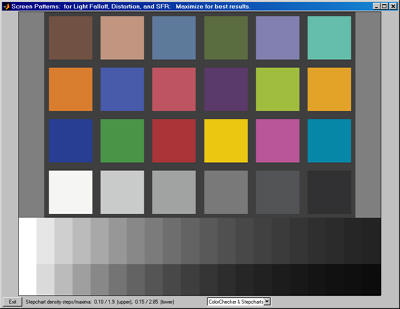 This pattern should never be used for testing cameras: a real reflective Colorchecker should always be used. It can be used to make a simple visual estimate of display quality, and it may also be useful for analyzing the response of displays or projected images when photographed with a well-profiled camera.

These patterns are specifically designed for creating moiré fringing for measuring camera focus with a camera’s Live View feature. See Bart van der Wolf’s post on Open Photography Forums and related material on Northlight Images. The Squares (checkerboard) pattern (left, below) is an alternative to the grid chart in Distortion.

The spacing between squares (1-30) or the number of squares (for Squares (checkerboard) only) can be selected in the window in the lower right.