The primary advantages of Checkerboard are:

The disadvantages of Checkerboard are:

Details of the regions to be analyzed are based on user-entered criteria (similar to SFRplus, eSFR ISO, or SFRreg, which it closely resembles).

Sharpness is derived from light/dark edges in the checkerboard pattern (which should be tilted), as described in Sharpness: What is it and how is it measured?

This document introduces Checkerboard and explains how to obtain and photograph the chart.  Part 2 shows how to run eSFR ISO interactively inside Rescharts and how to save settings for automated runs. Part 3 and Part 4 illustrates the results for slanted-edge and other measurements, respectively. 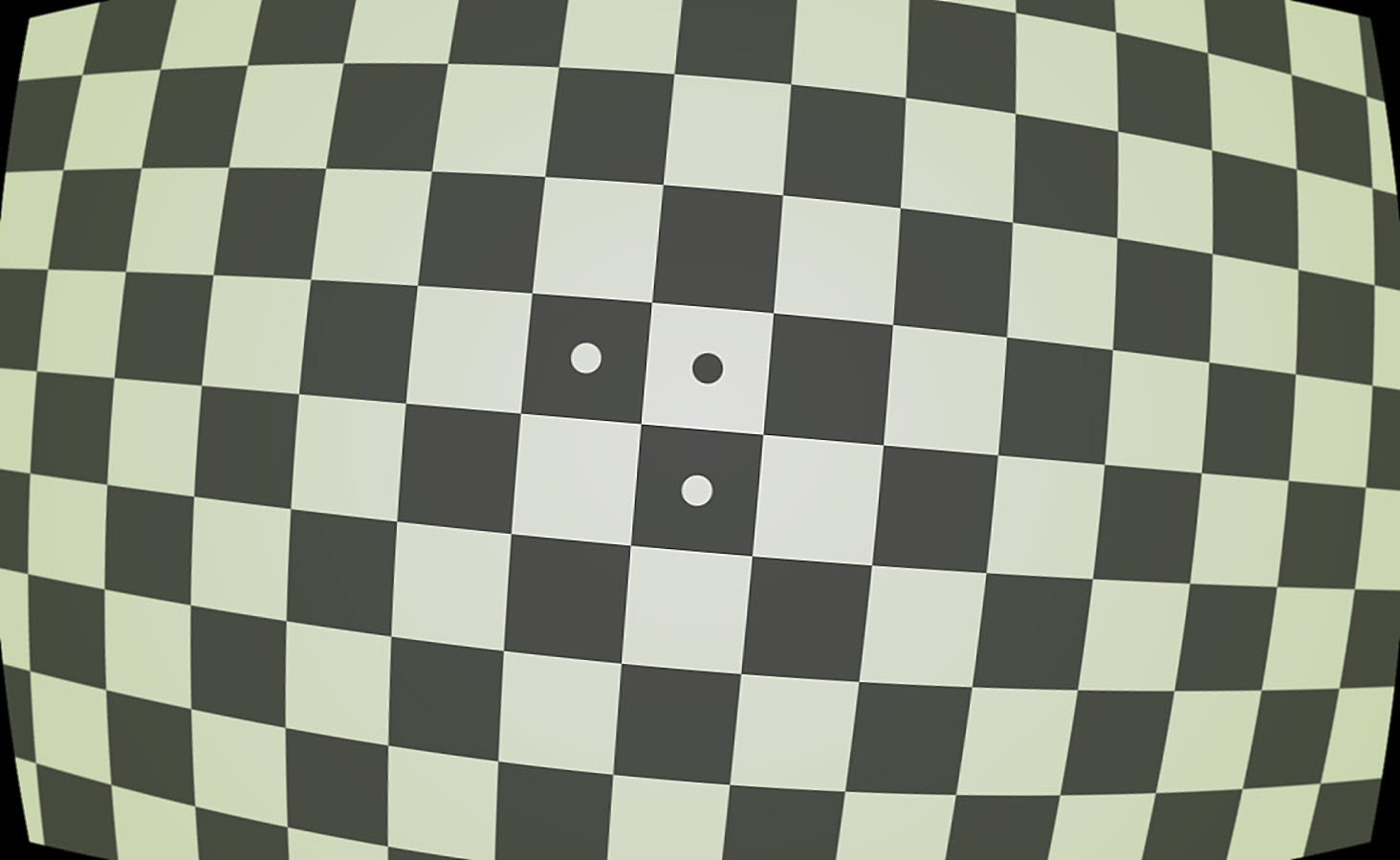 The relationship between the original and corrected image can be displayed (in Checkerboard-only) when Display arrows & lines is selected in the Display options area of the More settings window. The lines in the original image (below, left) give a good visual indication of how well the calculated coefficients correct the distortion.

The magnification for the corrected image can be adjusted a slider on the lower-left of the Rescharts display area.

Checkerboard charts are available from the Imatest store on a variety of reflective and transmissive medium. Although we recommend that you purchase the charts, they can be printed on photographic-quality inkjet printers if you have high quality materials, skill, and a knowledge of color management. Here are the settings. 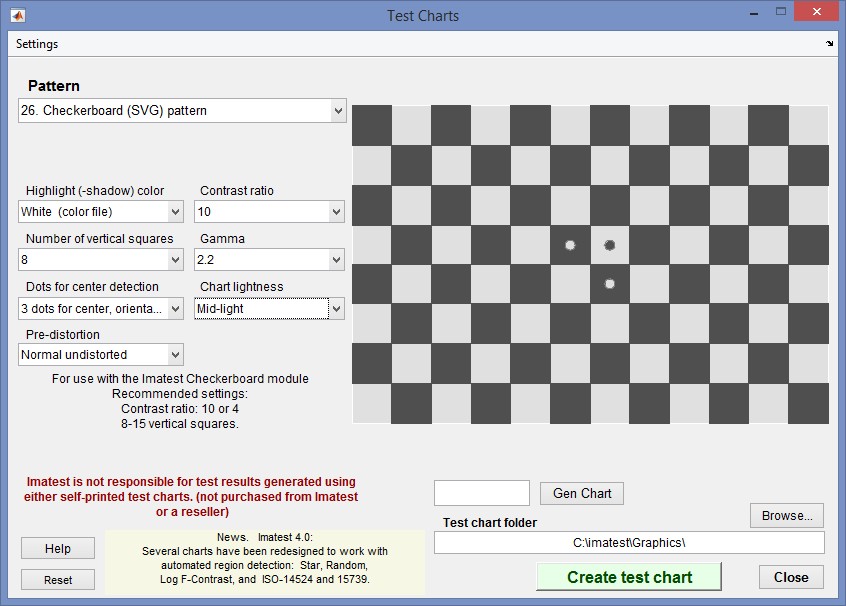 We recommend either 8 or 12 vertical squares. With fewer than 8, the distortion measurement may be less accurate. At least 5 rows of corners (1 less than the number of rows of squares) is required for a 5th order distortion calculation (needed for “mustache” or “wave” distortion). With more than 12, edges may become smaller than optimum for MTF measurements and calculations become slower. There is no practical advantage to more than 12 vertical squares unless you plan to print very large and do a lot of zooming (in and out).

The chart center is defined by the corner between the two light circles inside dark squares. When the circles are present the shift of the chart center (from the image center) is reported.

Framing the chart is not critical. Extreme flexibility is one of Checkerboard’s principal attributes.

The Checkerboard Setup window image below shows the detected corners for an ideally-framed image. To measure regions near corners, the image should not be tilted too much. The image below is tilted 3 degrees, which is sufficient for slanted-edge measurements (except possibly for tiny images) and allows measurements reasonably close to the corners. It the tilt becomes much larger, measurements near the corners become more difficult. This is especially true for the Checkerboard (Matlab) detection algorithm (selected in the dropdown menu on the lower-left), which only detects complete rows and columns. The alternative detection algorithm (Checkerboard (Custom)) is much slower, but often picks up corners that aren’t in complete rows or columns. 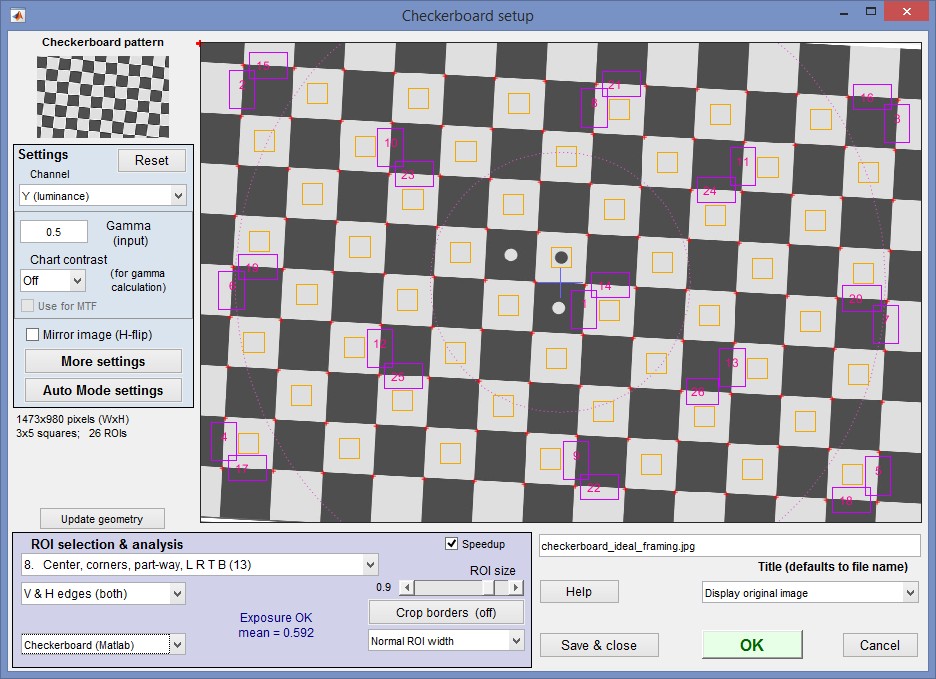 The chart below shows ideal lighting, which may not be achievable for a set of registration mark patterns with fisheye lenses, but it’s good to be aware of. The goal is even, glare-free illumination and to avoid lights shining directly into the camera (which may be an issue with ultrawide fisheye lenses). Lighting angles between 25 and 45 degrees are ideal in most cases. At least two lights (one on each side) is recommended; four or six is better. Avoid lighting behind the camera, which can cause glare. Check for glare and lighting uniformity before you expose. Matte charts are recommended for wide angle lenses; it’s very difficult to control glare with semigloss surfaces.

Some recommended lighting configurations  can be found in Building a Low-Cost Test Lab. The BK Precision 615 Light meter (Lux meter) is an outstanding low-cost instrument (about $100 USD) for measuring the intensity and uniformity of illumination.

A letter-sized (8.5×11 inch) chart printed on Premium Luster paper on the Epson 2200 (a high quality pigment-based inkjet photo printer) was analyzed for MTF using the 6.3 megapixel Canon EOS-10D. There was no change when the image field was at least 22 inches (56 cm) wide— twice the length of the chart. Performance fell off slowly for smaller fields.

Good exposure is important for accurate Checkerboard results. Neither the dark nor the light regions of the chart should clip— have substantial areas that reach pixel levels 0 or 255. The best way to ensure proper exposure is to use the histogram in your digital camera. Blacks (the peaks on the left) should be above the minimum and whites (the peak(s) on the right) should be below the maximum.

The above image (taken from the Canon File Viewer Utility) is close to a perfect exposure. Some exposure compensation may be helpful.

If the folder contains meaningless camera-generated file names such as IMG_3734.jpg, IMG_3735.jpg, etc., you can change them to meaningful names that include focal length, aperture, etc., with the Rename Files utility, which takes advantage of EXIF data stored in each file.

You are now ready to run Imatest Checkerboard.

How to Read MTF Curves by H. H. Nasse of Carl Zeiss. Excellent, thorough introduction. 33 pages long; requires patience. Has a lot of detail on the MTF curves similar to the Lens-style MTF curve.