A pattern on an LCD screen may be used for SFR measurements using a pattern generated by the Imatest Screen Patterns module, which has several patterns to choose from. These patterns are convenient, but somewhat limited in usefulness because an LCD screen can only cover a fraction of the image frame, hence you can’t produce a good map the camera’s MTF response.

The Screen Patterns module is opened by clicking on Screen Patterns on the right of the Imatest main window. When it first comes up, it is completely blank (for use with Light Falloff). Select SFR: Quadrants ON, SFR: Quads: Global H,S, SFR Vertical bar, or SFR horizontal bar, then maximize the window. The L level of the quadrants (upper-right and lower-left) may be selected for desired contrast (for display gamma = 2.2). Here is the Screen Patterns window set for 20:1 contrast (the current recommendation is 10:1 or less). 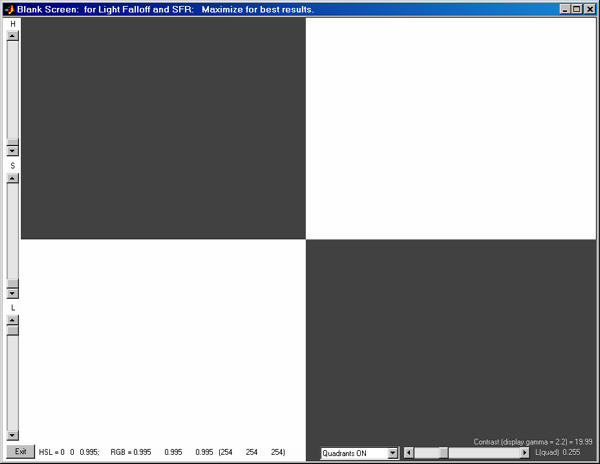 Screen Patterns offers a number of options; for example, the highlight Hue, Lightness, and Density can be adjusted so you can photograph a variety of colors. SFR: Quads: Global H,S sets the H (Hue) and Saturation (S) levels in the quadrants to the same values as the highlight region so you can obtain single-color patterns. 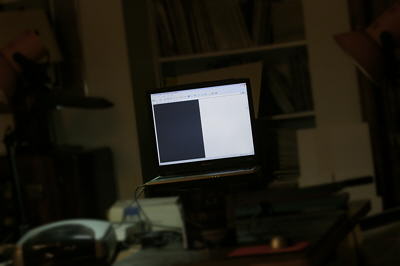 When you display this taget on a LCD screen, be sure to maximize the Screen Patterns window. To avoid Moire fringing (interference between the LCD and camera sensor pixels) and chromatic aberration from the R-G-B pixel pattern, the LCD screen image should take up no more than 1/3 to 1/4 the width of the total image (1/9 to 1/16 the area).My old laptop, shown on the right, displays 1024 pixels horizontally. The Canon EOS-10D has 3072 horizontal pixels. In this case, the laptop image should take up no more than 1/4 the image width.

Since the screen occupies only a small portion of the image area, be sure the camera is focused on the screen!