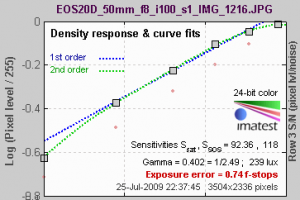 ISO sensitivity (also called ISO speed), is included in Release 3.5 of both Imatest Master and Industrial Testing (IT) packages. ISO sensitivity is a measure of how strongly an image sensor and/or camera responds to light. Both Saturation-based and Standard Output Sensitivity, as described in ISO 12232, are calculated, but the measurement procedure has been considerably streamlined as compared to the ISO specification. The calculation is included in four Imatest modules– Stepchart, Colorcheck, Multicharts, and SFRplus– when the incident light level in Lux is entered. Now imatest users can quickly and easily analyze ISO sensitivity, as shown in the sample results below for a stepchart image captured with a Canon EOS 20D camera. “ISO Sensitivity was the only major image quality factor not supported by Imatest software, and we are pleased to offer our customers this important new feature” said Norman Koren, Imatest CTO.