Imatest SFR measures spatial frequency response, also known as the Modulation Transfer Function (MTF), of digital cameras using a slanted-edge (light-to-dark) target, as described in Sharpness: What is it and how is it measured? Although it doesn’t provide the as strong a visual indication of MTF as wedge or sinusoidal chats (such as Log Frequency), it provides a more accurate quantitative measurement and uses space much more efficiently.

Imatest SFR also measures Chromatic aberration and noise. A standardized sharpening algorithm can be used to compare cameras with different amounts of sharpening (not recommended for camera development or lens testing).

These instructions also apply to the Rescharts Slanted-edge SFR module, which is performs identical calculations with a more interactive interface.

The SFRplus and eSFR ISO modules performs identical slanted-edge calculations using special test charts that enable automatic region selection and offer numerous advantages. If you are just starting MTF testing and if the available geometries fit your needs, we recommend one of these two chart/module combinations.

Obtaining, assembling, and photographing the target

You can run Imatest SFR with any clean, sharp, straight black-to-white or dark-to-light edge. The solid areas need to be smooth and uniform: dark on one side and light on the other. For best results contrast should be no more than 10:1; 4:1 is recommended in the ISO 12233:2014 standard. 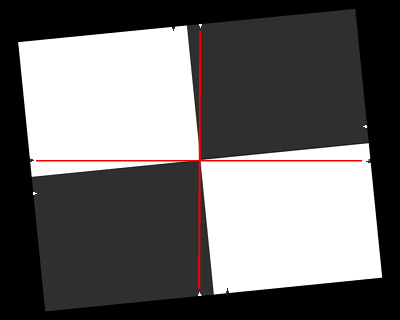 The use of guide marks for tilting the chart

Print the test image with a high quality inkjet photo printer on semigloss, luster paper, or high quality matte paper. Alternatively, send it to a lab to be printed. Dry Creek Photo has an excellent listing. If you are printing small charts, print several to measure center and edge sharpness. Be sure the edges look clean and sharp to your eyes; examine them with a good magnifier or loupe. Chart quality is described in detail in Chart quality and distance, below.

The bitmap charts are intended to be tilted approximately 5.7 degrees (anywhere between 2 and 7 degrees is OK) when they are photographed. They are tilted 5.7 degrees when the tick marks, located near the edges, are vertically or horizontally aligned with the center. This is illustrated by the red lines on the right. Imatest Master can analyze edges of nearly any angle; exact horizontal, vertical, and 45° edges should be avoided for best results.

Bitmap charts are printed straight and physically tilted because the edges print sharper that way. If they were printed at an angle, the printer dot pattern could cause some jaggedness. A 5.71° angle (tan-1(0.1)) is an offset of one part in 10. SVG charts are less affected by tilting.

The following target is described in detail in Building a low-cost Test Lab. It can be used to measure lens performance near the center, part-way out, and near all four corners. The Log F-Contrast and Star charts to the left and right of center are not necessary for lens testing; they provide information about signal processing. Many other chart arrangements and added charts (the X-Rite Colorchecker, for example) are possible. Since 2009 we have used the SFRplus chartfor most of our lens testing. 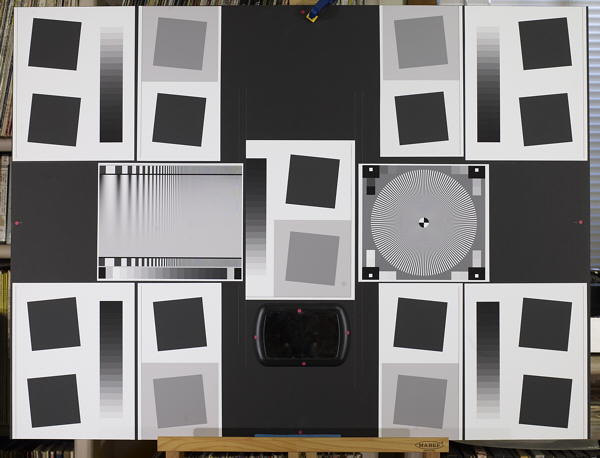 Sharpness target (30×40 inch) for cameras up to 13 megapixels

The printed charts are mounted on 32x40 or 40×60 inch sheets of 1/2 inch thick black foam board with spray adhesive (such as 3MTM 77 or Photo Mount) or double-sided tape (such as 3MTM Positionable Mounting Tape 568, which comes in 16 and 24-inch widths). If a ColorChecker is substituted, Velcro is recommended so it can be removed for dark storage. 1/2 inch foam board stays flatter than thinner boards. Black board results in less flare light than white board. (Flare light is light that bounces between lens elements and off the inside of the lens barrel, reducing image contrast.) 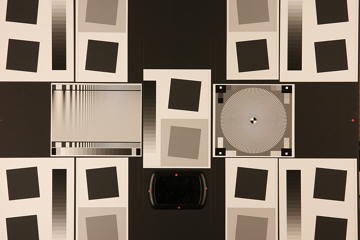 If possible, frame the chart so there are usable edges near the center, part-way out, and near the corners. Take care that the chart is properly aligned. A number of useful alignment techniques and tricks are presented in Building a low-cost Test Lab. 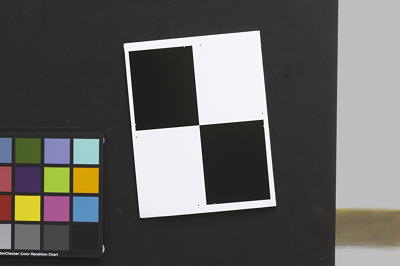 A letter-sized (8.5x11 inch) chart printed on Permium Luster paper on the Epson 2200 (a high quality pigment-based inkjet photo printer) was analyzed for MTF using the 6.3 megapixel Canon EOS-10D. There was no change when the image field was greater than 22 inches (56 cm) wide— twice the length of the chart. Performance fell off slowly for smaller fields.

Commercial photographically-printed charts are often have better chart MTF than inkjet printers can achieve, and hence may be used at shorter distances— microscopic in some cases (chrome-on-glass charts).

Cameras with more pixels, and hence higher potential resolution, should should have a larger image field width.

Proper exposure is important for accurate Imatest SFR results. Neither the black nor the white regions of the chart should clip— have substantial areas that reach pixel levels 0 or 255. The best way to ensure proper exposure is to use the histogram in your digital camera. Blacks (the peaks on the left) should be above the minimum and whites (the peak(s) on the right) should be below the maximum.

Low contrast test charts (with contrast ratios of 10:1 or lower) are helpful for avoiding clipping. The revised ISO 12233 chart (due out in 2012) has a contrast ratio of 4:1.

The above image (taken from the Canon File Viewer Utility) is close to a perfect exposure.

Save the image as a RAW file or maximum quality JPEG. If you are using a RAW converter, convert to JPEG (maximum quality), TIFF, or PNG. The file name should be descriptive and should indicate the parameters you are testing. The Imatest View/Rename Files module makes this easy. Use dashes and underscores ( – and _ ), but avoid spaces. (Spaces work with Imatest, but they can be troublesome in DOS command lines and web pages.) An example would be Canon_EOS10D_70-200f4L_100mm_f8_ctr.jpg.