The coordinate axis order is which coordinate is first in an ordered pair. Imatest coordinates are (x, y) pairs. (y, x) pairs are not implemented in Imatest geometric calibration.

The reference index is the pixel location of the origin. It is related to the programing languages used and whether they are a 0 (e.g., C, C++, Java, Python) or 1 (e.g., MATLAB, Fortran) indexed language, leading to reference indices of (0, 0) or (1, 1).

The standard world coordinate system in the Geometric Calibration Module is shown here: 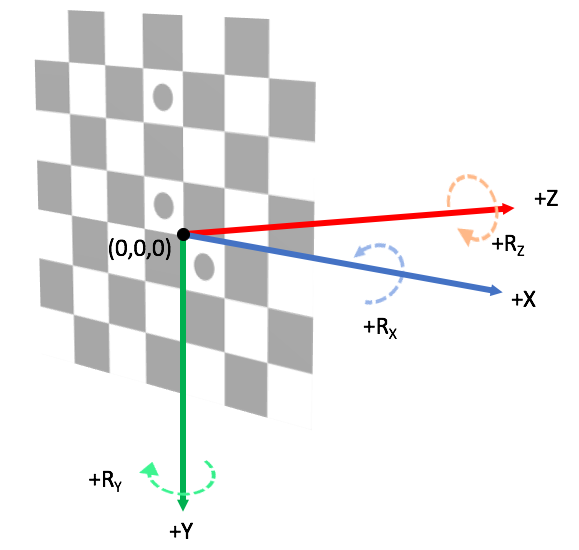 Default Imatest world coordinate system. The target center is the origin of the world. Positive-X is “chart right”, positive-Y is “chart down”, and positive-Z is “towards front of chart” (a typical camera pointing direction).

Points and objects in 3D are manipulated by rotation and translation matrices. Cameras are described by a pose (not a transformation of points). The camera center in the pinhole model is the location of the entrance aperture of the physical camera.

The coordinate axis order is which coordinate is first in an ordered pair. Imatest coordinates are \((X, Y, Z)\) triplets. Triplets in other orders are not implemented in Imatest.

Imatest uses a right-handed definition of rotation. The handedness of rotations may be changed by modifying the flip_world_axis INI field