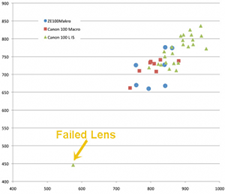 In the first part: “There is No Perfect Lens“, Roger explored about the sharpness variability that is inherent to consumer-grade lenses:

“My first thought when seeing more variation than expected was our testing methods weren’t accurate. So we refined testing methods, eliminated bad copies, and tested only new copies. The variation was still there.

“Like most people testing lenses, we used Imatest. But maybe a lens-test projector would be better. Nope. Well, the gold standard was MTF measured on an optical bench. So we (despite the vigorous protestations of those-who-manage-the-money) bought an optical bench. It showed a similar amount of copy-to-copy variation.”

In the second part: “There is No Perfect Lens Test, Either”, Roger compares testing using Imatest to the expensive optical bench. He makes some valid constructive criticisms about how a variation in SFRplus region selection can lead to different reviewers having a variation in their test results.  Roger also writes about how chart quality can be the limiting factor for measurements, and the importance of testing multiple focus distances. 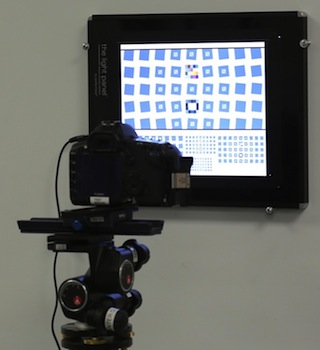 “My first Imatest results showed that the Nikon 105mm f/2.8 Micro just wasn’t that great. But, guess what? Even with my smallest charts I was shooting it at an 8-foot distance. When we developed techniques using high-resolution backlit Imatest targets shot at 1 foot distances more appropriate for a macro lens, it turned out to be a great lens.”

Roger concludes that while he will use Imatest for the majority of his testing needs, he will continue use his optical bench for testing wide angle lenses, and for testing lenses at infinity.

“For testing purposes, I’ll be using both Imatest and an optical bench. Having the ability to check both infinity and near focus is a huge plus (I’ve seen a number of lenses that were out-of-spec at one distance but not another).  For wide angle lenses, the optical bench is a probably better for screening, even if it has limitations for lens reviews.”

“For macro lenses, physically large lenses, and lenses with very long focal lengths, the optical bench is not particularly useful and Imatest will continue to be our test of choice. Imatest is also a more logical choice for lenses likely to be used at fairly close distances. “

Highly barrel-distorted (“fisheye”) wide-angle lenses can be tested with pre-distorted SFRplus test charts, and lenses can be tested at large virtual distances (up to infinity) using conversion optics (collimators) with high precision (typically chrome-on-glass) SFRplus test charts. This enables manufacturers to test longer focus distances in factory environments where space is limited. Be cautions when selecting collimators since their optics may degrade the measurements: some systems on the market were designed for NTSC TV systems (a far cry from high resolution digital cameras).

In the section on Focus Distance, Roger discusses the effects of relatively close focus on MTF measurements. He offers the example,

This brings up the important question, what is the effect of finite focus distance?, i.e., how do results differ from infinity focus? To answer this, we first note that it’s the relative distance— the distance to the chart divided by the lens focal length (and not the absolute distance)— that counts.