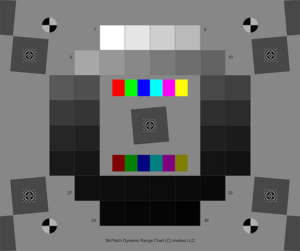 Find out more about Imatest 3.9, see a detailed list of enhancements, and contact us to renew your license.

In the past year we have deployed Imatest IT on assembly lines in the mobile imaging industry supply chain, including camera module manufacturers and device assembly factories. Many performance, functionality and documentation enhancements have been added to ensure accurate high-speed assembly line testing. Contact us to learn more, or request a free trial license.

Manufacturers can now use Blemish Detect to test displays in the lab and on assembly lines. Blemish Detect can test for stuck on/off pixels, luminance uniformity, and color uniformity. Testing can be done on any type of flat screen display – including smart phones, tablets, computer monitors, and large-screen TVs. Contact us to learn more.

This chart offers a wider dynamic range and low noise. Compared to the previous chart, this chart is easier to frame, easier to select regions, and will give more consistent exposures. It is also affected very little by light falloff of the lens.

We will be touring China, Japan, South Korea and Taiwan from February 10th to 28th. Please contact us to schedule on-site consulting and training.

Imatest is growing with the help of Jeff Herman, who we’ve brought aboard to lead business operations. Jeff can be reached at jeff@imatest.com and he welcomes any comments or feedback you have on Imatest.

Happy holidays from everyone at Imatest. We wish you sharp resolution in the new year.

This entry was posted in Uncategorized.