Imatest is proud to announce the official release of its new 4.0 image quality testing software. The Imatest 4.0 upgrade includes a number of refinements including enhanced automation capabilities and a more robust image quality testing experience. Improvements are found across all three of Imatest’s core products: Master, IS (Image Sensor) and IT (Industrial Testing). Below is an in-depth and complete list of all Imatest 4.0 enhancements. 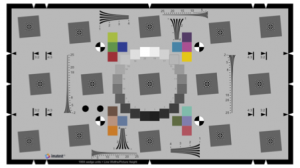 We offer an Enhanced version of the chart that adds six additional slanted squares near the sides and corners, color patches, and wedges for visual vanishing resolution estimation or analysis with the Imatest Wedge module. Because the added features are outside the area of the chart defined by the ISO 12233:2014 standard, the Enhanced chart remains 100% compliant with the standard. We also offer an Extended chart for measuring wide 16:9 aspect ratio cameras.

Compared to the previous ISO 122233:2000 standard, this new chart and software provides a dramatically better experience for engineers: automated region detection, more consistent measurements due to fewer nonlinearities, a much better map of sharpness over the image surface, tonal response measurement, and much more. 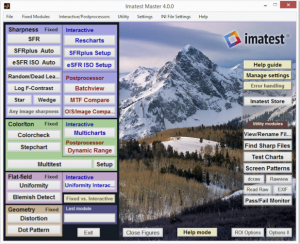 The Imatest main window has been redesigned to be larger with a more logical layout: buttons for Random/Dead Leaves, Log F-Contrast, Star, Wedge, and Any Image Sharpness have been added. For convenience, a Last module button has been added, which displays the most recent module run by Multitest. Modules are organized into sections based on test functionality.

The Help mode button alters the window so that all buttons display their corresponding website instructions.

Imatest can now read many different video file formats, allowing the user to select frames to be analyzed. Support for Targa (TGA), ArriRaw (ARI), and DPX (digital cinema) files has been added. Not all DPX variants are supported: please send us files you have trouble reading. 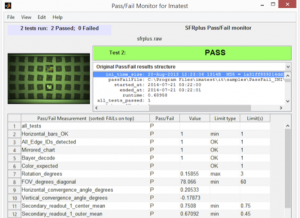 The Pass/Fail monitor is a module designed to run in the background as other modules (such as SFRplus, eSFR ISO, Blemish Detect, and others) are run. Whenever a module for which pass/fail criteria have been specified is run, the P/F monitor is updated. In essence, the monitor provides a detailed preview of the pass/fail results of Imatest IT.

We now offer unprecedented support for a plethora of cameras and frame grabbers:

The Imatest IS Push-interface is a C++ Library for Windows that enables images to be passed directly into Imatest IS for analysis by any Imatest module. This provides the ability for signal processing pipeline vendors to view the effects on image quality that result from modifying the parameters of their image correction and enhancement routines in their tuning software by utilizing Imatest’s analysis capabilities.

This feature speeds up repeated SFRplus runs for real-time focus tests by not recalculating SFR region position unless there is a significant change in the position of the slanted edges. This prevents the user from having to restart SFRplus within Imatest IS every time the chart geometry changes.

Imatest 4.0 offers numerous enhancements, improved automation and greater adjustability to facilitate your image quality testing. If you have not yet purchased Imatest software and are interested in taking advantage of Imatest 4.0’s powerful capabilities, click here to view product specific upgrades. For our current license holders, we invite you to verify your upgrade eligibility by clicking here.

This entry was posted in Company, Product.