Our product pricing and shipping rates do not include import duties, taxes or fees. The customer / recipient is responsible for these expenses.

Video (Watch on our site)

* As measured to the outside of the black border.

The Enhanced and Extended Versions are also available with Extra Wedges. For higher megapixel versions of this target: click here.

The Imatest Enhanced ISO 12233:2017 eSFR chart has all the features of the Standard chart, keeping the 3:2 aspect ratio, with the addition of six added slanted squares for measuring performance near the image boundaries and hyperbolic wedges for visual analysis or analysis with the eSFR ISO module. It also has 16 color patches when produced with technologies that allow color. Since these additions are in regions of the chart not covered by the standard, compliance with the standard is unaffected. The Enhanced Version is also available with Extra Wedges. Maximum Wedge Frequency of 4000 LW/PH is better for higher resolution camera, but it is only available with the 4x size chart.

The differences between the Enhanced and Standard Versions are as follows: 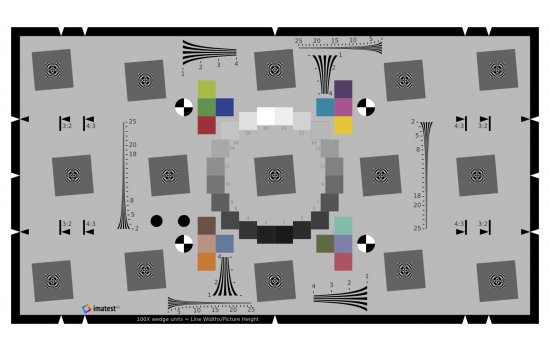 The Imatest Extended ISO 12233:2017 eSFR chart has all the features of the Enhanced chart (six extra squares, wedges, and 16 color patches where possible), but has a 16:9 aspect ratio, which makes it suitable for HDTV and cinema measurements (and it also works well with 3:2 aspect ratio DSLRs). It is fully compliant with the standard. The Extended Version is also available with Extra Wedges.

SFRplus can be run either through the highly-interactive Rescharts interface or as a batch-capable fixed module. The key documentation for getting started is Using SFRplus Part 1, found in the SFRplus section of the Documentation page. We recommend framing the chart with a small amount of white space above and below the top and bottom bars. Badly-framed charts can be analyzed with SFR using manual ROI selection.

Megapixel suitability is based on analysis of Modulation Transfer Function (MTF) obtained from a chart image captured using a 1:1 magnification lens (Canon 65mm f/2.8 1-5x macro) and a 6.5µm pixel size sensor (Canon EOS 6D). In order to consider performance throughout the cameras range of expected sharpness, MTF90 (the spatial frequency where MTF is 90%) is weighted at 0.5, MTF70 is weighted at 0.35, and MTF50 is weighted at 0.15. Conversion to megapixels is based on the Imatest Chart Quality Index (CQI) calculation which determines sensor height suitability using the equation 2 * MTFxx (cycles per object mm) * vertical chart height (mm), where xx is 90, 70 or 50. Megapixel suitability calculations assume that (1) the lens is of high quality, (2) that the chart fills the vertical field of view (vFoV) of the camera system, and (3) that the sensor aspect ratio is 3:2. For 16:9 aspect ratio sensors (with pillarboxed framing, if applicable), multiply the megapixel suitability by 1.185. For 4:3 aspect ratio sensors (with left/right sides of chart cropped), multiply megapixel suitability by 0.889. Charts can be suitable for significantly higher megapixel counts if the minimum resolvable feature size of the lens is larger than the pixel size or the chart fills less than the full sensor vertical field of view.

*Please Note: When Matte surface is selected, the OECF 14524 chart does not meet the standard for maximum density.

This entry was posted in .