The correction factor is turned on by default in Imatest 4.2+. It is set by pressing Settings, Options III in the Imatest main window as shown below, then checking the box for the correction. We strongly recommend leaving on the LSF correction factor, i.e., the box should be checked.

More details about Imatest’s ISO compliance can be found on the Sharpness web page.

Here is the corresponding equation from ISO 12233:2014, Annex D. Note that E-SFR(k) is the symbol for edge-based SFR, not a subtraction: 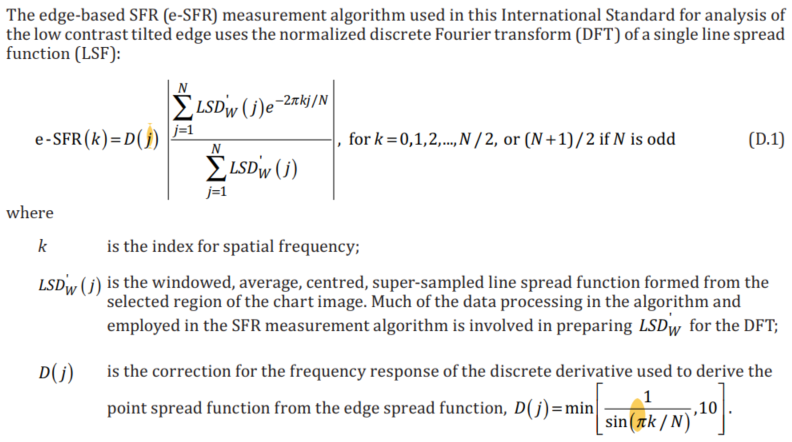 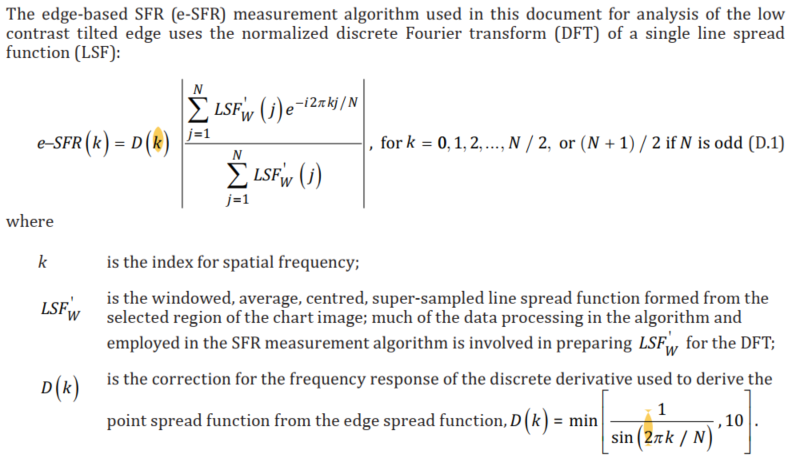 The LSF correction factor is enabled by default. To check or change the setting, click Settings (in the Imatest main window), Options III. You can check or uncheck the Use LSF… checkbox as appropriate, but we recommend leaving it checked. The checkbox sets derivCorr in the [imatest] section of imatest-v2.ini to 0 (correction off) or 1 (correction on).

To observe the effects of the LSF correction factor, we use an idealized edge, tilted 5 degrees, shown on the right. You can click on it to download it for your own testing.

The ideal edge increases uniformly from 0 to 1 over a distance of τ = 1 pixel.

Here are the results without and with the LSF correction factor. Note that gamma has been set to 1 because the idealized image is not gamma-encoded. The results with LSF correction are much closer to the expected value of 2/π = 0.6366. The difference is likely due to digital sampling and the numerical binning/oversampling process: the average oversampled edge shown in the figures below is slightly rounded. Also, the edge rotation correction that is not applied to edges slanted by less than 8 degrees. The edge rotation is not included in the ISO standard and so is not applied to edges that fall under the ISO standard algorithm.

The idealized image has much more energy above the Nyquist frequency than typical high quality images. Here is an example for a high quality camera showing the effects of the LSF correction factor on MTF50— the most commonly-used summary metric.

The difference may not be significant for many applications.

The new correction factor is turned on by default in Imatest 4.2+ releases.

You can override the default, i.e., turn the correction factor on or off, by clicking Settings (in the Imatest main window), Options III, and checking or unchecking the Use LSF… checkbox as appropriate. Once the setting is saved, it will be retained across all future versions unless changed by the user. The default calculation be selected unless you manually change it in Options III window.

We strongly recommend leaving on the LSF correction factor, i.e., the box should be checked.

For industrial testing with pass/fail thresholds set up with the old calculation, we recommend either: